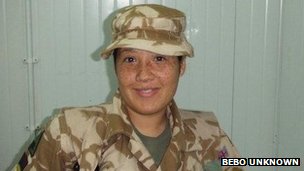 Two British military personnel were killed in Afghanistan on Wednesday and a third was injured.  The fatalities were Cpl Channing Day (pictured) and Cpl David O'Connor (no picture available).

Cpl Day was 25 and belonged to 3 Medical Regiment.  She came from County Down.  Cpl O'Connor was from Hampshire and served with 40 Commando.  Both died in the same incident in the Nahr-e-Saraj area of Afghanistan.

The cause of their deaths is still unclear.  A BBC defence correspondent in Kabul said that an Afghan source reported the pair were killed by an Afghan ally, but other locals disputed this.  The MoD said the UK patrol was 'not working with any Afghan partners at the time' yet the Telegraph runs with a story contradicting this.

UPI reports they were killed by friendly fire from another British unit.

Regardless of circumstances, two young British people are now dead and two families' lives will never be the same.

A total of 435 British Military personnel have been killed in this dreadful war since operations began in 2001.

Thanks for continuing to remind your readers of the escalating cost to our sacrificial service personnel, of our senseless involvement in an unwinnable war.

Gentlemen, it's the very least I can do for the sacrifices so many have made.

Never forget "There but for the grace of God go I". Anyone of us could be a parent of a child who joined the military.

Really sad news. Losing two brave souls. I suspect most folk are just lost for words and tired of saying the same thing over and over.
Why are we there ?
When can we leave ?
Can our troops be kept safe until we leave ?
Will anyone ever be held to account for this pointless slaughter ( on both sides) ?

Monty, that's exactly what politicians rely on - people getting tired. Once they're tired they begin to accept the situation.

How many other situations have we all accepted in that way?