Who Are The Complainers? 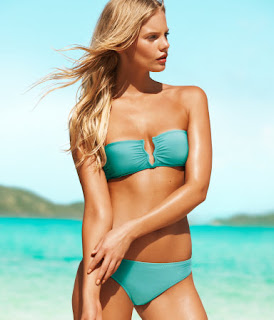 The image is from the Swedish retailer H & M's website.  Recently the company undertook an outdoor campaign to advertise its swimwear.

The advertisements attracted a variety of complaints to the Advertising Standards Authority (ASA), including claims that the campaign was degrading to women and that it was unsuitable to be seen by children.

Who are the complainers?  The public should be told the sources of such complaints because nowadays, in this ridiculously political correct society in which we live, it seems all to easy for individuals - or companies - to tag any image which 'offends' them as degrading and unsuitable for children.

Only yesterday, because of a handful of complaints, Edinburgh airport's bosses placed a white vinyl cover over the 'offending' parts of an advertisement which featured Picasso's Nude Woman in a Red Armchair and asked National Galleries of Scotland to remove the poster and replace it with something less controversial. The advert was intended to promote the National Galleries of Scotland's new exhibition 'Picasso and Modern British Art' which opened on 4 August.

Having ignored the painful and simple lessons of the Martha Payne affair - banning something is often the fastest route to embarrassment - the airport bosses instructed the white vinyl was removed and an apology given to NGS with the admission that the airport's administration had reacted too hastily to the few complaints.

There is positive result from such complaints though - the advertisers gain a mass of free publicity.  And rightly so.
Tweet
Posted by subrosa at 09:37

It reminds me of when I was working in the middle east. All our British newspapers had been gone over with a thick black felt tip pen. All 'naughty' bits redacted. Even Sally Gunnel's armpits didn't escape the censors ( she was holding a Union Jack flag aloft).
It's sad to see the UK following suit.
The muslim jogger in the ladies athletics yesterday was being labelled a 'harlot' back home for showing her face in public. Even when covered from head to foot in cloth it still isn't enough for the 'conservative' muslim. This is why pandering to minorities is so dangerous. They're never happy and will always push for more.
It would be interesting indeed to see who these complainants are.

When an advert (not in this case, but a general issue) is seen by millions but is pulled because of one complaint then you know that it is all to do with political correctness and nothing to do with any serious issues.

Tyranny of the minority.

Whose (political) version of political correctness is the true version?

O/T but anent your previous two blog posts, I see that Guido Gawkes has now picked up on your Ian Davidson story and the Scotsman reports that a majority of Scots Olympic medallists are state-educated.

It is dangerous RM because it chips away at our own culture. That's why it worries me.

But why are they pulled because of one or a few complaints SBML? I'd like to know who the complainers are. Are they the competition? Or perhaps those from another culture? It would be interesting to know because this is happening more and more.

What a lovely day. I was off to see Andy Murray's postbox in Dunblane but have heard fans have picked much of the gold from it and it is having to be repainted. Think I'll wait a week or so.

I thought some of you may enjoy it Hamish. Takes me back to my youth - I wish. :)

Yes, only yesterday a friend phoned and said she thought it was only the rower and Chris Hoy who had been privately educated.

Hi SR,They complain because they can, and people are so worried and yes, frightened about this type of "PC" complaint that they comply immediately.Its a "power trip"for the complainer. Local council here just replaced a gate onto a "bridal path" because of ONE complaint from ONE fool that said they wanted to ride a horse on this path.Very much doubt if said horse rider will ever attempt it as the path right at the gate is overgrown and humans on foot have difficulty in places, and the path is crumbling,its just not safe for the weight of a horse,but,Hey, its their government given right to DEMAND and get, even health and safety is ignored.
The gate is steel but can be left wide open because of the difficulties of where and how it was fitted,supposedly it self closed but eventually the inevitable will happen and the farmers sheep will be out.The old wooden swing gate did every thing required,just kept horses out. The annoying thing is that it cost two mens wages for a day plus the cost of the gate,at least another £500 on the costs of the council.And for years the farmer has been trying to keep fools on horses away from his sheep and cattle.

"It was unsuitable to be seen by children"

Are we to assume that said children are no longer allowed on beaches, and by the seaside generally?

And you can't rule out advertisers' competitors either.

You shouldn't be viewing such images Apogee. Bad for your blood pressure. :)

I should have thought of getting a horse and maybe the large development here would have been stopped.

Just how stoopid are councils with our money.

Keep us up to date. Will be interesting to know if the phantom rider appears.

It's all nonsense microdave isn't it, but it's dangerous nonsense.

That's true Joe. I just wonder how much the complainers are investigated to see if they're bona fida.

XX It's sad to see the UK following suit. XX
Quite. Add the downer they are now having on "alcohol", it makes you wonder WHO exactly is pulling the strings.

Coincidence that the country that puts most money into spreading a certain "culture" around, is also the same country that spends billions in Britains defence industry?

I take exception to that!!!

It's nigh impossible to find out Furor. That's why I think the complainers should be made public. If they're so offended then they surely wouldn't mind having their view publicised?

XX If they're so offended then they surely wouldn't mind having their view publicised? XX

Well, it used to be one of the foundation stones of British justice, that the accuser must make the accusation "face to face". In a court.

However, I have given up trying to make head or tail from what is laughingly called "justice" in the U.K these days.

It is NOT the justice I was taught in my police training.

In fact any resembelance is purely coincidental.

It's certainly not the justice I understood as a young person Furor.