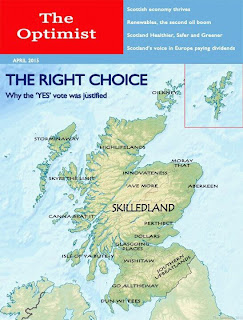 click to enlarge
The past couple of weeks I've been involved in a DIY project involving litres of Dulux satinwood, gallons of emulsion, rollers, brushes, several sheets of sandpaper and varying degrees of patience. All this activity evolved from the January sales when I was offered  carpet at a price I couldn't refuse. It was initially intended for the hallway but somehow, during the measuring up visit, the living room became involved and thus the D-I-Y grew like Topsy.

Although my time at the computer has been limited, I didn't miss some of the deluge of outrage from Scottish independence at the Economist's 'Skintland' cover which I found mildly amusing, although a little crass.  It's not the greatest piece of satire but It certainly didn't upset me or give me cause to vent my spleen against the Economist which is well known for its Tory views.

However, one independence supporter, with an intact sense of humour, has contributed an excellent rebuttal (image above). There are some clever additions in the comments such as Edinbraw, oil by the Barra and the river Going Forth.

Another blogger expanded on the Economist article with their usual articulate contribution which is well worth reading and promotes the positive with a humorous graphic and the subtitle 'Skint? Us? Think again Engloaned'.

This is how independence supporters should be reacting to unionist criticism - with intelligent responses. Faux anger does nothing for the cause and tends to display nationalists as small-minded and always looking for an excuse to become aggrieved about England.  That's not how I want independence supporters to be portrayed.  Most of us are confident, relaxed and are happy to argue their case without reacting furiously to a little mischief from the opposition.

Dare I suggest that some stop being 'pure affronted' (as they say in Glasgow) and find their sense of humour.

The 'offending' front page of the Economist - for those of you who missed it - is below. 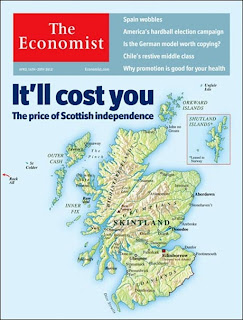 Both covers show that humour & creativity is alive & well both sides o' the Border.

When some people can't smile at other's portrayals of them, it's a sad day.

I did however expect a torrent of renaming English Towns.

Apart from it not being overly funny I don't think not having a sense of humour is the point. It's the spirit of the thing, its just all a bit churlish & haughty coming from a London-centric publication. Someone has pointed out, what other country has been the target of such an onslaught, especially by such a close neighbour?

A lot of folk think this is targeting the SNP and I think that's what The Economist was trying to do but they've inadvertantly slagged off an entire country.

If a Scottish publication had done that about England there would be hell to pay, I mean, look at the reaction you get if you fail to be positive about their football team.

What Scots-people think about it isn't really the point either, its a casual smearing of Scotland's image in the world that sort of bothers me, (if I can say that without sounding like an ardent nationalist.)

Its just not particularly helpfull on any level for any one in the long run.

Today, I posted on a new nation called Bustamania. Scotland should not have all the fun.

O wad some Pow'r the giftie gie us
To see oursels as ithers see us!
It wad frae monie a blunder free us,
An' foolish notion:
What airs in dress an' gait wad lea'e us,
An' ev'n devotion!

Sticks and stones
May break our bones
But words will never hurt us.

Ooops sorry cabalamat but it's not my map. Perhaps you could suggest that on the link given.

I thought of a few when I was doing my domestic duties Joe. Birminging, Tunbridge Wails, Tauntem.

It is a sad day and won't encourage votes. Many people see politics as uninteresting and humour is the best way to engage them.

Pa-broon, I understand your points and agree with them, but we've put up with this type of sneering for generations.

Rather than just protest we need to rise above it. Salmond was right in what he said but comments such as 'racist' don't do us any good.

I like the idea of clever rebuttals rather than the usual squeals of faux anger.

Excellent demetrius. I'm all for an independent Sussex too. It would do very nicely I'm sure.

A very appropriate time for that verse JRB. Thank you.

Not keen on faux anger myself, its more of a disappointed sigh from me with this. The word racist is far to over used as well, it just doesn't apply in this context.

The thing is though, is anyone on the independence side of the argument attacking England in the this way? I haven't seen anything although I understand Joan McAlpine's words (for example) could at times be interpreted in that way, although to do so you'd have to conflate England with Westminster which would be wrong I think.

Its all just a bit peurile and tiresome.

A great post Rosie but I do wish some Scots wouldn't say 'England' when they really mean 'Britain'. England has enough problems of its own without being mistaken for the Lord & Master of the British Isles. We're only a small country (of Regions) ourselves.

There is a fair amount from both sides pa_broon but it's not been so bad lately (or I haven't seen it).

It is tiresome right enough.

GV I usually use the term UK rather than Britain then England when I mean England.

Isn't England the lord and master though? Seems that way from here. :)

"Isn't England the lord and master though?"
It doesn't feel much like it from anywhere North of Watford or west of Dorset.
We, and you lot up there, are ruled by London, which might as well be a self contained foreign country for all it does for anyone outside its borders.