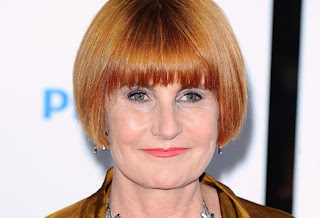 Last month I watched the Channel 4 series Mary's Bottom Line in which retail expert Mary Portas attempted - and succeeded - in boosting the UK's clothing industry by starting her own production line.

It was compelling television. She re-opened the sewing room floor at a factory owned by British nightwear manufacturers Headen and Quarmby.  It was one of eleven thriving textile factories in Middleton and now it is the only one remaining.  Established in 1935, the factory used to employ 60 machinists and produced thousands of items a week before competition from cheap imports forced the company to send production abroad.

But now imports are no longer so cheap and the quality is poor.

Mary decided to manufacture a knicker in a variety of colours. Of course her enviable list of contacts made the promotion of the knickers easier, but what interested me most about the programme was her method of recruiting machinists.  Three of the redundant ex Headen and Quarmby staff were re-employed and, along with Mary, interviewed several young people who were unemployed.  Some had never worked since leaving school but that did not deter the inimitable Ms Portas.  Eventually 8 trainees were chosen then trained by the experienced women. Only one young woman fell by the wayside early in the project.

In the 80s I used to work near a factory which produced clothing for Marks and Spencer - underwear for women and suits and trousers for men.  It was a thriving business employing hundreds and I watched it shrivel to an empty shell in a matter of months. Marks and Spencer had decided to manufacture overseas.  The local economy was badly hit and the expertise of the employees was lost forever.  The factory had been purpose build only 12 years before its demise.

Mary Portas has managed to sell a not-too-special knicker by promoting its Britishness - or should I say Englishness. Every component from the lace to the sewing thread was sourced in the UK.

We all need clothing and factories, in various states of decay, are scattered all over the UK. All too often I hear the 'there are no jobs' mantra, but if our textile and clothing manufacturing industries were recreated - now that cheap imports are increasing in price - there would be a market for their products. Ms Portas' project has proved that with knickers. All that is needed now is for investment into an industry for which Britain was once famous.
Tweet
Posted by subrosa at 09:05

Its not just clothing, we should be looking to become a producing nation again. Manufacturers cite high costs, not just in wages but planning and bureaucracy. Cut all that stupidity out, pay a sensible wage and bingo..... (as they say).

Very true WfW, but clothing would be a good place to start because we all need it.

Excuse me being cynical – but - what a load of pants.

This entire project rode on the minor celebrity status of Ms Portas (friend of a certain Mr D Cameron) and the backing of Chanel4.

If you check Ms Portas’s website ‘Kinky Knickers’ you will see that the product is out of stock at all major retailers. Any retailer will not support for long, a product where the continuity of supply cannot be guaranteed.

I doubt very much that the buyers from Boots, House of Fraser, Liberty, M&S etc will even see me, let alone stock my product when I launch ‘JRB’s Bloomers’.

There's no demand here in Edinburgh. Perhaps there is an empty building somewhere in Morningside where they could manufacture fur coats.

Here's the latest on stock from Mary Portas. Good for her!
The next fashion must have are jute dungarees made by the Oor Wullie fashion hoose in Dundee. Available in black or dark grey. They are partnered with a very urban galvanised steel bucket handbag/stool.

It's time to retire from satire when reality bites back. Good on you D C Thompson!

As JRB says, it's basically a marketing-led product. The whole push of the series is that it's about manufacturing, but in reality, it's actually about the modern British things that we produce - television and branding.

Appreciate your comment JRB, but doesn't it go to show that we don't have the quality of management/sales that we used to have?

Breaking into these big stores has always been difficult but others have done it in the past.

Faux fur of course Hamish? Much lighter weight you see. :)

Dundee was never known for clothing manufacturing Brian was it, but Clackmannanshire etc used to have many factories - now all closed.

Mary Portas proved now only women can be good machinists though and she's kept 8 plus more youngsters in a job. Will be interesting to see if they're still working this time next year.

There's a lot in what you say Stigler, but I think we're even losing our ability to do branding well these days.