Has AGW Been Found Out? 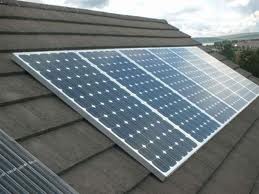 Q-Cells, once the world's biggest maker of solar panels, is filing for bankruptcy.  The German firm says it has abandoned an attempt to refinance its debts and filed for insolvency on Tuesday.

The panel manufacturer has been hit by falling prices and last year the company lost €846m (£702m). It had been trying to organise a deal to swap debt for shares in the company but it said that a court ruling last week, which blocked a similar restructuring for a wood processing company, convinced it that it could not go ahead with its rescue plan.

Last year there was political controversy regarding the giant US solar panel manufacturer Solyndra went into administration.

It's been obvious that solar panels are non-profitable and cannot operate without large subsidies.  Fortunately Scotland hasn't been too badly affected because we lack the regular quality of light required to power the panels, but there are still households which will suffer should they have one of the many now defunct manufacturers panels installed.

Soon, the moment will come when the crowd will say "I always knew it was a fake'.  Here are three signs we are at the beginning of The End [of global warming].  Read it here.

AGW has been found out but it will take much longer to unravel the plots than it took to plan them.  I can wait.
Tweet
Posted by subrosa at 09:28

It has indeed been found out - quite some time ago, actually.

And you're right to say that the regulatory overhang will take ages to get rid of.

I'm not quite so sanguine as you about waiting for that to happen - after all, it's costing us a fortune and ruining our countryside

I amazes me that people fall for these scams. Lots of gardens have solar powered garden lights and ornaments. The very short operating times of these during winter months should give a clear message about the utter futility of relying on this form of power generation in our climate...

Many suppliers quote "Our panels continue to generate electricity even on cloudy days". I have used small PV panels to try and keep a 12 volt battery charged. I fitted a simple charge monitor, which showed that the output often fell below 10% of the claimed value in such conditions. So, yes, they DO continue to work, but the results are pathetic.

We will have a while to wait yet SR before all of these global warming scams are finally killed off.
All the main political parties back the scam and our young folk are being brain washed to believe in the scam so it will be hard to stop the billions being wasted on solar panels, conferences, windmills, reports, studies, 'investment', wave generators, overseas conferences etc etc.

Good news with the solar panels though. The tariffs have been slashed and some mortgage companies are refusing to provide mortgages for houses with a ton of rubbish poorly strapped to flimsy roof tiles. Sellers will find it difficult to sell a house with the rubbish on the roof ( with a signed 25yr contract that gives the solar company 10 times the return of the householder) . So it's not all bad news.

Sadly SR, EVERY electricity consumer in the UK is adversely affected. It's us who pay the subsidies via higher-than-necessary power costs.

Sorry if I sounded laid back Weekend Yachtsman, that wasn't my intention. Like you I'd much prefer speedy action, but we're realistic enough to know that won't happen.

Those making money won't give up until all is lost.

Microdave, these garden lights don't last. They give up after a year or two. I've stopped using them now because regular replacement was costly.

I'm not just speaking about the cheap ones either. I think out of a few dozen I've bought over the years only two lasted more than 3 years.

It will be a while RM. In some ways I feel sorry for those who have been conned into solar panels. There area couple of houses in town with them and I know the owners. They thought they were doing their bit as part of the 'green' revolution.

Yes of course Joe. That was perhaps a rather silly comment of mine. I was thinking more of folk in England where solar panels are more popular.

James Delingpole gets a rare chance to question the BBC's 'settled science' approach to the global warming ponzi scheme here....

Many thanks RM. What would I do without you keeping me up to date.

It's been a busy week here with decorating and feeling a wee bit below par for a couple of days after a back tooth extraction. So your help is greatly appreciated.

Cheers SR. Sorry to hear you're below par. I noticed the heavy chemtrailing over your area in March which won't have done your lungs much good either. They must have been making the most of the fine weather to increase the spraying.

Here's a couple of stories you may have missed.

Are you a racist for being a global warming 'denier' ?


Another few billion wasted on the climate scam in Scotland...

Hi RM, I never noticed that. Someone mentioned there was a big increase in spraying last week but I didn't ask why it was being done so early.

I did miss these so thanks.