Do You Know The Name Of Your Local Councillor? 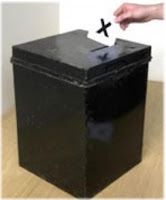 Everyone in the UK must know by now that the election for the Mayor of London will take place on 5 May. Many people even know the names of the main candidates though they have little or no interest in London politics.

The London-centred media has ensured that each day exposure is given to the Boris/Ken circus and excitable political journalists pick over every word uttered by the candidates.

On 3 May there are local council elections in Scotland.  With the exception of a couple of television public service videos, there has been less than a tepid reaction from Scottish political commentators.  Part of the reason is our media is so fixated with the independence referendum - apart from the Scotsman which doesn't have its troubles to seek - they appear to have deleted the local elections from their schedules and that includes the BBC and ITV.  I suspect there will be a couple of highly scripted leaders' programmes on both channels nearer the date, but there will be little intelligent debate.

However, a couple SNP local manifestos have been launched with the focus on transport. I had to smile at Edinburgh's SNP promise to 'carry out vital roadworks at key points in the city to make it as attractive as possible to investors'. Would an accurate translation be 'we will tidy up when the trams eventually become operational?

What about Labour?  Hardly a whisper has been heard from Johann Lamont in recent weeks. Maybe she was writing her party's manifesto. Inspiring?  No.  Comparing Alex Salmond to Craig Whyte isn't a sensible move although Ms Lamont is very possibly aiming her comments towards the Glasgow electorate who have also been treated to the SNP manifesto by Nicola Sturgeon.

Johann Lamont's speech more or less admits defeat but is this a tactic? It worked for the Glenrothes by-election in 2008 when Ian Gray, (the ex-leader), admitted several times they expected to lose yet they won with a majority of 6,737, but will it work again?  I don't think the electorate will be fooled by the underdog approach, particularly when Glaswegians seem to be slowly realising how corrupt their council has been for decades.

Years ago, when I was actively involved in politics, local council elections were vibrant events in which communities participated. Now few people even know the name of their local councillor. Why have so many lost interest?
Tweet
Posted by subrosa at 09:04

Part of the reason must be that the councils are now run like large corporations with a chief executive and highly paid directors. They need little input from the councillors in order to do their job.
It shows in my view that representative democracy is outmoded, though I'm not saying thet the present setup is ideal.

I think the different levels of government are also very confusing. Who knows who is responsible for what anymore?

I think the different levels of government are also very confusing. Who knows who is responsible for what anymore?

Our local elections are on May the 3rd SR. The date was changed to avoid clashing with national elections which will be on the 5th.
It's hard to know who to vote for. 'Independent' candidates quickly revert to their tribal loyalties when back in office.
'Alliances' are dropped just before elections to make people think the councillor is of independent thought.
And of course we no longer know who is running the show with secretive Common Purpose graduates now in place right across the spectrum of council and other public and private services. All talking and networking to each other behind the scenes. Making decisions that will effect us with no democratic mandate to do this. Until we have a complete list of who is CP then we'll never really know why decisions are made and who we can stop voting for.

Oddly enough SR I do, and will be voting for the two I know in the local elections.
What leaves a slight bad taste is that they are Liberals - a party that I despise with a deep passion. It just happens that they are dedicated local people, part of the community and strongly committed to working for the local people. I tolerate their party affiliations only in the belief that they are 'old fashioned' Liberals rather than Cleggists, and because they never mention national politics unless it dictates local actions.

To answer your question - sadly Yes!

Supposedly I and those in my ward are represented by four councillors.

Two ‘Independents’, who like the seeds of a dandelion, initially bunch together but at the slightest hint of any political breeze they drift this way and that without direction or purpose, and if they do settle anywhere they turn out to be nothing more than an inconvenient pest.

And two SNP, who like a couple of cucumbers from the greenhouse thrive in the local climate. But when it comes to trying them, you find them bitter and indigestible and you are left wishing you had grown something else.

As for the other candidates, all are frail delicate little flowers who are not hardy enough to survive in the harsh Highland political climate.

So as for the forthcoming elections, I think this will be a fallow year – not one is worth making the effort for.

Woodsy...your voting choice explains perfectly why things will never change in the UK. Until people stop voting for LibLabCon then they will never get the message and things will continue to go downhill. You're giving them a lifebelt to keep going. Do you not think things would change if they got zero votes everywhere in every election ?
You vote for a party that you 'despise with a passion' because the chap is helpful.
No wonder they call us cattle.

To answer the question - hell yeah. Willie Clarke. Famous for being the only elected Communist in Britain - though now an independent. He should get re-elected with no problems. Even though he's asking for everyone to vote for someone else first (http://bravenewscotland.blogspot.co.uk/2012/04/scottish-local-elections-may-2012.html) the Labour guy will probably get back in too.

I know RMG, I have to hold my nose to put the cross on the paper, but if I and others don't we will get Labour back in this area. Infinitely worse in every respect!
I don't think getting no votes at local level would stop them.
In major elections there is generally a 'protest' vote candidate available, who I always support. But at local level I feel I have to support the only half decent individuals in the race because they are individually good local councillors despite their affiliations. It's a very sad situation.
Anmd yes I guess I could be active as an independent - been there and done that in the past, and did a stint on my then local council - but that's not currently an option for me.

SR -I think your question is rhetorical.

There's a school in philosophy who reckon a chicken is just an eggs way of making another egg.

The same logic can be applied to the present political paradigm whether local, national or international.

The one certainty is it's not a free-range democratic egg.

Labour are definitely trying to manage expectations. The SNP need to guard against overconfidence, especially in Glasgow. The media is almost presenting capture of GCC as a fait accompli, and it's actually going to be VERY hard to be the biggest party.

My councillor is a well-known local businessman who sits as an independent.

He got a good majority last time and probably will do so again.

Certainly he'll get my vote* - he's that rare bird "none of the above" and he does actually take in interest in local affairs.

* Unless a tactical vote seems required, to stop someone else getting in...

Councillors are token gestures these days Hamish. In this area I think the turnout will be exceptionally low.

Linda, I think the problem is that no one takes responsibility for actions. That's where the confusion arises.

Bummer RM. Amended. :) I knew that of course.

CP also concerns me RM. The only way I see to check candidates out is to ask them. Will they say or will they refuse? Possibly the latter.

Allegiances don't matter to me in local elections Woodsy and I'm pleased you have two councillors who do represent the people. Doesn't happen here.

I don't know if we're a ward or an area now JRB but like you, we have 4 councillors, 3 SNP and one Tory. All deem to be very important in the area yet have done nothing of note.

This is the first time I'm considering spoiling a ballot paper.

BraveNew Scotland. Thanks for the link. Doesn't surprise me there's still a Communist in Fife. :)

However, Labour's tactics are dreadful. Will people do as asked?

RevStu, good points and more or less how I see it now that Labour are playing the defeatist card.

I'm sure you realise you're one of the lucky ones WY to have a councillor who earns his stipend.

Subrosa, I think there's a good possibility this could actually backfire on Labour if people do vote for the second Labour candidate in preference to Alex Rowley. There are 3 Councillors to be elected for this ward. The third Councillor is SNP (Ann Bain) and in 2007 they were pretty close to each other in First preference votes behind Willie. Ann had 957 first preference votes and Alex Rowley had 961.

These links were quite interesting SR. The councillors and MSPs' etc seem to be getting bypassed..

Yes, a sound Labour councillor by the name of Paul Carey.

He is getting my vote.

Glasgow is no one's stepping stone. And it surely isn't a separatist city. It was built on loyalty to Union. Let the SNP come if they dare!

Brave New Scotland, I do hope you're right. I've never agreed with candidates who 'instruct' the electorate to behave in Rowley's manner. Hopefully yours will ignore him too.

Thanks for these links RM. As was said on another link CP was Blair's project but the coalition have picked up the banner with enthusiasm.

It's certainly a secret society. I suspect people I know have attended one or more of these courses but it will never be admitted.

I think Glasgow may have a minority administration Dean, but then my assessment is only from general information.

Labour certainly are playing the losers at the moment. Strange position to take.