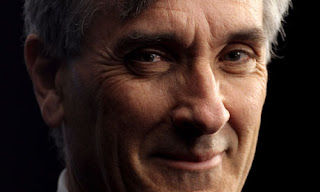 John Redwood has upset Alex Salmond.  The First Minister described his recent remarks - on a blog post - as "spectacularly ill-informed and ill-judged".

The only ill-judged sentence in Mr Redwood's post is 'It is an anti English movement more than it is an independence movement'. A snide, ill-judged remark from Mr Redwood and a remark which understandably annoyed not only the First Minister but most Scots who read it.

John Redwood is a born and bred Englishman with little or no understanding, or even interest, in the Scots. If he had he would be aware that independence supporters are certainly not anti English but anti London rule. A great difference. He prefers to perpetrate the myth that Scots are anti English because it suits his own agenda - he wants independence for England and he sees Scotland as an irritant in his great scheme.

John Redwood is a Eurosceptic and possibly the most anti EU Tory in Westminster. He is convinced England would survive without the EU, whereas many Scots feel membership of the EU is essential to ensure the future of our vital industries, such as fishing.

There is no doubt the EU is in charge of the UK. Some say 85% of legislation is driven by EU directives.

I am also a Eurosceptic and think an independent Scotland could prosper without being a full member of the EU, but I do accept that many in Scotland find having a seat at the table of the EU more agreeable than working via proxy from Westminster.

If Mr Redwood thinks such a stance is anti English then so be it. He insists English nationalism is now the 'new force in UK politics'.

Mr Salmond shouldn't be angry. Imitation is the sincerest form of flattery and as long as Mr Redwood's English nationalism is as outward looking and positive as Scotland's, then English nationalism will flourish. However, I doubt if England, with representatives like Mr Redwood, is mature enough to want a relationship of equals yet.
Tweet
Posted by subrosa at 09:12

What is this collective paranoia from which so many English people appear to suffer?

I hate to spoil their delusional self-indulgence, but for the vast majority of Scots who favour independence, the English hardly warrant any consideration, apart from a few MPs, and that is because of what they are not who they are.

Redwood is all that you said of him. He is supposedly extremely intelligent, but like many intelligent people he:

(a) can't see the wood for the trees

(b) is utter insensible to the feelings of others who may not share his views.

I think it is sensible to sceptical of Europe. It has some extremely bad points, not least its top heavy bureaucracy, and the way that the people at the top big themselves up. (Eg, the daft baroness who wanted a private jet!!!).

But there is much that is good for ordinary people that emanates from Brussels, something the far right of the Tory party find simply irritating. It's money that could have been spent on them!

It is true that that proportion alters from time to time depending on legislation passed. From 1997 to 2009, for example, 6.8% of primary legislation "had a role in implementing EU obligations".

Figures bandied about by the likes of Redwood and Bill Cash bear absolutely no resemblance to the truth. And what would you expect from them? They have a public to satisfy.

It would be interesting to know what proportion of legislation affecting Scotland is made in London.

Redwood's comments do, as you say, show a complete lack of understanding of the Scottish situation.

Rather like him, we dislike the institutions that keep us from making our own decisions. But we don't, as a movement, hate England or the English. It is not them or it, but Britain that holds us back. (The last prime minister who tried to discourage independence was himself a "North Britisher".)

I sadly have to disagree.
But thats the point of a discussion.

I have stated many times I want and independant Scotland but as a Scotsman, I have no hatered of the English but I am upset by the anti-English retoric that is being used.

Mr Redwood may well have chosen his word wrongly but I urge Mr Salmond to choose his own wording when campaigning more carefully.

I expect lesser men like Mr Redwood to be flawed in their commentary.

But like wise I feel an indepoendance battle being fought upon hatred and anti English feelings. That concerns me deeply. I listen to Mr Salmonds wording very carefully and indeed at times I have a huge concern.

Now maybe that has shocked You Rosie !!!

Hi SR, If John Redwood wants England to be Independent, I would be happy to agree with him. I would be hoping that he would agree that Scotland should be completely independent of the EU, which includes England. That after this full independence each country is free to join or not as its peoples wish,as indicated by honest referendum, with any honest trade association, but hopefully not put their necks ever again in anything even resembling the slow motion train wreck that the Englishman, Edward Heath conned us into joining. The EU style of perpetual agreements is slavery, there is no way out. Look at it and think,is a yoke round your neck what you want?
As for Mr Redwood,if he wants out of the EU, the enemy of my enemy is my friend.I do not hate all the English, just the ones that think they have a right to run my country,and have made such a hash of it in the past,and robbed us as well.

Redwood(who is a world class knobhead) Talks about England now he means white mostly male middle class form the south east of England.
He despises anyone from the North especially with an accent his whole life is based around and in the south East.But like many English Torys trys to pretend his support is more widely based than what the facts reveal.

Hi Nico,"The people even in these days of austerity are to well fed fat and content to risk a harder path to a 'possible' new Jerusalem of Independence".

You have hit the nail right on the head.

I suppose all those Scots who support 'Anyone playing England at anything' are just expressing their views on the political system of governance then?

And all the English who live in Scotland and suffer racist abuse because of their birthplace are merely being given a reasoned argument on the lack of democratic accountability under Westminster rule?

Sobers are you saying that Scots in England do not experience racist abuse? Or will you unusually for these type of unattributable paranoid comments provide evidence that shows that per capita, English people in Scotland suffer more than Scottish people in England. It is in the nature of the human beast to be racist, some control it better than others. Listen to some debate from the HOL and hear the undercurrent of racist bigotry taking place in that place of over fed over privileged parasites.

Have a wee read if you will at the forums on the Telegraph, Guardian, Independent, Spectator, The Scotsman, and London Evening News and witness some real swivel eyed anti Scottish racist bigotry, when Scottish independence comes up. It takes a very special country that tolerates it's leader being compared to Mugabe on national TV, to his face. Redwood is simply voicing what others dare not, and will be silently applauding him. However anyone who makes such a plonker of himself as this--------- http://tiny.cc/9ryobw ------------ can safely be regarded as an irrelevance in the grand scheme of things.

My hen laid a haddock, one hand oiled a flea,
Glad farts and centurions threw dogs in the sea,
I could stew a hare here and brandish Dan's flan,
Don's ruddy bog's blocked up with sand.

Dad! Dad! Why don't you oil Auntie Glad?
Can whores appear in beer bottle pies,
O butter the hens as they fly!

Rosie,
The EU is the main cause of the decline of the UK fishing industry. And the decline of fisheries off West and East Africa which have resulted in mass economic migration to Europe and encouraged piracy and Al-Quaeda. Look at two countries outside the EU that the SNP often compares with Scotland, Iceland and Norway, both have retained control over their fishing grounds and both still have successful fisheries.

Horrible waste of space Redwood. Part of the problem rather than part of the solution.
He'll cost us a pretty penny during his 'career' and do nothing useful.
A 'useful idiot' as Marx said.
Only such a useless specimen would accept a role as Welsh Secretary with no clue of their anthem or customs.
Horrible expensive fake.

I think Mr Redwood is a little annoyed people want to discuss Scottish independence and not his particular beliefs JRB.

Tris, I'm sure you're aware that so many people from the SE bubble haven't even visited anywhere north of Edinburgh and have no concept of Scottish life. They don't want to know because they're content ignoring those outside their bubble.

Thanks for these stats. I think they're very cautious and can't find the articles which said the EU had over an 80% influence in some way on today's government.

Considering both English and Scottish courts can take cases to the EC, I think 10.1% is the tip of the iceberg.

I used to have figures stating Scottish only legislation but that was before devolution. It was around 7% if I recall. Minimal.

LotF. I've repeatedly asked folk not to insult others and to rise above the usual stupid drivel from those who have no argument.

No you don't shock me LotF. I tried to be tactful saying Alex Salmond shouldn't be angry. Perhaps I should have said he should have gently prodded John Redwood rather than taking such an aggressive stance.

One thing I have noticed more and more recently LotF, is that Alex Salmond no longer answers any questions but gives a speech to suit. I'm not keen on that either as I want substance.

Hi Apogee, exactly. I really don't hate anyone, but I like some more than others. ;)

Niko, sometimes I despair at the language used by all sides of the debate.

Oh Sobers. Goodness me, not that old chestnut. All the English suffering racist abuse in Scotland? Where are they?

I lived in England (and other places) for many years. The constant 'witty' remarks I tolerated I took in good faith - except when I was called Jock. Being female I found that upsetting.

Both have very successful fisheries Brian and I commend their stance. Didn't Iceland refuse to 'co-operate' about fishing quotas a wee while ago? Good for them.

Redwood is a tyrant in intellectual clothing.

He's a smart one Crinkly.