Where Have All The Tatties Gone? 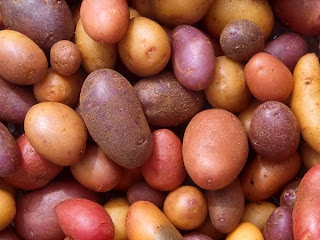 Recently I received the following email from a reader:

As an incoming Sassenach one of the striking features of Glasgow some 50 years ago (and until relatively recently) was the wide availability of local varieties of potato: maincrop Golden Wonder & Kerr's Pink and early Epicure. Largely (I suppose) because of the dominance of supermarkets, they are now hard to find, yet all three have desirable features, especially GW which can hardly be beaten for baking in the jacket. No doubt their cultivation will die completely before long as their non-promotion/availability in the large stores leads consumption & demand to drop. Perhaps this is inevitable. But perhaps something could be done to stem the tide. At least it's a distinctively Scottish topic that should appeal to a Dundee housewife.


I decided to take up his challenge and responded by saying I would contact local farmers for their views. Intrepidity is a word associated with the farming community and not with wee women who couldn't shear a sheep, but nevertheless I gathered my 'reporter' equipment and set off to the wilds of Perthshire. I'd no idea how much the mention of tattie varieties would arouse the emotions of farmers!

Once I managed to overcome their interrogations as to why I was interested in their products, it was very obvious farmers resent the supermarkets' influence over them and I was left feeling great sympathy for their position.

My reader is correct in his assumption that the lack of potato varieties is due to supermarkets, but I was told that if the discerning tattie lover visited a 'proper' greengrocer, they would quite probably be the proud owner of a bag of their favourites within days - if not immediately. Unfortunately nowadays there are few greengrocers in business and when I stated the obvious the reply was always the same: that is the fault of women who buy only in supermarkets.

My investigations showed that varieties of tatties vary throughout Scotland and it's all due to the soil. (I can hear you say 'Arrr it's the sawyl is it?). Yes it is.

Golden Wonders - a potato founded by a Mr Brown of Arbroath - don't have a high yield but it's perfect for crisps. Over the years more and more of the crop go to the making of crisps and because of supermarkets tight shape and size standards, the farmers prefer to sell to Tayto. "Less stressful," was the reason given, although I suspect it may also be slightly more rewarding financially.

Kerr's Pinks, although initially introduced by J Henry of Cornhill, Banffshire in 1907, was adopted by the Irish very quickly. My agricultural experts informed me that when supermarkets started to introduce bags of 'white potatoes' a few years ago, the demise of the Kerr's Pink being available to all was inevitable. The unnamed 'whites' were half the price.

The Epicure is commonly know as Ayrshires and here in the east they've been regarded as 'gourmet' potatoes as long as I remember, but I'm assured they too should be available from any reputable greengrocer. Today I asked my local farm shop if he would have Ayrshires available and the response was, "Of course."

One variety which was mentioned repeatedly during conversations was Rooster and how it had been introduced in supermarkets because it was a good 'all round' potato. The marketing of the Rooster brand was clever. It was introduced at £1 a bag and I sensed my local farmers hold a sneaking respect for Bartlett's, because the introductory price was held for well over a year - just enough time for people to buy them 'automatically'. I have to admit to consuming them far more than other varieties in the past couple of years because they are good all rounders but since the price doubled - to £2 - I use them less frequently and buy Golden Wonder for baking from my greengrocer.

All the potato merchants suggested if I had a wee piece of ground I should consider growing my own as seed potatoes in the above varieties are readily available from internet sites.

I trust some questions have been answered now. All I need to do is find out about lunar gardening - highly recommended by one man known for growing wonderful potatoes. He said "Ye cannae beat it" and that's good enough for me!
Tweet
Posted by subrosa at 09:18

To the incoming Sassenach –
Firstly, a very warm welcome to wonderful Scotland; obviously an individual of discerning tastes as you rightly hold the GW in high esteem.

If you find a farmer that grows the more traditional varieties, or a retailer that sells them, then they are to be treasured. Tell your family about them, your friends and neighbours, tell the world about them for they are indeed being suffocated by the ubiquitous supermarkets.

But if you have any garden or ground, no mater how small, grow your own tatties.
That first boiling of your very own early tatties with a generous knob of butter atop – Mmmm – heavenly.

Plus all the usual seedsmen will have varieties available in their on-line catalogues.

For loads of information on tatties and all their different varieties visit -
The Potato Council
http://www.lovepotatoes.co.uk/

The Scottish Crop Research Institute as was called and is now known as the James Hutton Institute (Dundee) have people who develop potatoes.

They can breed potatoes to meet particular requirements like for chips or for mashing etc. They breed them using selection.

The supermarkets have a lot to answer for although they have made life easier to a degree.

Whilst I can think of a couple of traditional green grocers nearby they don't have much of a range. Mores the pity.

As a tattie-lover, this post strikes a chord with me, SR.
Here in Edinburgh, the supermarket offerings are dominated by Maris Piper/Peer which I don't particularly care for.
AS JRB commented above, if you have any ground at all: grow your own. I tried this for the first time last November and had a delicious small crop before Christmas. I have now ordered some Shetland Black tubers, because that variety have a taste I like. But I am warned that children need to be blindfolded before they will eat them, because thay look so unappetising.

Thank you JRB. I'm sure he'll appreciate your comments.

I used to do voluntary picking at Invergowrie tedioustandrums.

Can understand about greengrocers not stocking too many varieties though as I'm sure you can too.

What, no mention of the worlds two most famous brands of potato - McDonalds & McCains?