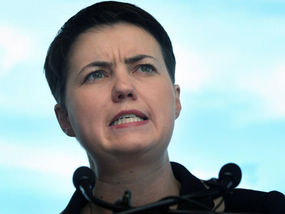 Thanks to Scottish tories' London masters latest scandal courtesy of Peter Cruddas, the Scottish tories' get together on Friday and Saturday at sunny Troon, may well slip off the keyboards of the Sundays. To show a little charity, I thought the following may compensate a little for their lack of publicity.

The leader of the Scottish Conservative and Unionist Party (SCUP), gave her first conference speech yesterday. Why does the woman insist on looking - and sounding- so aggressive?  Years ago women were regularly labelled aggressive when, to my mind, they were assertive, but Ms Davidson certainly displays an unpleasant combative style, which is unbecoming.

Back to her speech and a few of my observations. She's intent upon ridding the Scottish party of 'deadwood' in order to introduce new talent. Bye bye Annabel Goldie and a host of other senior MSPs.

Also she's not happy with the manner in which SCUPpered's list MSPs are chosen so there will be even less input from its grassroots members and more control from the top.

As for the teenager who suggests a Scottish cancer drugs fund, joining Cancer Research UK won't achieve it. Money raised for that charity goes directly to it's England HQ and only a tiny proportion is returned to Scotland. There is a cancer drugs fund operational in England but is one necessary in Scotland?  It seems odd to me that England's fund includes drugs which would normally be available through existing PCT processes: the indication will be one that has either not been appraised by NICE or has not been recommended following appraisal (6.5).

Cancer is a hellish disease and if a sufferer has evidence that a specific medicine may be appropriate for them, then we should ensure speedy consideration and evaluation be given to the patient's suggestion.  Does that require a fund?

Sadly Ms Davidson was forced to rely upon party heid bummers from south of the border to prop herself up and yes "we know we get more from sticking together than we would from splitting apart" was in it too.  The Unionists never fail to deliver.

Last, but by no means least, Ms Davidson wants a new logo for SCUP. Having wracked my artistic brain for many hours - ok, I confess it was a quick Google - dare I suggest this one:

Cruddas was offering dinner with Mr D Cameron for a cool quarter of a mill.

I wonder how much dinner with Ms R Davidson would be – or would she be so surprised that anyone actually wanted to dine with her that she would be happy to go ‘dutch’?

We've had a bit of a blood bath here in Queensland; the previous Labor Government has been wiped out, and left with just five seats in the new Parliament.

It follows the trend of previous state elections - where the Labor governments have been decimated; Qld was more ferocious. 76 seats to the conservative LNP, 2 Independent, 2 KAP and 5 seats all that remains of a government that had a solid majority.

I don't care what political flavour they are, no government can afford to rest on their laurels, the people are revolting (and some are more revolting than others)

You forgot to add for that you could get to dine in Cameron's flat. For 100,000 it would just be any old dinner.

I should think she may have to pay anyone to attend rather than vice versa.

Ah Michelle, I was thinking of you last night when I received a link. Don't have your email so here it is:

Here's another one for you Michele:

By donating to Cancer Research UK, Scottish people get this in Dundee:

and this in Glasgow:

Ah cash for the consideration of Westmidden obligations. But that was merely a single instance of an unintentional mistake.A mere minor oversight in wrong doing not certainly not worthy of calling in PC plod or of having the inquiry. Not at all. Did anyone watch the politics show today? When the right honorable whatever Teresa May expanded on why separation from Westmidden is a very, very bad idea. Worth a watch but I would suggest you keep a sick bucket handy. Amongst the subjects vomit inducing Teresa May gushed forth on was immigration after "separation".....just watch it. Could this be the same Teresa May who last year relaxed passport controls to the extent of stupid incompetence? Endangering each and every one of us residing within UK borders? Shurely shum mistake.

wisname....May failed to point out that the terrorists attack on Glasgow Airport was organised from England and was in protest at the UK and USA invasion of Iraq. A real benefit of the union! Such sick irony. We get our young people to die in their illegal wars, and our country become more dangerous as a result. And all this despite Trident just sitting just down the river, it prevented nothing, not here or in the US.

Thanks for the links Brian. I didn't realise the Ninewells section had already opened although I knew it was underway.

Hadn't heard of the Glasgow one though.

Nice to see some money coming back north. It's taken many years.

I did watch it wisnaeme and found her offensive to say the least. What silly nonsense and she can talk - she can't control the present UK borders.