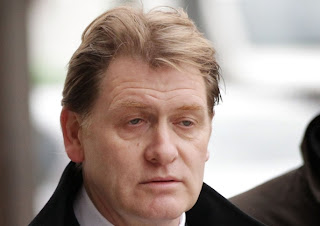 "Clearly it's a matter of considerable personal shame," said the Falkirk MP outside the court after the chief magistrate fined him £3,000 and ordered him to pay £1.400 to his victims after he entered guilty pleas.  He was also given a 12 month community order - banning him from entering pubs and licenced premises for three months - and imposed with a curfew from Friday to Sunday.

The Labour MP has been suspended from the Labour party and the process has started for his expulsion from the party.

Where does this leave his constituents now that Eric Joyce has declared he will stand down in 2015. That's over 3 years he will be able to claim a salary and expenses for a job he's no longer fit to do.

If he had been still in the army his case would have be held before a court-martial; he would have served any sentence then been dishonorably discharged. Civilian courts are much kinder. The magistrate banned him from licenced premises for three months. That will make no difference to his alcohol problems because alcoholics find ways of acquiring drink. Alcoholics, like most addicts, are devious and will use anyone willing to show any sympathy in the hope they will feed their addiction.

According to Sky news last night, few of his constituents think he is or was any good as an MP, yet they voted for him.

Eric Joyce, in his military career, accused the army of being racist, sexist and snobbish.  He was suspended on full pay but the then Labour government was accused of 'protecting' him and allowing him onto a shortlist of approved Labour candidates for the Scottish Parliament in 1999. The army took no further action, although senior officers described Joyce as 'unemployable', having lost the trust of his fellow officers.

Surely such a comment from the army should have warned the Labour party about his character, but no. Any left-winger was welcome regardless of their past it seemed.

If Eric Joyce insists upon holding his post - although he's not fit to do the job - his decision can only work in the YES camp's favour. As it is, without immediately resigning, he shows the lack of respect he holds for his constituents. Hopefully this time they'll show him - and Labour - how they feel through the ballot box.

The House of Commons ought to update its legislation for MPs and  bring it into line with society but that's another issue.

I've put a wee poll in the right hand column if you'd like vote.
Tweet
Posted by subrosa at 09:14

Do you think constituencies should have the right of recall? Perhaps along with automatic expulsion if an MP loses a criminal case?

Don't you find it odd that such a person would fail a CRB check and thus be unable to work anywhere near children (not just alone as a teacher, he wouldn't be allowed in to fix the lights or paint a wall), yet he is deemed fit to help run the country?

It's a bit confusing. He says he thinks it's right that he should go in 2015 because of the conviction. So I'm not sure why he thinks it's not right to go now. Especially since East Kilbride wanted a Labour MP.

He'll cost us another £2.5m if my back of a plain packaged cigarette packet calculations are correct..

One of his 'victims' has used the incident as an indication of the 'pressures' experienced by MPs, with an added whinge as to the lack of concern and measures adopted by the Westminster establishment to address them?

Perhaps another indication of our MPs putting self above the requirements of their constituents for competence through due diligence, fit for purpose and commitment.

Woodsy42, that's a good point. Should prospective and serving MP's have to get a CRB?
If this had been committed in any other employment,he would have been sacked for gross misconduct, straight out the door !Without massive handouts. Time they realised they are there to do a job of work, it is not a gentlemen's club,regardless of what they would like to think of themselves.

I wonder if this "gentleman" displayed a lack of moral fibre and discipline whilst serving in HM's forces? One thing is for sure; he's certainly now on public display for a severe lack of moral integrity and self disipline.....all done in his pursuit of "considerations" that benefit one Eric Joyce, naturally. .....and yet again I strongly disagree with Labour Party decision making. They have withdrawn the whip from him. Lashed and thrown out in the street to fend for himself was what I would have had in mind. Disgrace and self service doesn't appear to be detrimental to holding or retaining public office these days. If certain Westmidden MP's are incapable of reform or of being "thrown out" then what hope is there of Westmidden being reformed from within? If Joyce had been an employee of a commercial concern and this latest example of his obnoxious behaviour had taken place within an employer's premises; he would have been immediately suspended and removed from those premises pending an investigation ....and if proven, dismissed in disgrace. Once again "privilege" appears to over rule reason and ethics in the dark and sordid recesses of Westmidden's self serving corridors of power.

Yes I do douglas and they were a couple of points I was going to make in a post I'll do for sometime next week. But now that you've made them is their need?

Very odd Woodsy and appalling too.

RM, I can always rely on you to make the finer points. Was very tired when I wrote the above and I appreciate you doing that research for me.

I read that somewhere too Crinkly and couldn't believe the gall of the man.

Time they spent a week in Helmand to see what a week's work feels like and with a fraction of the pay too.

It is a good point Apogee.

I believe he wasn't well liked by his colleagues wisnaeme because of his continual radical left wing view which he voiced as often as possible.

He finished his career in the Education Corp. Usually somewhere for 'end of the line' soldiers.

Excellent points. I think it's long past time Westminster updated their club to the real world.

RM I didn't realise he'd left then rejoined but I knew he'd been given Education when commissioned. That was possibly because he was studying.

Perhaps Mr Joyce could become the Honourable Member for HM Prison Service if prisoners are given the vote - the size of the prison population is about the same as proposed new constituencies.

"Joyce joined the Army in 1978, initially as a private in the Black Watch before taking a sabbatical between 1981 and 1987 to attend technical college and university where he gained a BA (Hons) in religious studies from University of Stirling. As a university candidate Joyce was made a probationary second lieutenant on 25 August 1987.[1] In 1987 he attended the Royal Military Academy Sandhurst before being commissioned into the Royal Army Educational Corps (later Adjutant General's Corps) "

Could Mr Joyce not continue his campaign against corruption in the Congo as an independent MP ?
Or maybe he's being humiliated as a warning ?

Should have said. This part was 'tongue in cheek' :)

The new legislation on internet musings doesn't seem to have much wiggle room for satire.

I was interested in his being banned from pubs, and put under curfew at the weekends...

I'be be surprised if an English magistrate has the power or authority to ban him from pubs in Scotland, which is a separate jurisdiction, or indeed to put him under curfew in that country.

In theory (although not always in practice) an MP would spend his weekends in his constituency. As his constituency is in Scotland, I'd wonder that the curfew or pub ban will work.

Incidentally, the same magistrate will have no authority over bars in the Houses of Parliament, which, as a Royal Palace, is outside ordinary law. I think the Speaker or Serjeant at Arms would have to do that.

I imagine SR that the magistrate meant not to stop him drinking, but to stop him being in a public place drinking and likely to lash out at anyone and everyone. He can drink to his heart's content outside licenced premises in England.

There was nothing in the MSM about that Aangirfan. Very interesting. Pity he's lost any credibility now and can't continue highlighting it.

Yes I read that somewhere Brian. Have yet to get the confirmed changes though I think.

Ah that's it RM, he was studying. Thanks for reminding me it was Wiki. :)

No it doesn't RM. Not to worry, they wouldn't come after you. It would be me surely?

There's no way they could control that Tris unless he had a 24x7 minder surely.