Megrahi - What Have The Scottish Government To Fear? 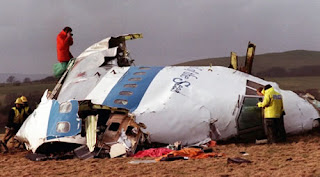 Along with others, I can't understand the Scottish Government's insistence that the Megrahi conviction was sound. Nor can I understand why the Scottish Government's need for primary legislation to finally allow the publication of the Scottish Criminal Cases Review Commission's report on the Megrahi case when, according to Robert Forrester, the secretary for Justice for Megrahi, says that all that is required is 'to utilise the simple, relatively cheap, quick and effective expedient of an amending statutory instrument to remove the consent requirement in the 2009 statutory instrument'. source

The publication of semi-autobiographical book Megrahi: You Are My Jury, by author John Ashton, has returned the issue to the front pages once again.

Dr Jim Swire has, once more, felt compelled to plead his case against Megrahi's conviction and this week eloquently explained the evidence not provided to the defence before or even during the trial. Mr Forrester claims that the new legislation is so circumscribed by caveats and provisos that it will simply maintain the status quo whereby, under certain circumstances, providers of evidence to the SCCRC will still be in a position to block the publication of the document whilst it contains information which such persons have supplied to the SCCRC.

Kenneth Roy has broken the habit of a lifetime and joined something - the Justice for Megrahi Committee.  I'm not suggesting for one minute that Kenneth Roy's involvement will accelerate the Committee's progress, but it is another highly respected Scottish voice and the more the merrier.

What have the Scottish Government to fear about the SCCRC report? We now know that, although Megrahi withdrew his appeal, it would be possible for a posthumous one to be sought.

Arguments over the power to hold an inquiry should be resolved in the public interest, but despite the Scottish Government's assertion that it would be willing to co-operate in a joint inquiry, the suspicion lingers that there is little enthusiasm for a process that could cast the Scottish judicial system in a poor light.  That may be so but it doesn't serve the interests of justice, the victims' families or the population of Scotland.

As I opined over a year ago, if the SNP plucked up some courage and forced the UK government to open an inquiry, it would be a very worthy and long-remembered legacy.
Tweet
Posted by subrosa at 09:15

Spot on SR. Get things out in the open. The Scottish Government could unlock everything and demonstrate how an independent Scottish government would behave.

If the verdict was wrong this should be acknowledged. Embarrassing? Better that than lacking honesty.

The Scottish Govt seem to be the only folk in the world who think that Megrahi was guilty. But they have to stick to this line I suppose. If the Justice Secretary veered from this view then he would have to order an inquiry and get to the truth and that would open an even bigger can of worms and no one wants that. Especially the people who are hammering away in fake disgust at the SNP over the Megrahi release.

I don't think its possible for any government to so undermine the legal system that it informs by claiming the innocence of a person currently found guilty.

They can do it till their blue in the face after a successful appeal though.

That said, if ever a boil needed to be lanced this is it. The SNP should open up the books (so to speak) and clear the air.

It seems possible that there are still people in place who may have something to lose.

For what its worth, I don't believe he did it and other than a desire by the SG to protect the Scottish Legal system (which I think is horribly flawed at times) they should come clean.

While I don't hold the SNP responsible for the whole camp zeist pantomime, I'd hate to think the SNP in an effort to save Scottish face are delaying and obfuscating, it would be hugely disappointing and damaging to boot.

I don't know what's holding them back TT, particularly as they had nothing to do with government at the time.

No one wants it RM? I can think of many who do, but I'm sure you mean politicians.

Good points pa_broon and I agree.

The opposition of course can't use this as they were involved, so there's little or no pressure on the current SG to do anything.

I swither all over the place on this one.

Not that I have any doubt as to Megrahi's innocence and the inherent flaws in the injustice served on him in both sentence and appeals, but in the subsequent willingness of the SNP government to play the covert 'establishment' game.

In that respect they're far too 'clubby'in my opinion and excuses of matters reserved and data protected are a clarion of obfuscation.

Injustice only serves one purpose and that's corruption.

Megrahi - What Have The Scottish Government To Fear?

Err! The Truth Obviously the snp will not come out smelling of roses.
Otherwise they would be the first to ask for a inquiry.....In the soaraway 'SUN' of course...

The turning point for me was the SNP Westminster MPs vote for the 'no-fly zone' over Libya.

This led to the destruction of Libya and the establishment of al Qaeda in power in Tripoli.

The SNP now has blood on its hands.

There is a suspicion that an independent Scotland would be like Kosovo - a Mafia state.

Why is Rupert Murdoch supporting the SNP?

Alex Salmond's party has been infiltrated.

"The Scottish Govt seem to be the only folk in the world who think that Megrahi was guilty. But they have to stick to this line I suppose"--------------Really ,have you have you followed the opinion s of the British govt ?

Nikostratos------All done uder the watch of the labour and tory unionists ,never mind why bother with the truth labour never does .

It is the same with regard to the Hollie Greig case why are the SNP not doing anything about that either.

I think that there is blackmail going on with regard to both of these matters to stop the SNP doing what should be done which is to do with the real reason Alex Salmond resigned the firt time as leader - most likely scenario!

Lockerbie bombing - http://www.facebook.com/megrahiyouaremyjury/posts/354459274573500 ... Google "the selective use of polygraphs"

Every time an attempt is made to get a coherent story out of this mess,the tracks start to head back to the States. Why was the Maltese shopkeeper paid a lot of money, or any money to testify? A lot of experts say the bomb most likely was loaded in Heathrow. Then a report that some American "spooks" who were reported to be on the flight were going back to the States to blow the whistle on "black ops" drug running by other "spooks". Evidence was seemingly held back ,by the US say some reports.And there are many more reports around that indicate that something other than middle east revenge was going on. Libya probably held their hand up for economic reasons, as an oil nation it was probably a cheap option to get rid of sanctions.They were already blamed for the deed so what was there to lose?I think this has to do with loss of face in other countries than Britain,faces very high up the totem pole, we are not looking in the right places, do we really know what this was all about?

I'd have thought that the SNP's hesitancy on this subject would have been because of some misplaced sense of loyalty to Scottish law - the same misplaced sense that saw them defend it from the UK Supreme Court. Remember three Scottish Judges sat in judgement and dismissed the defence single handedly. Of course we now know that there was a tranche of evidence not shared with the defence team - the break in at Heathrow on the moring of the bombing for example - an early forebarer of the Cader case anyone?

Apogee - I did a couple of posts about this some time ago. There will be other posts online but here are my posts -

Hi Allan,thanks for the links, reminded me of a few things I had forgotten.
How much else was going on that night? How much do you think the various governments trust their spooks? And the Americans reputedly have form for government owned black ops.That could be part of an explanation. And there was a report heard which was US mil choppers were in the area within 40 minutes after the crash.Have no idea where from but not a bad effort for a scramble from a cold start if that was the case.Never heard any thing more to verify it ,one way or the other,they could have just been passing through, and got called in.
If we find out what really was happening I will be surprised, but until then we will not know why the various governments are sticking to the official line.

Crinkly, I wonder, if the SNP were still in opposition, if they would be calling for an inquiry.

And I think Labour would come out smelling of sewerage Niko.

That vote concerned me too Aangirfan and Murdoch's love-in does too.

Yes footdee, the UK government is of similar mind.

There are all sorts of rumours as to why he resigned Billy but that's the first time I've heard that one.

Thank you for the link David. Refreshed my memory.

It does Apogee and too often we hear the US is refusing access to evidence.

More and more the US is dictating to us and we do nothing.

Thanks for the links, they too refreshed my memory.

I know exactly how he resigned Subrosa and so does Lothian & Borders police and the Crown Prosecution service and it was nothing to do with either of these cases. They did nothing about it and it would have also brought down a lot of other people from the SNP but they are probably using the information to blackmail the SNP from doing what they should be doing with regard to justice for the people in these cases.

In the SNP they protect you if you are a crook, perjurer etc but they throw you out if you call these same people scum for being crooks etc. Trust me I've been there and that is why they have hardy any members left in Renfrewshire these days.

With regard to Lockerbie as I have posted before I do not think that this was to do with terrorists of any kind. I believe that the flight was illegally carrying munitions that were unstable and that these went off and caused this atrocity. The fact that an ex-Detective Sargeant friend of mine who was there confims that there were millions of needles all over the place and that the bodies were shreddded into hamburger sized chunks. He also confirms that the had to put down tarpaulin to get to the bodies. Both the UK and US governments would have fallen if that had got out plus they would have had to pay out billions in compensation as well so having a handy scapegoat with regard to blaming Libya saved a few necks and cash.

I heard he had back problems Billy.

As for politicial parties - if you don't toe the line to the letter they don't want you. No free thinking allowed.

Will we ever know the real truth though Billy?