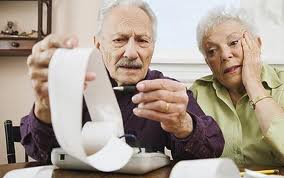 Planning for retirement can be a nightmare and many opt for the first option offered because they believe financial 'experts' should know the most suitable products available.

Like many women in my age group, I gave little thought to the day when I reached the official age for retirement from full-time work and concerned myself with supporting my family. What little spare cash I had available was consumed by childcare costs, so I was older when I finally realised a private pension, no matter how small, was a sensible idea. I was wrong. Gordon Brown robbed me of my 'rainy-day' pension and it hardly pays for a hair cut once every six weeks.

There are 1.8 million people in later life living in poverty. Michelle Mitchell, charity director general of Age UK says: "Claiming pension credit can make a huge difference to someone's income and quality of life. The government needs to start an awareness programme and move more towards a system where the DWP pays entitlements rather than an individual having to work their way through the benefits maze."

An awareness programme wouldn't encourage today's pensioners to claim what many see as 'charity' and should they be persuaded to make a claim, thousands give up when faced with the paperwork involved because they consider the means test system an invasion of privacy.

A good friend of mine tried the process a few years ago. Firstly she completed the DWP's online pension credit assessment which said she may be entitled to some help, so duly encouraged she sent for the paperwork and returned it completed. After four months she telephone to ask why she hadn't had any response only to be told she wasn't entitled to anything because her income was £1.12p a week over the qualifying amount. When she asked if she could receive the adjudication and reasons in writing she was told, in a less than pleasant manner, that 'it didn't work like that' and she could re-apply in 12 months.  She hasn't. The thought of going through the process again is too daunting. Instead she sold her car and used the profit to help with every day bills.

Last autumn she was dreading the onset of winter and the prospect of ever-higher utility bills, but fortunately the winter here this year has been unusually mild, so she will manage to keep her head above water.

Heating bills are a pensioner's greatest worry and nobody should have to go without warmth in a country which professes to be caring.

I've no suggestions as to how government can make benefit entitlements less humiliating, but there is a new website which I'm told is 'user friendly', so if you know of anyone who may qualify for financial help point them towards it. Even better, if it's at all possible, give them help if necessary and don't forget - this website is not a replacement for the official paperwork. They may well need help with that too.

It's reported billions of pounds of benefits go unclaimed each year, according to figures from the DWP. Pensioners are one of the largest groups failing to claim. If the DWP knows that surely they must know who is entitled to them or are the figures purely guess work?

Yes, "Prudent Gordon's" raid on private pension funds was a very clever tax. It never appeared on anybody's payslip and the full effects were only felt years later. Combined with deliberately induced inflation from "quantitative easing" and derisory interest rates on savings, we have a system which is pillaging the thrifty and provident for the benefit of the feckless and reckless.

The most feckless and reckless of the lot, of course, was HMG in the New Labour era but this government is doing very little better. The cuts, so far, are merely tinkering round the edges.

If the main vanity projects were scrapped - "climate change" measures (which won't work, even if the theory is right), foreign "aid" (a transfer of money from relatively poor taxpayers in Britain to very rich practitioners of corruption in poor countries) and the cost of funding the EU and observing its regulations on 100% of our economy for the sake of the 8% of GDP we export there, that would be a good beginning which would affect very few - except the official parasite class and the rent-seekers with whom they have a symbiotic relationship.

Then there is the problem of annuity rates, which have dropped sharply. The allowable rate for "draw down" income from private pension funds is based on the interest on government stocks, which is at an all-time low.

I reckon that my original occupational pension is about half what I could reasonably have expected when I bought it. (at that time I reckoned about half what the insurance companies told me when I bought it). After three years of pension, I received a notice from the Government Actuary's Department that it must be reduced by 40% - because of the low interest available on government stock.

So I cannot help feeling a little envious of those lavish public sector schemes which will still be hugely generous by comparison with anything available in the private sector, even with the proposed cuts. For practical purposes you simply cannot buy inflation proofing in the private sector .

Gordon's was a deliberate plundering of
the productive economy to favour his payroll vote in the public sector.

I have no frame of reference for pensions, I have one but I have no idea how it works and only a wooly understanding of what it will be worth at the end of my working life, should I stumble along for long enough.

My dad's income is about £14Kpa, he doesn't qualify for Pension credits, turns out he's still one of the lucky ones, even on a measly £14k.

What I have noticed is his utility bills are fast catching up with his income, if it continues he'll be in deficit with 18 months.

So much perniciousness about these days, politicians need to get their priorities right for a change.

pa_broon74, the politicians HAVE got their policies right, for them. They are laughing at us all the way to the bank,and we are paying for those illegitimates as well.

Pa broon - here's a simple indication of what you can expect from your pension pot.

Pre meltdown - early 2007. for every £100k in your pension you could expect an annuity around £7k per year.

In the 1980s I was told by a then director of RBS "every financial product offered to the public was a scam." I heard him, but didn't quite believe it - like many at the time the main attraction for me was the pension contribution could be used to cut tax liability.

So I stayed in SERPS and contributed to the coffers of Equitable Life! Then when that went pear shaped I dragged out what I could and put that at the tender mercies of Rothchild's Asset Management. Four years later they decided to get out of asset management and again got out less than I had put in once management fees were deducted.

I then moved the funds to Standard Life and watched the same process being re-enacted.

Candidly I would have done better to invest in fine wines and draw down from stock annually. As it is now I would have to live to 104 to balance the pension I draw with the amount invested and that's without taking interest earned into the equation.

One piece of advice: if you have savings, don't borrow.
When I retired, an Indepndent Financial Advisor pointed me to a Savings Account which offered a much better rate of interest than my own bank.
He failed to point out that it would be better to pay off the residue of my mortgage, which was charging much more than the best savings rate.
The insidious thing is that you may not even realise you are borrowing.
A relative of mine recently asked me to look into her house insurance which she felt was a bit steep. I found that she had automatically been put onto monthly payments.
From the insurance company's point of view, the whole annual amount was due in advance, so she was unwittingly in a credit agreement, at an eye-watering rate of 29% per annum.
Another insidious trait is banks not telling you when they reduce interest rates on your savings.
The Heid-yin at an HBOS branch had the good grace to blush when she acknowledged that the interest rate on my cash ISA with them had gone down to 0.01%
My fault for taking my eye off the ball I suppose.

Beginning to think that the old French farmers idea of buying gold, sewing it into the mattress, and keeping the shotgun loaded, may be a good idea.

I too feel a little envious of the public sector schemes Edward, when I received much less than I paid in over the years. Having to move my pension twice cost extra fees and the amount now hardly pays my heating bill.

Your Dad should reapply every 6 months for pension credit pa_broon. I know the paperwork is a nightmare but perhaps you could help with it?

We are Apogee and not just once.

Ah Crinkly than you for explaining to pa_broon. I see you've had similar problems to myself, only more of them.

The politicians are all at it Joe and I can't understand why we continue to keep quiet.

Maybe it's my generation. I'd like to think future generations would create problems if it happened to them.

All I've ever borrowed was the money for a mortgage Hamish. My father was dead against borrowing and insisted we save THEN spend.

However, my endowment mortgage let me down too - by £thousands.

I knew a woman who had a false bottom in her cat's litter tray where she kept her rather extensive range of costly jewelry Apogee. When she died her family were astounded to be told where the bulk of their inheritance lay.

Hi SR, could you call that hiding it in plain view? Very clever bit of misdirection.

Exactly Apogee. Mind you, in today's world thieves would possibly make off with the litter tray as well. :)