Every Dundonian Home Should Have One 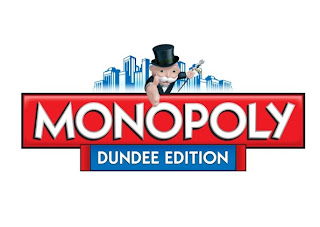 Dundee has won a nationwide contest to become the latest place in Scotland to be celebrated in a special edition of one of the world's most popular family boar games.

It is to get its own official Monopoly board after beating ten other Scottish cities and towns, including Stirling, Perth and St Andrews.

The company which manufacture the game will be consulting Dundonians as to which city property landmarks should be selected to swap places with the famous London sights and sites.

Deep in a cupboard lies the Monopoly board of my childhood and it hasn't seen the light of day for many years. I remember as a child playing Monopoly on alternate Sunday evenings. The other family game we played was Canasta, but I preferred Monopoly because I found it difficult to comprehend card games.  I still do even though, at times, I can play a decent game of bridge these days.

My choices of landmarks would be the soon to be built Victoria and Albert museum, along with the Discovery and the Caird Hall, but it will be interesting to see the end result. Must write an early letter to Santa.

The McManus Gallery should be in there as well. I can't wait to be building hotels on Blackness Road! 'Go to Jail' = the Sheriff Court?

The Hilltown multis! The only place where THEY pay YOU to buy a house.

All the bank branches and city hall;or are they already mortgaged?

I once heard a Big Issue seller chanting, " ers a Big Issue, free time share in Lochee this week only."

Lochee is famous for that other Scottish delicacy The Lochee Steak, which I now know is a pie, or a "peh" as it is cried in Lochee.

There used to be a wee pub near Dens park that had a Lochee Steak and chips on the bar menu. It was so long ago that age has stolen the name from me.

kbw.. we used to always call Lochee the Chinese quarter ( Lo Chee)
Most famous for Gorgeous George Galloway of course.

They will struggle to find 'free parking'.
The players pieces will be good. A peh, a wee lassie pushing a pram, a desperate dan and a big issue seller with a dog.
Mayfair will be Strathearn Rd etc.
Too many choices for old Kent Rd etc

Rosie,
I won't comment on placenames but may I suggest that the markers are replaced by a jar of marmalade, a folded Sunday Post or Oor Wullie sitting on his bucket, a potato sack and a Dundee cake.

I think an email to the manufacturers is due Richard. :)

Aye they were some buildings Tris. Horrific really.

Good ones Crinkly.I think the Borough Council offices will be free of a mortgage though.

KBW, I have vague memories of that pub too as I was brought up in Dens Road, just yards from Dens Park.

Will see if my old school pal, who lived in the Provie, remembers the name.

Oor Willie has to be in there somewhere RM.

Ah Brian, you beat me to it.

The Hilltown I would say definitely Aangirfan as it was a village itself.

Adelaide Terrace too. Must show the world where working hard gets you. :)

That's a difficult one footdee as Forth Ports are involved. And we know where its allegiance lies.