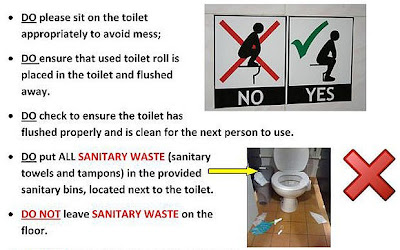 This week almost two-thirds of England's primary school staff said they have seen an increase in children having 'accidents' during the school day. The Association of Teachers and Lecturers, which conducted the poll, said the increase in pupils without toilet training is putting extra pressure on school staff.

The figure rose to 71% among teachers working with three to five year olds. Should a three year old be fully toilet trained? Of course not because all children develop the skill at their own pace and the parents can only encourage not insist. Children so young being in a formal educational environment is a problem for me, but that's another post.

I would expect 98% of children to be toilet trained before the attend primary school (there are children who cannot be expected to attain full control) but it seems the SEN Disability Act 2011 and the Equalities Act 2010 have led schools to believe that they can't insist that children are toilet trained prior to enrolment. This is a good example of over-legislation. Do we need laws to ensure that small children who have disabilities which affect their ability to control their bladders are allowed to enter the primary education system?  It's not so long ago common sense ruled in such matters and discussed between the school head and the parents resolved any problems.

But now, not only do schools have problems with young children and toilet training, Swansea University has had to put up the above sign to instruct students how to use the toilets properly.

They have blamed it on 'cultural differences' in the way that their foreign students use the toilets and say that since the posters were displayed 'the situation has greatly improved in the affected areas.'

Not everyone is thrilled with the posters however. Stephanie Preedy - a law student - said: "We all need good A-levels to get into university, yet they don't think we know how to use a toilet?  It's ridiculous and quite belittling."

Such a shame Ms Preedy didn't study the humanities before she decided to undertake a law degree.  Even if she had travelled to any degree she would realise few countries share the UK's toilet design. If she'd travelled to the non-tourist areas of nearby Italy, Spain or France, she would understand the cultural differences.

As to young children, who have no problems, not being toilet trained before attending school, that is an issue which schools must address. It's up to schools to insist that children are toilet trained before starting and also it's up to teachers to explain to wee ones what to do when they want to use the toilet. It was never an issue in my day and it was only later in my primary years did I discover one of our class had problems.  All credit to his teachers, none of us knew for years.
Tweet
Posted by subrosa at 10:38

I'm on Ms Preedy's side. I would expect anyone coming to live here for three years would have enough sense to learn a bit about this country beforehand.

You're right SR. The complaints from our students just highlights how ignorant they are.
The signage isn't targetted at them.
Stepping into a toilet in the middle east isn't for the faint hearted lol

Thank you Joe. I didn't expect anyone to get it. ;)

Well I learned a bit about France's holes in the ground before I went there EP, but I was unable to get any practice here. ;)

Having never been there RM I wouldn't know,but some places in Europe are what I'd call 'desiring a little hygiene'.

What is it with Scotswomen and toilet humour? You and Judy Murray (she of the classic Women Peers photo) are keeping the side up :)
I was shocked that the Swansea Uni poster wasn't translated into Welsh, eg Dim Scwattio.
Perhaps the Uni authorities had advance notice of this news item:

Perhaps Dim Swicyd Bom posters will appear all over the Gampws.

Me Grandson (age 6) will not lift the seat(as opposed the lid) when he has a tiddle i have told him time and time again but he hasnt got the message yet.

My wife just says(sardonically) now you know what its like,

The first time my wife used and paid to use a traditional Turkish toilet (the round hole in the ground) she nearly died I am not going in thats she says,
she had to wait till we got back from our trip to go in the hotel.

She was not amused.

No need to go across the channel to practice bomb-aiming skills.

A Rochdale shopping precinct has installed some squatters:-

I clean them here Brian so that's my licence for humour. :)

I sympathise with your wife on both counts Niko.

Moi aussi. Children of three should be at home with their mothers.

"Common sense used to rule in this..."

Commone sense no longer rules in anything, SR. Everything has to be subject to a protocol, a procedure, a document, an inflexible rule, and everyone has to be trained, certificated, validated, approved.

But it's where we are. And it's why we now have SEVEN MILLION state employees.

Sadly you're right WY. It's been a form of mission creep and we've been deceived - partly our own fault for not reading the 'small print' I suppose.