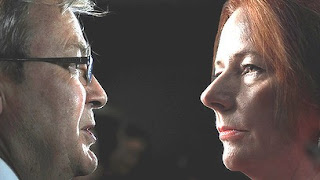 There's an election going on in Australia - the Labor leadership election.

The Labor party are sliding badly in the polls and some say it's the fault of Julia Gillard the current PM. It seems she's not popular with the electorate although she claims she has the support of most of her MPs.

Kevin Rudd resigned from his position of Foreign Secretary last week then decided to stand against Ms Gillard.

If you would like to watch the ballot results you can do so on this updating site.

No matter how much the candidates call for unity after the ballot, it won't happen because it won't solve the problem - that the party is locked in unstoppable destruction.

Only one can win but neither will be a true victor.

I hear belling ringing in the distance...

Update:  The result was 73 to 29 to retain Gillard as leader of the party and therefore country.
Tweet
Posted by subrosa at 21:02

Her ill-thought-out Carbon Tax will be her downfall.

She was forced to bring in a carbon tax to get enough votes, from the Greens and independents, but labor in Australia has had this instability for decades, almost a death wish, and it very likely will be exactly that at the next Federal elections.

She promised to scrap the carbon tax but then had to renege on her promise because as Apogee says she needed support from the global warming scammers.
She's a bit like our Limp Dems. Would sell her granny to get votes and a sniff of the limo leather seats.

But what is the alternative?

It seems to me to be the case that Australian politicians haven't the foggiest idea what they are doing. They sway in this direction or that. In any particular situation, they are too stupid NOT TO go against the advice of 'special interest groups'. That is, any individual politician in Australia in incapable of thinking for himself. In fact, it is becoming more and more evident that Australian politicians have become divorced from reality.

The fact is that 'STABILITY' is no longer something that politicians can influence. STABILITY depends upon the activities of multi-national corporations.

The unuterably stupid Australian politicians decided that smoking bans will stop people dying entirely. If everyone stops smoking, nobody will die. That is the inevitable conclusion which is derived from ASH ET AL statements.

ASH ET AL (and their tame politicians) have the microphone. It is extremely odd that Australian politicians allow them to broadcast their poison without contesting it in any way whatsoever. What are sane politicians in Australia afraid of?

The difficulties of any one politician, whether it be Prime Minister or some other, reflects only their inate stupidity.

Can't see them winning next time round right enough Apogee. Too much infighting and the people don't like it.

Aye, I've watched a few of her interviews and she never even relates her replies to the questions.

Must be a Labour trait RM.

That's the impression I get from them Junican. However, I don't see our politicians are that much better.

Oh where do I begin??

Dear Julia, was a true and loyal deputy to Kevin Rudd right up until she knifed him in the back. And I mean 12 hours give or take 30 minutes!!We can have trust in her integrity we were told. We were not convinced.

Rudd's problem was he pursued policies that the unseen men of the caucus did not approve of. His colleagues praised him to the skies and then ousted him.

Australians are in a manner of speaking 'simple' people, that is they have a clear cut attitude to what is considered to be 'Australian' and what is not - knifing your colleague in the back is not approved of.

And then prior to the last election, dear Julia swore that 'there will be no Carbon Tax with MY government' but not everyone believed her, so she had to promised the earth to the Greens to get a majority in parliament, and next thing we know we have a Carbon Tax. We in Australia remember these things.

And her promise to Independent MP Andrew Wilkie that she would outlaw pokies if he supported her - he did, but she decided to get the speaker to stand down and persuade a buffoon from the Liberal party, who like her, has little integrity and no principles. So Mr Wilkie was given the heave-ho, the pokies won't be outlawed and we can continue to rake in all that income from their taxes.

Now if this was the script for a new TV soapie called 'Politics in Ramsey Street' (we do soapies rather well) - you would still not believe it ... but this is just the tip of the iceberg!!!

Do you want to know about the Wayne Swann / Kevin Rudd saga, teenage rivals for the love of the Brisbane Labour Party, Swann so precise and ... coldly aloof and 'our Kev' so warm and friendly and so .... Australian, the little larrikin?? Or shall I keep that for Episode 2?

You couldn't wish for a more entertaining political scene, bet you wish you had something like it in Scotland .... oh hang on, Rupert Murdoch's latest rag endorsed by the SNP leadership sounds like a good scenario for an Australian led coup a la Neighbours!!

Good on ya cobber!!

Wonderful Michele and thanks so much for the entertainment. I have a few readers who follow Australian politics quite closely and I'm sure they'll be delighted to read your comment.

Let's not mention Rupert's 'world exclusive'. It's only 24 hours since the announcement and I'm still smarting. :)

Hi Michele, would have to agree with most of what you say. The politicians from the days of "pig-iron Bob" in the 50's to Gough Whitlam , Jim Cairns,(remember him?) and Malcolm Frazer and Bob Hawke were all much bigger personalities and probably smarter than the current shower. They learnt their trade in a much harder school.You could listen to them ,you might not agree with them, but you could understand what their argument was. The labor caucus has caused immense damage to the labor party, at times one wondered how they came by their power in the party.In comparison the current lot are pigmys.

To save non-Aussies' embarrassment, well mine anyway ;), I wish Michele had explained that pokies were poker gambling machines - it's the sixth definition in the Urban Dictionary.

And it looks as though Angela Merkel has beaten Bob Hawke's record for neckking beer quickly - he skulled two and a half pints in eleven seconds - she managed funf Biere in a second. Great composure, Angchen!

Brian - what were you thinking it meant ..OH!! Oops!! of course, how remiss of me ROFL

Sorry: It's an Australian given to add a little appendage to words; so you will find us lighting up the barbie (Barbecue) around Chrissie (Xmas)- with an eskie [coolie bin NZ] (hermetically sealed and cooled box for ice and cold stuff)full of tinnies (tins of Fosters, or here in QLd- XXXX otherwise known as Four X) or some other coldie!!

It is therefore inevitable that poker machines get given another name, which - for Brian's sake - I will not repeat!!

PS - they're all lovely dovey in Canberra at the moment, with a load of fixed smiles, determined grins and gritted teeth... it's all going to end in tears and Tony Abbot I suspect.

One rumour flying around Brisbane is that 'our Kev' is going to resign his seat thereby destabilising the government and precipitating a 'Vote of No Confidence' Mr Wilkie (see Episode 1) has indicated he will vote against the government which should trigger an election. Great script idea, but let's see how it plays out in real life.

Apogee - You are not wrong, Gough Whitlam would have made mincemeat of them all, Dear old Jim Cairns, would have decimated them with a slight smile on his face ... and may the good lord attend to their remains if Paul Keating had been in Parliament. (He managed his revolt with much more finesse)

Exciting times we live in here in the land down under

Do keep us updated Michele. There are quite a few of us who have more than a passing interest in Australian politics. They seem so much more fun. :)

Shall do Subrosa; It will be a pleasure; making fun of them keeps me from throwing tomatoes!!

AND to make things more interesting there is an election next month for the State Parliament here in Queensland, with another female Labor Premier (no spelling mistake they have taken the U out because U are not important) going to the polls.

Isn't it amazing that in four years they spend 3 years and 11 months increasing taxes 'cos the nation's going broke, but come election time there's 1/4 million for a ladies art centre in a Labor marginal seat out at Kickatinalong; another 1.5 million for a improved rail connection which has (up til now) been shown not to be cost effective.

Now if you were a federation in UK you TOO could have the same fun and games that keeps us amused year in, year out.

All you have to do is practice is the inevitable "G'day Mate" to Rupert and she'll be apples!!!

Watch this space for Episode 3; coming to a computer screen near you soon!

Really look forward to it Michele. You could do a quarterly blog post and immediately create a large following. :)

I do hope you noticed my effort to keep with the lingo but omitting the U myself.

Thank you for your comments Subrosa, and a quarterly blog hmmm - the way things are going down under, I'd have to keep updating it every quarter of an hour!!

Back in office, take a breath and stuff up again - Full story here http://tinyurl.com/77f8yhb

Mr Wilkie and the Pokies (sorry Brian)are showing their head above the parapet - deep breath, take aim .... and .... there will be 'more to follow over'

Keep an eye on the SMH - it's only slightly biased.

PS - this is a great analysis of the problems that the Australian Labor Party face ... hey ho I'm off to bed it's quarter to midnight.

Enjoy the reading ... and good night.

Many thanks Michele for the links. Very much appreciated.

Not sure where else I can put this, but with the resignation of Kev Rudd, it will come as no surprise that Australia now has a new Foreign Minister - his name is Bob Carr; and let me introduce him,

Two minutes in the job and hey presto he's in trouble already.

Read and weep for the idiots we now have in charge::
http://www.smh.com.au/opinion/political-news/carr-backs-away-from-png-sanctions-comments-20120316-1v9o4.html