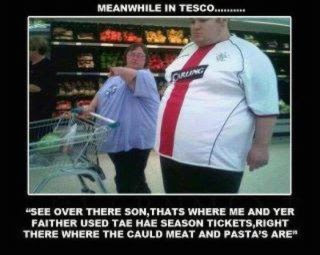 I know a couple of guys drinking severely watered beer because they've been crying so much .In fact I can think of another , but he is a
Celtic supporter.

It really is a sorry tale, certainly no credit to the financial management team, there is a lot to come out here.

Well Apogee, football clubs do sell their grounds to supermarkets. St Johnstone did it some years ago. Different circumstances though.

I see Rangers have started laying off staff.
They had to let 4 refs and 3 linesmen go tonight.

Well the site of our ice rink in Ayr is now Sainsbury's, so good enough for them I say.

You'll have to explain that to me RM. :)

I was told on twitter that I was gloating about Ranger's misfortunes WY.

Why is it these days people seem to have had a humour bypass?

SR. It has long been a standing joke amongst non old firm fans that the refs and linesmen are all bought and paid for by Celtic and Rangers.
Decisions made by officials in their favour hint at this not being a total conspiracy ;)
The latest rumour is that David Murray is planning to sue Craig Whyte because he hasn't been paid his £1 yet.

Obviously that image has been photoshopped.

The two burly individuals are in the fruit and veg aisle and clearly, they're not ones who often sustain themselves with these types if victuals.

(It's often been a source of anxiety for me, if or when I'm watching the news and piece comes on about obesity levels in Scotland; the arse they show flacidly articulating down Leith Walk to demonstrate the point is my own.)

Ah RM, I thought it was an 'in' joke. Being a rugby supporter we don't have such things. :)

Pa_broon, I should think it has been but not by me. I can't do tricks like that.

Time for a pair of support pants?