How Poor Is Greece? 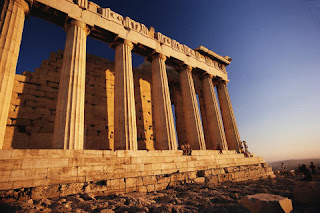 A guest post from John Souter.
How ‘Poor’ is Greece Now & How Poor Will it Be?
Who would have believed the 21st century version of blitz-krieg would be waged by the use of speculation backed by computed digits and Monopoly money?
This is the financial shaman’s version of the neutron bomb – the one that supposedly annihilated all life forms but left the real estate and assets untouched and ripe for the victors spoils. Not a bad result for a threat backed by nothing more than a myth and a lobotomised propaganda machine.
Was this a conspiracy or a cock-up? Is Greece merely a tactical test case to test a greater strategy? Iceland blew up, but it wasn’t part of the EU and didn’t play the game, choosing instead to let their banks go to the wall. And, anyway, Iceland was too small to be treated as a test case. ( Though strangely the money men have already decided Iceland can come back into the funny money club if it wants to – perhaps the club doesn’t want any country to survive and progress out with the clubs ‘largesse’ of debt and interest?)
Ireland and Portugal for the moment have played into the austerity pack of socialising real costs in order to pay real interests for computed Monopoly debts that circled only within the speculators and did nothing for their real productive economies. So for the present, they will be allowed to continue paying the pawn fee while the broker decides whether to sell their pawned assets or keep them in escrow.
Until that is Greece succumbs or is subdued and the tactic is proved successful; then the PIIGS will be transformed to exactly one letter less than the acronym and given the same neutron treatment.
Ireland, Portugal, Spain, Italy are already on the conveyor. The new Baltic and eastern European entrants have little in the way of reserves or financial clout to be able to withstand the ‘new’ club rules. Then on to France and the UK, both of whom, for the moment, are claiming the role of self sufficient internal and external gualeiters while in reality they are in just as much, if not more, hock to the Financial Storm Troopers as the countries they’re victimising.
Some economists argue this isn’t a moral issue, purely an exercise in fiscal control. They might have a point if the money, the debt and usury charged were real and thereby creating real hardship for the alleged investors. But they’re not. It’s electronic Monopoly money that hasn’t even incurred the cost of the paper it isn’t printed on.
If we allow this idiocy to win even a tactical skirmish we may as well write off the last five hundred years, democracy and the advance of civilization; and gird our loins with the sackcloth of feudal serfdom to serve the alchemy of the Overlords of Financial Funny Money.
Whether through ignorance, incompetence or prior recruitment to their cause this is exactly what our political masters and their technocratic gualeiters want. There’s a lot of ‘profit’ in it and it would make their lives so much easier not to have to spin their way through the demands democracy places on them.
For now we still have a choice. Either the easy way of apathy, or we take a myth by its mythical horns, expose it to the ridicule it warrants and deserves, then carve out for ourselves, our communities and our nations a real life based on our real values.
In the real world, the Greeks are our neighbours and the rats in the financial shaman’s laboratory. How long before it’s our turn?
John Souter
20/02/12
Tweet
Posted by subrosa at 09:23

Interesting post, but it ignores the level of corruption and incompetence shown by all levels of the Greek government for many many years.

Even with the bailouts Greece will still have debts of 120 to 140% of GDP by 2020 ( going by the most modest of estimates). I'm not sure what the point of it all is.
The latest legerdemain ( sleight of hand - this Greek tragedy is increasing my word power no end) is the ECB decision to make it's bonds superior to all other bonds and due first re payment.
This will see private bond holders making for the exits ASAP. I'm not sure how this will help matters.
The only outcome will be to print money , give it to Greece, who give it to their creditors ( mostly bailed out zombie banks), who will then be able to repay their debts a little and pay themselves large bonuses for their cleverness. A sort of money merry go round in the eurozone.

Sandy - No doubt there was, and probably still is, plenty incompetence, even corruption within the political 'elites' of Greece?

But how do you measure it? Is or was Greece 5,10 or 20% more incompetent than the governments of Germany, France, the UK or Portugal?

And more importantly, how do we as the people measure the competence of our governance when, generally the myth of democracy begins and ends at the ballot box?

I couldn't give a toss for the politicos. Their record speaks for itself. And, if the Greek - or for that matter any other national politicians - had any claim to competence the explosion of sham money would have been stifled thirty years ago.

Instead they all decided not to look into the gift horses mouth.

Except once it's paid (if ever) and it gets back to source - either a Central Bank or ECB in this scenario - they merely hit the clear button. (meaning, if it was in actual currency notes they would burn them)

Do people have to suffer for this sort of idiocy?

We are already in the lab, but have not yet realised that all those people in white coats will be coming for us soon.

Crinkly..I think he was an 18th Century fly Fifer bankster who died a pauper.
I don't think he got a knighthood ;)

RMG - thank you for the info.

If true he must be fairly unique and I'm surprised he doesn't come up in a Google search.

Poor beggar was obviously born before his time.

Crinkly and RMcG, he invented paper money without intrinsic value, money as a medium of exchange, and fractional reserve banking to get round the problem of inadequate money supply stifling investment in capitalist economies. Banks could create paper money to lend to merchants and industrialists to allow higher rates of growth than would be possible with gold and silver coins. His work was thus simultaneously the root of and solution to our financial problems.
I don't think he'll ever appear on a banknote.

Brian/ Crinkly. I got my summary of John from Wiki..


He was some character right enough. Escaped to Amsterdam after a duel over a Lady etc.

What grand comments. I have a friend in St Andrews by the name of Law. Must ask her if she's ever traced her ancestors. Thank you gentlemen for developing my general knowledge.

IT is very old and interesting.

Thanks for the comments and the education on John Law.

It would seem 'certainty' can make fools of us all.