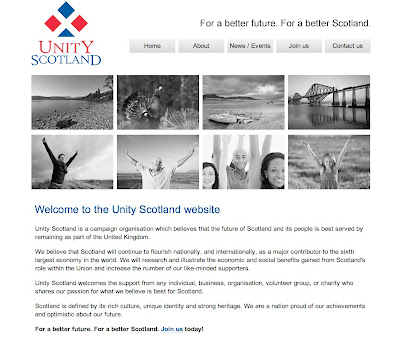 click to enlarge
On Thursday I came across the above website, 'Unity Scotland'. It calls itself 'a campaign organisation which believes that the future of Scotland and its people is best served by remaining as part of the United Kingdom.'
Obviously the site has been published by the pro-union side of the debate and it's good to know someone is making an effort to attract an online audience. However, after digging a little deeper I found the site does not state who is responsible for it, but mentions 'Unity Scotland therefore is not driven by parliamentarians, but by you'.
By me?  Indeed not.
Indignantly I emailed the contact address for further information because the site is asking for people's money, although camouflaged as a 'Friend of Unity Scotland'.  In fact there are four standards of Friend - varying from a Red to a Platinum (£15 to £100 a year).  If you are foolish enough to send money to an anonymous organisation, you can become a Platinum member and receive a 'free' Unity Scotland golf umbrella which, in reality will cost you £50 - the difference between a Blue and Platinum Friend(ship).
Once I realised this site may not be driven by parliamentarians but was obviously driven by politicians, I decided to ask my Twitter followers if anyone knew the site owner(s). The replies arrived within minutes and thanks to all who answered.
The domain is registered to a Callum Campbell who lives in Bridge of Allan. One respondent was kind enough to mention that 'funnily enough Bridge of Allan has a conservative councillor called Callum Campbell who lives at the same address at that stated on the domain registration'.
It was also mentioned that the site seems to be in need of a bit of an update as there's nothing new in their news items since 6 November. Ah, the enthusiasm of the unionists!
Further information was that the address for the receipt of monies - 1 St Colme Street, Edinburgh - is a suite of offices and my informant says, "it looks like they're renting a desk in order to run a twitter feed and not much else right now."
Mr Campbell is no shrinking violet so why doesn't he state his political allegiance on the Unity Scotland site?  Why imply the site is not politically structured when it clearly is?
Sites similar to Unity Scotland will become more plentiful as we go towards the independence referendum date, but I hope others will be more candid. What the people need is open and honest debate.  Mr Campbell's site, because of its lack of openness, does his cause no favours. In fact it conveys an aura of sleaze.  Of course, not all those in favour of the union will behave in such a manner, will they?
Tweet
Posted by subrosa at 09:14

Thanks for this, Ruth. It's important that this kind of thing is flagged up.

We'll have to keep our eyes peeled Peter as more will appear no doubt. I was irked by him asking for money without disclosure.

What a jolly wheeze…

I've expressed a wider disquiet with sites that seek donations, but appear not to publish accounts. I've been tempted myself to include a donations button, but have resisted so far ...

Great idea to supplement the pension.
Is it taxable? ;-))

And should it be declared under political donations?

This has the making of an interesting matrix.

Where can the rest of us Brits express our desire to 'offload' or 'retain' our northern brethren?

Try a create a decent English Party, instead of the racist, jingoistic, nuclear bombing things that pass for parties at Westminster. Get a real alternative that speaks for England. and stop calling yourselves Brits. Rediscover your pride in your english identity.

Remember this lot One Dynamic Nation who got airtime on BBC Scotland seems no one is listening.

Well you named him (maybe) identified a place where he(and his family) might live.
And if your intent is carried out no doubt a Patriotic Scottish nationalist will go round and cause damage to the family property or the person himself.

'Unlike the poor badgers, the death of the cybernat this year won’t be as a consequence of a cull. More accurate would be to say this year will see the demise of the stereotype negative cybernat'

Seem like even the snp wish the Cybernat dead and out of the way.

It got a mention here..

Mr Campbell isn't keen on having too many windmills and wants the Beauly to Denny powerline put underground so he's got some good ideas.

Maybe he tried to keep the Unity thing apolitical to avoid mentioning being a Tory and killing it at birth ?

Well, we know where you stand, Nikostratos, from your profile. I quote "... love to see the NATS foaming at the mouth"

Somebody's foaming at the mouth and it ain't the Nats.

If this site is being run by a Tory, will the other political parties in Scotland be running their own campaign? Will it then be called 'disunity Scotland'?
As to the £50 umbrella: it just goes to show that the Union benefit is still there for all to see. Stay in the Union and we will continue to rip you off.

Part of the new paradigm to privatise welfare for profit.

Sub prime web sites! Who would have believed it?

I raise my hat to you for that piece of investigative journalism.

Dodgy indeed if we have no idea what is being done with the money.

Joe Public: Surely you can see that it is only each constituent nation that can decide its own future. If Wales wants to leave the union, that is their business. It shouldn't be the business of Scots. Likewise, if England wants to leave the union, why not do so? (I wonder that it does not, from all the hard done by stories we hear from your right wing politicians about how they subsidise the rest of us.)

You really cannot expect us to as you for permission to leave your sainted union. In theory even the countries of the Soviet Union didn't have to do that (although the practice would have been different had any of them tried, I'm sure. Do you want the UK to be viewed in the same light as the Soviet Union?)

Niko. As a councillor, he will have registered his address, and it is available for all to see, as is his political agent's.

If he wants to raise money from the public, the public has a right to know who he is and where he is. And a rented desk in an office in the capital isn't good enough.

I'm surprised, given some of the things you have said about Tories, that you would care much about his well being.

A jolly wheeze indeed JRB and I suspect it's legal too.

Peter I will never ask for money from my readers because I do not blog for financial gain. The fact I have a regular, loyal readership is payment enough.

At times I've been tempted by advertising offers though,but have resisted so far.

I think the brolly might be Apogee - VAT it's called. :)

Here's your opportunity Joe. You could begin an 'offload' or 'retain' site. I wouldn't advise asking for Friends until you've cleared that with the taxman though. :)

Peter, in my Take Your Pick selection to be published later, there's a link which examines the latest Social Attitudes Survey which states the percentage of those wanting an English parliament has reduced.

Jings Niko, everything is there in the public domain. He's a local councillor for goodness sake and he's content to put his photograph on his site.

I actually think your comment is bordering upon offensive Niko.

Maybe he did RM, but I would say the site has been professionally designed or, to put it another way, Mr Campbell has a good knowledge of web design.

The unionist cause does seem to be floundering Gedguy and it's hardly started.

Somehow I can't see Labour joining with Mr Campbell. Much as I think many Labour supporters these days are misguided, surely few would be foolish enough to part with even £10 for 2 car stickers?

Tris, I only asked the question on Twitter. The praise must go to those who responded. They know who they are.

I'm assuming the money will pay for room hire etc for the 'events' which may or may not take place.

His outfit followed me briefly on Twitter. When I gave him both barrels he ran away with his tail between his legs.

Obviously wanted support for his warped lies rather than truth, positivity & an aspiration for a better freer Scotland.

Sir, one barrel from you would be enough for any unionist to run as fast as their wee legs could carry them. :)