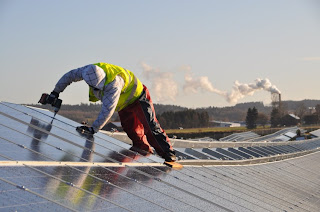 We are not alone in our protest of green taxes on our energy bills - The Germans also have the problem.

Angela Merkel decided last year that nuclear would no longer be Germany's main supplier of power and renewables were the future.  German has promoted solar power for many years. but now it's inefficiency has caught up with it. It seems 56% of all green energy subsidies go to their solar systems which produce only 21% of subsidized energy.

The relationship is just the reverse for their wind energy projects and they're not doing so well either. For the same cost, wind supplies at least five times as much electricity as solar and even biomass plants are three times more efficient.

For a while it seemed that at least the German solar industry was benefiting from the generous subsidy rates, but the green economic miracle has, in the case of the solar industry, turned out to be a subsidy bubble.

In a country with a similar climate to Scotland, in the north at least, solar was never going to stand alone and would always need propped up by government money. I'm sure the Scottish government is taking note of Germany's renewables problem and if not, why not?
Tweet
Posted by subrosa at 09:17

The feed in tariffs for solar are being reduced from 43p to 21p in March SR so, like all renewables, the solar industry will die as the teat of taxpayers money is turned off.
The SNP are still going for a 'renewables revolution' despite all the evidence from abroad that it won't keep the lights on and will bankrupt us.
Well not all of us. For 6 windmills the landowner gets £1,000 a day in rent.

This is not the only issue. Because the Germans have stepped away from nuclear power and renewables are not yet able to pick up the slack, German greenhouse gas emissions are going to rise considerably for a number of years as the need more power from Gas & Coal plants.

Fossil fuel subsidies: a tour of the data

This tidbit of information, which will hopefully begin to contradict the usual lies about the need for hefty subsidies for the wind sector, has been publicised by EWEA, the European Wind Energy Association in a report on the merit order effect (PDF).

I see that part of there argument is the use of diesel to keep the windmills rotating in periods of calm airflow. Since nuclear power requires fossil fuel external power to keep them running 24/7 all year long for decades/centuries negates the argument against renewables.

cynical.
I think the main problem with wind is that it produces power when it's not required ( middle of the night etc) and so has to give the energy away almost for free or get paid to shut the windmill farm down to stop destabilising the grid. A poor return on the multi billion pound investment.
Last years cold winter saw our 3,600 windmills producing 0.2 % of our needs for many weeks.
I've been monitoring again this year and it fell to 1.2% during the cold snap.
So with wind you need a 100% back up system from coal and nuclear etc and so end up paying for two energy systems in parallel at great expense and yet it actually increases CO2 ( harmless gas essential for plant growth but hated by greenies).
Germany has also found that it's offshore wind farms will only have 10 year lifespans at the most due to the effect of swirling currents on the base of the structures. Some windmills have dropped over a metre into the North Sea due to this weakness.
The 2008 Climate Bill means we will spend £20Bn a year for the next 40 years to build more windmills putting £300 - £6,000 a year onto our energy bills ( I've seen figures ranging from these two numbers which shows the Huhne is clueless)
The main worry for Scotland is the 100% renewables target as it will mean being dependent on France and Russia etc for our energy as our coal and nuclear plants are de commissioned and the wind forgets to blow.
Worrying future indeed.

The problem of the wind not blowing (or blowing too much!) is really an argument in favour of improved energy storage rather than against wind energy per se. There's a lot of work to be done on the storage front of course (more hydro-electric schemes might be one answer, but they of course come at an environmental cost themselves).

If storage proves an insurmountable technical obstacle then one has to start thinking about finding uses for the energy closer to the source. Perhaps we could get into the aluminium smelting business, like they do in Iceland (very controversially due to the flooding of a highland area)? Or try to take a chunk of the data centre market (we have an advantage here in our windy, cold weather - less electricity is needed to cool the computers!)? There could be some good jobs for the Hebrides/NW Scotland if that was the route we wanted to go down.

We could also mitigate the storage issue with better grid connections to our European neighbours, something I believe the Scottish government are already working on. And of course the end of the tariff for providing electricity from sparsely populated areas.

Of course maintaining a sensible mix of generation sources is important. As I understand it the SNP have said we'll generate the equivalent of 100% of our electricity needs by renewables. In other words I suspect we'll still have some coal and/or nuclear to keep things ticking over.

I agree that the future is worrying especially as living on a finite world our energy sources are continually being depleted. That is why harnessing free fuel supplied by wind, wave, tidal, hydro, and solar are becoming the only long term viable sources that we are going to be left with.

Yes they can't supply all our present needs which is why we, especially later generations are going to have to learn to live with a lot less before we end up with none at all.

forfar-
Storing wind energy would be good but is just a pipe dream.
Smelting requires lots of plentiful, reliable energy and wind is the least able to fulfill this need.

Wind and wave energy isn't free. The 2008 Climate Bill will cost £20Bn a year for the next 40 years to help build windmills.
Estimates vary from £300 a year to £6,000 a year added to our energy bills to pay for windmills etc. When the wind and solar tariffs are removed the industry dies off. That's why no energy company would get involved with wind or wave unless it was so heavily subsidised and why they move from country to country as the subsidies dry up.

There is enough coal and shale gas to last for many centuries by which time thorium or some other energy source will be available.

There is enough coal and shale gas to last for many centuries by which time thorium or some other energy source will be available.

There might be a lot of finite resources out there but they are increasingly becoming out of reach as the EROI value is eroded. e.g. It's like giving the bank a tenner knowing that a fiver is all one can ever get back.

Thorium will never happen as we are nowhere near getting a material strong enough to withstand the temperatures involved in a full scale plant even if the they ever succeed in the process.

cynical..
The US are allowing shale gas extraction and reducing electricity prices by 50 %. States are scrapping wind farm subsidies next year making them unprofitable..

"A shale-driven glut of natural gas has cut electricity prices for the U.S. power industry by 50 percent and reduced investment in costlier sources of energy.

Think of the advances in energy in the last 200 years. From water mills to nuclear power. Do you not think we'll advance by the same amount in the next 200 years ? In the meantime we don't have to rely on wind power. A backward step to an early time when it was needed to grind corn and slowly travel the oceans.

Scotland is going to rely upon wind RM, but as you see from the source link, wind isn't that great. (We know that of course).

The pay-off for having wind is extraordinary as you say.

I'd disagree Douglas. The Germans have been ahead of most in the renewables business with solar and wind being their prime alternatives.

Thanks for that CH. Another input to the debate.

"Storing wind energy would be good but is just a pipe dream."

They're working on it in the US -

Nuclear may cost a lot more in the future -

Quote - "Although most of the complaint concerns the UK, some of its ingredients would apply to other EU nations as well, especially the capping of nuclear liability.
Estimates prepared for Energy Fair suggest that if operators had to buy insurance at the market rate, that would add at least 14 euro cents (12p) to the price of one kilowatt-hour (kWh) of electricity - and potentially 20 times that figure.
With electricity in the UK retailing around 12p/kWh, that would mean at least a doubling of the price."

Thanks for the links Barney. I think many countries, including Scotland, are looking at wind energy storage but none are anywhere near a solution.

That's the catch 22 situation isn't it? Nobody knows what nuclear will cost - or wind power.

Agreed, but I'm not sure it is a real Catch-22. What is certain is that any energy produced from finite resources (Hydrocarbons, nuclear) will, with our ever expanding population and demand become more expensive.

"Renewable" energy sources are in their technological infancy and relatively expensive at the moment. Hopefully through refining their processes we can we can make them more efficient so they can work alongside the finite sources until the time comes when they become more economically attractive. Just saying things like "when the wind don't blow or the sun don't shine we get nothing" is too backward looking for me.

No-one walks in front of motor vehicles with a red flag any more.

I'm sure development will happen but I'd also like to think endless subsidies aren't the answer. We're in a trap right now between investors making fortunes out of wind and 'customers' making money from subsidies.

The end user is the financier and eventually people will not be able to afford to pay.

However Barney, I'm an optimist and foresee us having a reliable and efficient energy system within the next 20-30 years. I won't be here to see it though.

Barney.
Renewable energy like wind and solar has failed and been found to be useless. Despite 50 years of flogging a dead horse. The industry lives or dies depending on whether the taxpayer teat is turned on or off,
It's only being used because so many reputations would be trashed if we all admit it.
Ditto the man made global warming scam.