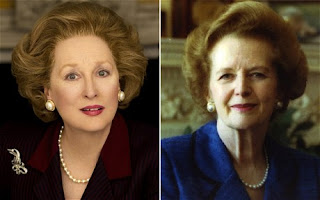 Yesterday I accompanied a friend to the pictures - as we call cinemas in Scotland - to see The Iron Lady. Our visit did not stem from our political leanings but from our admiration of Meryl Streep's acting abilities which were, on this occasion, astounding and certainly deserve an Oscar nomination. I'd say she deserves the Oscar but of course I'm biased.

I admit I've always had a grudging respect for Margaret Thatcher and the reason is that she has been the only woman to break through the glass ceiling of male-dominated politics, but I have tried to be objective in my assessment of the film.

The past week or so I read several professional reviews but none quite prepared me for the film.  They covered the political aspect but ignored the underlying story, which is one of a strong, principled woman falling into a few of the traps of ageing.

it is a love story which shows how absolutely crucial to her ability to function in office was her relationship with Denis. His support was vital to her survival. Denis Thatcher, who died in 2003, is a recurring presence in the film, sometimes as a spectral companion, a benign image of hallucination relieving her current loneliness, sometimes as a real-life part of her past. Jim Broadbent's portrayal of Denis is a solid performance, although very little of Denis's inner characteristics are exposed.

The film is set in the present day and introduces the viewer to a an ordinary looking elderly woman who has decided to let go of her dead husband's clothes and is ambushed by select memories of her past. It has strong feminist undertones, which is unsurprising given that it has a female director, writer and star and it cleverly highlights nuances of the British class system in which Thatcher was viewed as an outsider.

Did I enjoy it?  I enjoyed witnessing the skills of Meryl Streep, but I found the structure of the film slightly confusing. It drifts from present day to the 70s and 80s and again to the 60s in a stumbling and non-cohesive way. It conveys little detail of her years in No 10, although it touches on some of the main events without detailed explanation.

Some say the making of the film should have been delayed until Margaret Thatcher is dead. I disagree.  As well as paying enormous compliment to her strength of belief, it also highlights the loneliness and confusion dementia can create as we grow old. Ageing and its consequences happens to us all yet it is a process largely ignored by our society. Margaret Thatcher can afford to pay for companions, but The Iron Lady shows that money can't buy the love of those you love. To explain, Mark Thatcher is not cast.

Would I recommend it?  Only for fans of Meryl Streep. Male politicians will avoid it at all costs. Love her or loathe her, the film must make many past and present male Conservative politicians feel they've 'escaped'. I have no doubt that In the future there will be films made which concentrate on the behaviour of the politicians of that era. By then both Margaret Thatcher and myself will be plant food.
Tweet
Posted by subrosa at 19:41

Interesting to read your review. I want to see it myself and had planned to go this afternoon, but various things meant I have had to delay my visit - I hope to see it later this week or perhaps early next.

Well at least you actually went to see - unlike the woman who was on the BBC Breakfast sofa this morning slagging it off because it didn't concentrate enough on the miners' strike! As Bill Turnbull repeatedly said to her "Shouldn't you actually see the film before you attack it?" Fair point, I thought.

Dennis was always out of the limelight but it is often forgotten that he was Sir Dennis in his own right and a successful businessman, so she was already Lady Thatcher long before her baronetcy.

I look forward to seeing the film myself.

I gave up watching that programme some years ago Dioclese. Is it any wonder when they bring on a left winger who hasn't even seen it.

I hope you find it enjoyable.

It's the concluding part of a triptych (like Three Colours, Red, White and Blue) on British politics that began with the Comic Strip's "Miner's Strike" and "The Hunt for Tony Blair".
I've not seen the film yet but I was very impressed by Miranda Richardson's portrayal of the under-rated Barbara Castle in "Made in Dagenham".

You may well find that when watching Meryl Streep you actually think you're watching Margaret Thatcher Brian.

I saw the film, and I was utterly disgusted by it.

It was a gross violation into the personal sufferings of an elderly lady no longer capable of defending herself.

It wasn't primarily an exploration of her politics. Nor was it really about what drove her as a person (only flirting with the role of her father as an influencing figure ... and NOTHING on her religious upbringing which was DECISIVE).

All it was was a film fit for those fascinated by morbid curiosity.

Disgusting. I want my money back.

And for pitys sake, leave Mrs T alone, she is no longer Iron. She is just a vulnerable elderly lady.

And has anyone even thought about what this will do to her family and friends? Seeing her decline paraded about for NO reason whatsoever?

Thanks for your comment Dean. Obviously I disagree with you as I feel the maker was sensitive in showing the effects of old age for many.

It has done what I thought though - made the younger generations aware how isolating and distressing growing old can be regardless of class or money. Why shouldn't Margaret Thatcher be used to highlight this? Would you have been so appalled if it was my neighbour's struggle with dementia? Possibly not because she only ran her own business for 40 years.

Anything that highlights the despair etc of old age is not morbid, although the young may think so.

I came across Maggie in Asia; she talked to a small group of us. She struck me as being like a zombie; perfect hair, mask-like face, nothing human about her. My strong impression was that she was a victim of brain-washing. She defended the local dictator who had just carried out some massacre.

That is a despicable accusation!

That is an interesting comment Aangirfan. I don't know anyone who has been in her close company so find your evaluation intriguing. From what I've seen on TV etc I assumed she was forever animated. How wrong can I be.

Dean, please, everyone is entitled to air their views.

That isn't a view, it is an accusation - let him prove it!

It's an opinion, an assessment whatever you want to call it Dean. By the way Aangirfan is female - not that that makes any difference in this case.