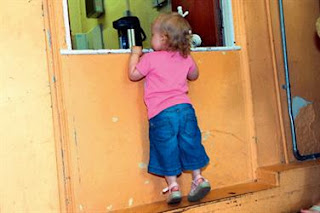 According to Children's Minister Sarah Teather, there are still 2.8 million children living in poverty in the UK.

Child poverty in the UK is defined as 'household income below 60% of median income'. The median is the average of British income. I find it shallow that child poverty is assessed only in financial terms as physical and emotional development is equally important to all.

In the 1950s a widely publicised report from Joseph Rowntree, based on surveys in York, claimed that less than 5% of working class households were in poverty (although that figure was later questioned). Being a child of 50s I saw far more poverty then that I see today. It wasn't unusual for children to have only one pair of shoes and hand-me-downs for play and school wear and I can't recall any child intimidating another purely because of their clothing. We were more or less all in the same boat.

Family values were somewhat different then. Few households had money to spend on 'luxuries' such as new furnishings and anyone who was wealthy enough to buy new furniture from a sale room was fleetingly envied. Anything new, from a saucepan to a pair of shoes, was treasured by the owner. Money worries occurred in many families and 'treats' were few and far between. My family treat was a bottle of American Soda and one scoop of ice cream which my father bought on the first Sunday evening of every month. We would make 'ice drinks' with the ingredients and go to bed feeling extremely lucky.

There was no Pill in those days and I was aware of women, including my own mother, rallying round when another baby arrived in the street. A pram, cot and clothing were often supplied by other mothers on a loan basis.

Fathers usually had jobs in those days. Mothers stayed at home to look after the house and children, although my own mother decided she wanted to work and did so in 1952. I was a latch-key child cared for after school by friends' mothers until I was old enough to reach the door lock and let myself in, or my brother appeared.

Along came the Family Allowance, a 5 shilling (25p) a week payment given to parents - usually in the mother's name - only for their second and subsequent children. Its introduction was intended to prevent families being financially penalised for having children at a time when there were concerns that the birth rate had to be restored.

Now second-hand clothing is fashionable to a degree although most sale rooms have closed. The UK enjoys - in straight cash terms - some of the most generous child benefits in the world, with payouts more than twice the rate of France. Of the major Europeans economies only Germany pays more and includes extra payouts for parents who are out of work.

From next year child benefit is to be stopped for higher taxpayers and there is little argument about it. Those who earn less than £44,000 a year consider it fair. What it does do is make the child benefit no longer universal.

However the question was - does child benefit help lift a child out of poverty? It may not do as much as we like to think. In 2010 Frank Field was asked to investigate the benefit and came up with the idea of cutting it off once a child hits 13 and/or taxing it.  His proposals were rejected by those, like Yvette Cooper, who said "All families need support as their children grow".  But do they require or should they expect the help via the state?

Child poverty can only be reduced by parents taking responsibility for their children. The introduction of Sure Start centres in England was one of the few Labour successes, but owing to 'budget cuts', councils have begun to reduce their numbers.

Not every family needs official help with bringing up their children, but as a social democracy, we need to ensure that those children in need do not slip through the many child support charities and quangos, which are in constant need of more funding. Scotland is still dragging its heels since the government's Early Years Framework was published in 2008, although the introduction of a Minister for Children and Young People has brought the issue to the fore.

There is no pot of gold at the end of the rainbow nor a bottomless pit overflowing with fifty pound notes to pay for these services. Frank Field may have been on the right track suggesting child benefit should be stopped earlier. Would curtailing it at 16 and reinvesting the savings into early year care, affect those 16+ year olds from continuing in formal education?

Somehow the poverty-benefit trap has to be broken and the only way is to nurture the physical and emotional wellbeing of our children.
Tweet
Posted by subrosa at 09:51

I may be misremembering as it's a long while ago but I thought the family allowance came in as a replacement for the married man's child tax allowance. Remember those days when the husband got allowances for wife and kids because couples were taxed jointly as a household?
The change to family allowance 'vouchers' being that the mother would get the money direct irrespective of husband's working status and also dad wouldn't get it mixed in his salary and therefore wouldn't spend it down at the pub.
At that time anyone could cash the vouchers at the post office but later I think it was restricted to the mother.

It wasn't unusual for children to have only one pair of shoes and hand-me-downs for play... We were more or less all in the same boat.

Much of the perception of poverty is, I think, due to expectations. Your description above could equally well apply to Cornwall during the recession of the 1990s, when our children were young.

We then moved to the South-East, and were amazed by the difference in expectations - the Cornish school had a thriving second-hand uniform trade, while its Home Counties equivalent had scrapped the practice as 'everyone wants new', and it was the same story with football, ballet class and Brownies.

The same thing applied to toys; our children were astonished at how many toys their new classmates owned - and their resulting casual attitude to loss or damage.

I think you are right and that as a universal benefit Family Allowance has probably had its day. However as one of those families just falling into the bracket (by a mere £100 or so) that will lose it, and having only one earner, I do feel hard done by when families with two earning up to £87,000 will keep it.

I feel it would be much fairer if my OH were allowed to claim my tax allowance. It's not doing anything, just sitting there wasted. At least that would keep me in the system! At things stand when I lose my Child Benefit I disappear - I won't be able to prove I was raising the children for these years and have my NI contributions covered and go towards my pension. I will no longer exist as a separate entity at all. Chatteldom beckons.

It would also be nice if families like mine were treated like those that run private jets and given a bit more time to adjust to this fall in our income.... but it seems only the mega-rich need extra time to adjust their budgets.

Well if Child Poverty is defined in those terms, the poor will indeed always be with us. And it becomes a logical impossibility to eliminate it, unless all incomes are equalised.

Part of 'child poverty' is induced by paying 'child benefit' to serial-breeders.

As in many areas of benefit, decades of tinkering and adding for short term poll rating reasons have created Another Fine Mess. The problem now is to sort it out rationally before the scale of the crisis forces its own solution, which may not be rational.

XX Of the major Europeans economies only Germany pays more and includes extra payouts for parents who are out of work.XX

I have heard, that after 16, the money is paid directly to the CHILD, as well.

I think you're right Woodsy but it's difficult to find evidence online.

Aye it was 5/- vouchers to being with right enough.

I think you've put it far more eloquently than me Macheath. Many thanks.

My main point was that none of us felt 'poor'. We had food and something to wear and I was fortunate insofar as we could afford to have a regular fire burning once my mother started working.

I don't feel hard done by with those earning up to £87,000 receiving it Nikkii. They obviously pay a bigger sum in tax and will claim no other benefits. If a benefit is to be 'universal' then it should go to all.

That is another point I should have highlighted and thanks for bringing it up - the fact that those women in higher earning households will lose their NI contributions. This will now cost these women because they will need to contribute towards their pensions even though they are not in paid employment. So they lose out twice.

Hamish, I still don't think we'd erradicate poverty even with equalised incomes. There will always be those who neglect children.

Unfortunately there are people who have children not for any other reason but as added income Joe. I can recall working with a chap who took early retirement at 50 when it was offered in a package.

His reckoning was he would afford it if they managed to have another child, because a 4th child would introduce them to a variety of benefits.

He wasn't an uneducated man. He was a surveyor.

Another Fine Mess right enough Demetrius but will this present 'tinkering' reduce child poverty? I think not for the reasons I've mentioned previously.

The German system is complex Furor and I had nothing to do with it when I lived there - because I didn't have children.

However here are a few links. Note that Kindergeld is paid up to 18, 21 if unemployed and 27 if in full-time education.

Germany also has a benefit for parents:
http://en.wikipedia.org/wiki/Elterngeld

It seems to be means tested.

Rosie, Woodsy,
Family Allowance was introduced 6 August 1946. It was renamed Child Benefit in 1977.
The Married Man's Allowance (Wife's Earned Income Allowance, actually) added a single person's incometax allowance or the wife's actual income if lower to the husband's PAYE code. It was replaced in 1991 by the Married Couple's Allowance by Norman Lamont who introduced independent taxation. Gordon Brown scrapped MCA in 2000 except for married couples where at least one spouse was born before 1935. He replaced it with Child Tax Credit.
I worked in a JobCentre in case you're wondering why anyone should know all this :o)

Brian, what would I do without such expert knowledge? Much appreciated by me and I'm sure by others.

XX
However here are a few links. Note that Kindergeld is paid up to 18, 21 if unemployed and 27 if in full-time education XX

I knew it was something ridiculous. But 21 and 27 !?!?!? That is not "ridiculous" THAT is totaly raving bonkers bloody INSANE!

If in full time education Furor. :) I suppose it's to encourage young folks to take PhD type courses.