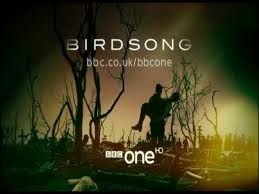 A post from Tedious Tandrums.
The BBC have been heavily advertising their new shiny two-episode Birdsong programme based on the book by Sebastian Faulkes. The adverts showed a few scenes and looked interesting but I wasn’t convinced. I’d hoped that Spielberg might have picked it up or Saul Zaentz the producer of films like The English Patient, One Flew over the Cuckoos Nest, The unbearable lightness of being etc.
Zaentz could produce a film, heavy on the romantic side and treated with respect and care. Spielberg could have brought the realism to it as he previously did in “Saving Private Ryan”. If that film was about anything it was about the true horror of war rather than the censored versions we’ve been spoon-fed.
I just wasn’t sure I should watch it. What if it was a poor reflection of the book? What if the story was diluted? What if, what if, what if? It’s one of my top ten favourite books and I have the greatest of respect for the men who fought and were slaughtered in action during the First World War.
I decided to watch it. I thought I could stop if it wasn’t to my liking. However, I was pleasantly surprised, it wasn’t bad. Not as “real’ and the romantic part wasn’t overdone. So far so good.
Having the Great War brought back to the fore as it were, has reminded me of two things; the poetry created by the likes of Wilfred Owen, Siegfried Sassoon and Rupert Brook to name but three. I really must go and visit the War Poets Collection at the Craiglockhart Campus of Napier University. Owen and Sassoon were there during the war when it was a hospital.
The other thing it has reminded me of is that for all the cost in human terms that “the war to end all wars” was supposed to be we just haven’t learned the lesson. Here we are almost a hundred years down the road and there has rarely been a gap between conflicts. The recent Iraq and Afghanistan actions reinforced the incompetence of the MOD and the failings in the services procurement system. Soldiers lives have been lost as a consequence. Vehicles were inadequate in the protection they were supposed to provide, costing young men their lives. Body armour being shared rather than being available to all, again cost lives. The Americans do things slightly differently. They aim to send their forces out with the weapons and kit significantly better than the enemy. They’ve just started rolling out a gun which fires a grenade accurately over long distances and can then be detonated at a point chosen by the person firing it. They can now hit targets hiding behind walls barricades etc. A game changer apparently although war is only a game if it’s played on a Playstation or X-box.
Unfortunately our sabre-rattling politicians are lining up the next conflict. Iran. Like we need another conflict.
Men and women sign up to join the forces. When they join up and take the Queens shilling they can expect to see action but they should also be protected and only put in danger if it is the last resort. Even then they should have the best kit, if they don’t have the best kit or even appropriate kit for the job they should not be put in danger.
Most incriminating of all of our various governments over the years however, is that if our forces are injured they should get the best treatment possible and if their injury means they need care and support for the rest of their lives the state should pay, ending the reliance on charity which is an insulting way to treat our service men and women. The state should also provide a reasonable level of financial support to the partner and children left behind if a life is lost and this should continue as long as it is needed.
War, conflict or whatever name people wish to call it is disgusting and inhumane, the way our forces and their dependents are treated should never be disgusting and inhumane. When planning the Scotttish Defence Force Alex could do well to bear that in mind.
I don’t think the Scottish people want our forces involved in any conflicts, perhaps Alex should seek a mandate from the people. It’s far too important a decision for him or his government to take on their own.

When I was a young lad my grandfather lived with us. He did so because his lungs were in tatters and he had virtually lost all sight, both as a result of having been gassed in WWI

My late father, right up until his dying days was frequently revisited by nightmares of the horrors and hell he experienced in Burma during WWII.

My own friend who served several tours in Northern Ireland was mortified one day when out shopping. On hearing a loud bang he instinctively threw himself on the ground, much to the amusement of passing pedestrians.

And the son of a local farmer, ages with my daughter. Now back home after 10 years of service. But he has returned as the hollow shell of the bright and lively young man that left.

Four generations scarred by the horrors of war, and still we do not learn.

When will we ever learn?

My father, WW11 51st HD, always maintained and wrote that today's politicians do not rattle sabres but instead - rolled umbrellas. Along with the rattling of hard cash from the other non-combative war-mongers and exploiters perhaps we insult our courageous military by impling the non-military protagonists would even be able to handle a sabre in order to rattle it? I have a clear idea, however, just where I would like to put a sabre!
Subrosa and TT - may I recommend Moridura's recent Monday piece on "Reflections on defence and the military".

For me, 'Birdsong' dragged on a bit and not a lot happened. Broody Edwardian gentleman finally gets his oats with the bosses wife , then goes to war and gets shot. Did I miss anything ?
Can't believe there's a part 2.
All part of the plan to sell this guff to the thick yanks who fall for this image of 'the old country'.
The film 'Acid House' from the novel by Irvine Welsh is more accurate of the UK.

JRB -perhaps when we take responsibility for our own democracy we will have the tools to control our destiny and create a path future generations will follow.

Robert Southey wrote "After Blenheim" in 1796. Remember the line "But 'twas a famous victory"?
It was probably the first anti-war poem but what immediate good did it do? War as a means of resolving conflict will only end when everyone learns it is in their best interests so to do. But even then idiots wil remain to cause trouble.
As for kit not being up to scratch, the Armed Forces issue the specifications based on their expert knoledge, have it rigorously tested and then discover that the other side isn't fighting the war they expected. Britain went into Iraq and Afghanistan with the arrogance of non-transferable experience. Snatches and berets would be enough to win hearts and minds when combat engineers to remove ambush points would have been better. Of course the Snatches were sent because the wise old soldiers wanted FRES vehicles to fight joined up war in division strength as they had practised in Germany for years. Then the Vector coffin on wheels was rushed in to fail as was the Panther and other vehicles. It wasn't until the Americans quickly learned the lessons of MRAP vehicles from our experience in Malaya, Cyprus, Aden and Bosnia (ourproven RG-31s were sold as surplus) that UOR purchases of Mastiffs etc appeared. Even then the troops baulked at riding in "a truck" until lives and limbs were saved. Sometimes the macho, can-do attitude is the soldiers worst enemy.
As for the treatment of wounded soldiers, that mirrors the treatment of disabled people in our society. It needs to be improved across the board.

Will we ever learn JRB. Doesn't look like it. More's the pity. Thanks for your comment. TT

You are right Clarinda. The politicians and those who stand to gain from conflicts need reigned in. I'll away and read the post you recommended thanks. TT

I really hope that's the case thanks Crinkly. TT

RMcG. I'm still waiting for the definitive film which captures the reality of the WW1 for the ordinary soldiers. Too many accounts come from the Officers although this is understandable given the times.
Thanks. TT

If those who make the decisions about entering a conflict and those who provide the kit had to actually do it for real along with the troops there would be far fewer conflicts and far fewer casualties. If only. Thanks Brian. TT

Actually, the currently used doctrine of airpower to disrupt the enemy's command etc capability means that those who make the decision to enter a conflict etc are as much on the frontline as their troops.
Only by "armchair generals" taking back some control from experts can costly bloody wars be avoided:

I'm familiar with Richard North take on military matters. I have a great respect for his knowledge and continuing efforts to be heard. I think he provides a valuable alternative view which has merit.

The futility of having politicians and senior officers involved directly in the conflict is nil. More's the pity.

TT,
Apologies for my oversight in not thanking you until now for a great post that allowed a very enjoyable discussion on an important and serious topic.