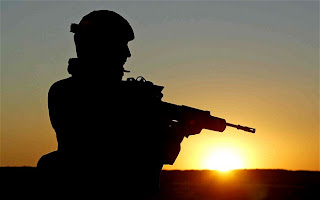 Yesterday a Royal Marine was killed south of the Afghanistan capital Kabul. He was fatally wounded after the vehicle in which he was travelling was caught in an explosion.

A total of 392 British troops have died since the start of the Afghanistan war in 2001.

This week David Cameron indicated he was planning further withdrawals of troops from the country in 2013 after the 500 due to be pulled out in 2012. He refused to give exact timescales for how Britain's deployment would be withdrawn ahead of his deadline for all combat troops to be out by the end of 2014.

Why he refuses such a request baffles me. His boss, Obama, has withdrawn 10,000 US troops this year and very publicly declared he intends to withdraw another 23,000 by the send of next summer. Currently there are 91,000 US troops deployed in the war. The Taliban need wait only another three years at most before they resume their hold on the country now they have a reasonably comprehensive calendar of withdrawals.

Karsai expects the international community to support his country for at least another decade. He wants the money and knows NATO will provide it, yet most people know that no matter how much money is given to Afghanistan, the country will never rid itself of the Taliban.

What a mess. This war is one that future generations of our young people will be paying for throughout their lives. One which is the responsibility of politicians such as Bush, Blair, Brown, Obama and Cameron.

Our PM isn't deterred by military deaths or the financial costs of war. His new year resolution suggests he rather enjoys being a warmonger and the London summit he has convened for February will confirm his determination. This could be the next war. Iran appears to have been put on the back burner, probably because the timing would be too close to the US elections, but not to be outdone the PM has found another country which is 'a failed state that directly threatens British interests'.
Tweet
Posted by subrosa at 09:09

And the day western troops pull out, exactly the same will happen as is now happening in Iran, tribal or religious war will break out.
Only idiots, or western politicians, believe we can establish our style of democracy in such countries.
So why are we wasting British lives on this futile exercise? We should withdraw our troops now, and send a decent number of them to the Falklands as a deterrent.

We are in Afghanistan because the industrial military complex is making a lot of money. If Alexander the great can conquer the country then the military might of the USA could wipe it out any time it suits them, but I don't believe it does suit them to win this. It was a bit like Vietnam, it could easily have been won by the Americans so why didn't they. Same reason; too much money being made by contractors to the military machine. When you get the President of the USA coming on national television warning the American public about the industrial-military complex then you need to worry why they are having all these long wars. Just because Eisenhower did this in 1961 does not mean that it isn't relevant today; it is because it is still continuing.
As with any wars the first question that needs to be asked is: "Who's making the money?".

Having read the newspaper link this reminds me of the pre-war hostile press campaign by the British Government to instil a surge of moral indignation against a country they want to invade.
The start off with a couple of facts and, by the end of the piece, they are commenting on their own 'coulds', 'maybes' and 'ifs'.
I think you are right; this could be the next country. Not strong enough to hurt us(?) but a chance to use the new toys and kill a few other people.

The same ones who are making money in the financial war we are in.

THE PEACE CORPS AND
THE MAKING OF A RUG DEALER

My nose for following the money leads me to the gas pipeline that the US has been wanting to build since 1998. That would have the added advantage of annoying the hell out of the Russians, but I can't see that pipeline being built any time soon & the Russians must be pissing themselves laughing.

The whole thing has been completely insane, the Taleban are just waiting to re-take power & Obama has told them when they can expect to do that.

Maybe when they do the US can negotiate with them to build the pipeline which is what they should have done in the first place.

You couldn't make any of this up.

Terrorism is mobile. You cannot use conventional military tactics against terrorism, it needs intelligence not soldiers. The invasions of Iraq & Afghanistan have undoubtedly fuelled Islamist extremism so to invade a third country on the basis of a terrorist threat would be absolutely & utterly insane, which is why David Cameron may be considering it. The man is a menace he seems determinded to be as stupid as Tony Blair was.

That's more or less my thinking too EP, although I disagree with you about the Falklands. Why are we supporting an island so many miles away? I've never understood that unless we want the Falklands to be the last stand of the British Empire.

It is indeed Gedguy and the arms dealers are always rather too matey with politicians. In fact some politicians go to work for them when they give up parliament.

You're not the first to say this war could have been won years ago but that wasn't the aim of the US or the UK as you say.

Arms dealers, mineral dealers and all associated with them is your answer.

With Cameron's rhetoric about Somalia Gedguy and the fact he mentioned military involvement, it will be no surprise.

Excellent links CH. Many thanks.

This blogger had most of the detail about the gas and oil pipelines Observer.
http://centurean2.wordpress.com/2009/08/05/afghanistan-a-war-for-gas-and-oil-pipelines-2/

I have other sites with similar views but they're so tucked away in my 'research' folders I can't find them.

But I agree with you. As soon as NATO are out the country will revert to what it was - although it's leaders will be much wealthier.

We have a mass of intelligence in the military Observer but our politicians don't always heed the warnings.

This SAS Marine was perhaps part of a squadron or troop who operate in intelligence.