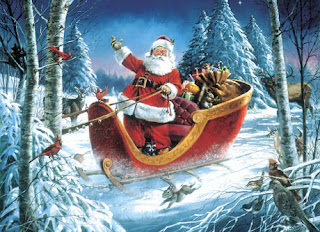 I. There are approximately two billion children (persons under 18) in the world. However, since Santa does not visit children of Muslim, Hindu, Jewish or Buddhist religions, this reduces the workload for Christmas night to 15% of the total, or 378 million (according to the Population Reference Bureau). At an average (census) rate of 3.5 children per house hold, that comes to 108 million homes, presuming that there is at least one good child in each.

II. Santa has about 31 hours of Christmas to work with, thanks to the different time zones and the rotation of the earth, assuming he travels east to west (which seems logical). This works out to 967.7 visits per second. This is to say that for each Christian household with a good child, Santa has around 1/1000th. of a second to park the sleigh, hop out, jump down the chimney, fill the stockings, distribute the remaining presents under the tree, eat whatever snacks have been left for him, get back up the chimney, jump into the sleigh and get on to the next house. Assuming that each of these 108 million stops is evenly distributed around the earth (which, of course, we know to be false, but will accept for the purposes of our calculations), we are now talking about 0.78 miles per household; a total trip of 75.5 million miles, not counting bathroom stops or breaks. This means Santa's sleigh is moving at 650 miles per second < 3,000 times the speed of sound. For purposes of comparison, the fastest man-made vehicle, the Ulysses space probe, moves at a pokey 27.4 miles per second, and a conventional reindeer can run (at best) 15 miles per hour.

III. The payload of the sleigh adds another interesting element. Assuming that each child gets nothing more than a medium sized Lego set (two pounds), the sleigh is carrying over 500 thousand tons, not counting Santa himself. On land, a conventional reindeer can pull no more than 300 pounds. Even granting that the Oflying¹ reindeer could pull ten times the normal amount, the job can't be done with eight or even nine of them; Santa would need 360,000 of them. This increases the payload, not counting the weight of the sleigh, another 54,000 tons, or roughly seven times the weight of the Queen Elizabeth (the ship, not the monarch).

IV. 600,000 tons travelling at 650 miles per second crates enormous air resistance < this would heat up the reindeer in the same fashion as a spacecraft re-entering the earth¹s atmosphere. The lead pair of reindeer would absorb 14.3 quintillion Joules of energy per second each. In short, they would burst into flames almost instantaneously, exposing the reindeer behind them and creating deafening sonic booms in their wake. The entire reindeer team would be vaporised within 4.26 thousandths of a second, or right about the time Santa reached the fifth house on his trip. Not that it matters, however, since Santa, as a result of accelerating from a dead stop to 650 m.p.s. in a milli-second, would be subjected to centrifugal forces of 17,500 G¹s. A 250 pound Santa (which seems ludicrously slim) would be pinned to the back of the sleigh by 4,315,015 pounds of force, instantly crushing his bones and organs and reducing him to a quivering blob of pink goo.

Health & Safety at Work - A Message To Santa:-

We are worried about how your little helpers might get hurt putting all those toys together. So here are a few crucial facts which may help you (and everyone at work) in making this busy time of the year pass as smoothly as possible.

Any equipment provided to you or devices or systems must be maintained in an efficient state, in efficient working order and in good repair. It might be advisable to have the sleigh checked over before you embark on your journey! So many children would be disappointed if you were only able to complete half of your deliveries! (The Workplace (Health, Safety & Welfare Regulations) 1992 as amended by the Health & Safety (Miscellaneous Amendments) Regulations 2002)

MANUAL HANDLING: Remember not to set yourself up for an injury. Risk assessments are important in all workplaces. Under Regulation 4 of the Manual Handling Operations Regulations 1992 you must avoid as far as is reasonably practicable exposing yourself to injury by lifting. If you have to, fit a hoist to your sleigh and don’t risk hurting your back. Too many children will be disappointed if you can’t deliver their gifts!

EQUIPMENT Under the Personal Protective Equipment at Work Regulations 1992 and 2002 you must be provided with equipment to be worn at work, which will protect you against any risks to your health and safety. Adverse weather is predicted so make sure you have adequate boots and you wrap up well. We wouldn’t want you to suffer with frostbite or indeed to sustain any injury by dropping anything heavy on your toes. And if you are provided with protective equipment you have a duty to wear it.

Santa, we don’t know whether you are reliant upon the equivalent of a sat nav device but this could be construed as “display equipment” and there is legislation to govern safety issues affecting display screen equipment, namely the Health & Safety (Display Screen Equipment) Regulations 1992 as amended by the Health and Safety (Miscellaneous Amendments) Regulations 2002. Your “workstation” should be analysed to ensure that it is suitable and sufficient. Please don’t set out on your journey until you are satisfied that all is in good working order. Your “employer” must ensure that you have had satisfactory eye tests. How calamitous would it be if you were to miss the occasional household because you have failed to keep up your eye tests?

There is other legislations which dictate the way employees have to work but not all affect your routine. The Control of Substances Hazardous to Health Regulations 2002 does not refer to the number of mince pies or glasses of brandy you find yourself exposed to – but be careful, you have enormous responsibilities on 24th December. Don’t let the youngsters down!

Well, good luck Santa. We hope that the above is helpful. We know you have made enormous efforts to keep everyone happy since last year. And in the unlikely event that you do have problems and you are injured at work, please do not hesitate to contact Rowberry Morris.

If you would like a free initial consultation to discuss a personal injury matter please do not hesitate to contact us.