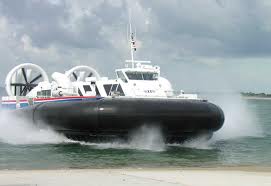 A post from Tedious Tantrums
They’ve done it again.
Who?
The councillors in Edinburgh. This time they have “vetoed” (are you impressed with the use of the most overused word in the past 24 hours word? How topical am I?) the planning application for the hovercraft service which would run between Kirkcaldy and Portobello. Apparently the plans were rejected due to the visual impact of the proposed ramp, noise and transport concerns.
If you are not familiar with the area where the ramp would be then here’s a quick heads up. It is down at Seafield, not far from the sewage plant, just along a bit from the Dog and Cat Home and the bus depot. Obviously this is a high amenity area (not). Notice also the cited transport concerns. The ramp isn’t far from the bus depot. The Lothian Buses bus depot. Where they park the buses at night and work on them. Where buses come and go all day long.
The service was trialed a couple of years ago. The deal was you could go down and get on for free I think and get a return trip. Millions of pensioners queued up to get on the hovercraft. The test worked fine.
It’s a no brainer. It’s a great idea, it would be an interesting thing to do and it would help commuters and reduce road congestion. It would also use the river which would be a very good thing.
It has draw backs however, or at least it has draw backs if you are an Edinburgh Councillor. The hovercraft apparently doesn’t need rails to run on. Therefore there is no requirement to dig up the Forth causing major traffic jams. No shops will close due to it’s non construction either.
Another aspect of unsuitability is of course cost. It’s likely to cost very little. If it’s cheap the other cities of the UK won’t be impressed so no point in doing it then.
Seriously, it’s now well overdue for someone to take Edinburgh Councillors aside and offer them an offer they can’t refuse. Basically they need to get their act together or they’ll be sent to Brighton.
Maybe they’d be too weird even for Brighton? There’s always Naples though. I feel sure we could find a suitable City for them to “improve”. Kabul? Tehran? Now they must need trams.
Tweet
Posted by subrosa at 09:36

I couldn't believe this TT. The pilot last year was tremendously successful and I've spoken to many who certainly would use this service rather than have the hassle of driving through to the city.

Of course the reasons for objection are obvious. One is that they don't want Brian Souter involved and another is 'We're Edinburgh'. Such a pity visitors and those living outside it aren't going to have this experience.

I remember using the hovercraft in the 1970's going to Bolougne (sp) in France on holiday. It was a great experience and felt like we were on a jet airliner as it powered up. Then seeing the water flying past the window as we launched into the channel was cool for a 12yr old !
Brighton is ok and shouldn't have to accommodate the dinosaurs from Embra cooncil. I hear the UN has been called in over the tram scandal and associated pollution in the vehicle rat runs springing up around the tram construction chaos.

TT - I always understood that despite a successful trial in 2007 the Hovercraft project was never a ‘done deal’.

Stagecoach themselves have always admitted that –
- they only planed to look at the case for a cross-Forth service if it was a viable commercial project for them.
- a number of other hurdles [other than planning] had to be cleared before any passenger service could come to fruition. “As we are very much aware of the current challenging environment in terms of both the economy and public finances.”

Stagecoach’s attitude did not appear as one of total enthusiasm and commitment, certainly it was a project worth a punt, but I don’t think there will be many tears shed in the Stagecoach boardroom.

Sad that politics may have gotten in the way of a potential tourist attraction. I can understand 'Stagecoach' looking at it, from a financial point of view, but I don't understand the attitude of Edinburgh Council taking this view. Anything which could increase tourism and jobs for the local economy should not be sniffed at.

I don't believe the visual impact chat at all, something else must be behind it.

I imagine it would be to do with subsidies, as I recall Stagecoach would have required financial help in order to make it viable. As JRB said, it wasn't a done deal in terms of economics.

Personally? I love the idea of a hovercraft, I think it would work as a tourist attraction too. Although it would probably be better if the ramp was at the Ocean Terminal say, no offence to Seafield but its not very picturesque, not even sure why you'd have the terminus there anyway?

Just had an idea, although its probably too late: Hover trams!! no need for rails although stopping might be an issue...

Pa-broon, Hover trams have already been invented. They are supported by air encased in rubber.
They are called buses.

Well Subrosa, I thought it was a great idea. Brian Soutar is a bit of a maverick maybe but he's been very successful. He's been pretty open about his views.

The council seem to have forgotten what they are there to do. Basically make Edinburgh an even greater place to live an visit whilst listening to the Edinburgh people.

RMcG. A hovercraft would have been very interesting. Sell-able as an experience. It might also have encouraged others to come up with alternatives for using the Forth for commuting and pleasure.

Brighton may well become very interesting in the not too distant future. Let's wait and see.

Yes there would have been further hurdles to be overcome in making the hovercraft idea a reality. Bear in mind Kirkcaldy Council gave it the green light. After all it would have taken people there from Edinburgh and a lot of them would have been tourists.

Given the money involved and the money wasted and still being poured into the trams, it's hard to see anyone from the council claiming the moral high ground on costs.

Gedguy. Thanks for your comment. Like you I would expect Stagecoach to look at at it as a business venture. They are in business to make a profit after all.

The Council may not see it like that however. They have been profiteering at the expense of the Edinburgh people and anyone coming to Edinburgh. Car parking charges, bus fare increases to subsidise the cost of the trams and above inflation increases in all sorts of add on licensing, regulatory service charges etc. etc.

I thought OT was a good place to terminate too but the docks kind of get in the way. Pity though.

I still think for that added extra tang on the morning commute a real hover tram would be more fun.

Pa that's a fabulous picture you're painting there. If two came at once even artics would get blown away. I think you're onto to something.

What if there was a green aspect of the use of hovercraft? The bin lorries could be converted to bin hovvers and the Edinburgh Provost would be taken everywhere in an executive hovver. Now that would impress other Cities. They'd all want one.

I don't really know what to say to your comment Demetrious?

Leith as a termination point for the Hovver service? Granton might work. Small harbour though akthough I think there's a ramp already.

Maybe the hovver could arrive up the ramp and then head along the main road to OT. That would be real fun. And what a tourist attraction!

Just a thought. If the Council thinks it's too expensive and it needs facilities and it's too noisy there is actually a cheaper alternative already available, tested and working really, really well.

When it goes into the water everyone on it has to shout "quack quack"!

What an experince that would be for the wee Fifers commuting of a morning.

Have vague memories as a kid, of trips from Portobello, on ex army ducks , so the idea isn't new.

Would hovercraft have more attraction than trams?

Would any other city want Edinburgh Councillors, at any price?