It's All Over Bar The Photocalls 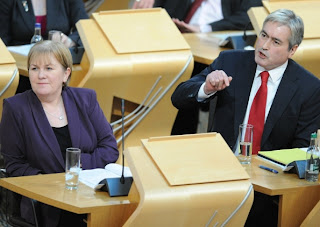 That's it then - all over bar the photocalls. Farewell to Iain Gray (right) and welcome to Johann Lamont (left), the new leader of the Labour party in Scotland.

Later today the results of the never-ending Scottish Labour leadership campaign will be announced, but the Scotsman inadvertently published the result at midnight within the content of its McLeish article.

Henry McLeish does make some sharp observations about the state of his party at present, but it's perhaps too late in the day for Labour to make any substantial changes.  One point with which I disagree is the advice to forget Alex Salmond.   Johann Lamont would be well advised to do the opposite or she may well find Alex Salmond ignoring her and that wouldn't be a particularly pleasant experience.

Once again the ugly side of Labour ballots has reared its head. Their slogan is still 'vote early, vote often' I see. Will they never learn?
Tweet
Posted by subrosa at 09:10

They did very well,; they probably could have let it slip 3 months ago.

Think I remember them – were they a pop group in the 60’s?

So is this a band revival or just a tribute group?

I can't comment on the NNS article as I've been banned from that site for sticking up for Glaswegians who wanted to be called 'Weegies'. C'est la vie.
I sincerely hope that SHE can turn around the misfortunes of the Labour party in Scotland as the SNP needs to have formidable opposition to keep it in check; I can't see this happening with her, though. I can't even see the Labour party, in Scotland, changing course [which it needs to do] and I can only see a change happening if/when independence comes; shame really.

@ Gedguy
Eh! – Ye cannie call a ‘Weegie’ a ‘Weegie’ - I left Glasgow some forty odd years ago, I am and always will be a proud ‘Weegie’.
Gonyersel Gedguy.

Think it may be a tribute group JRB. I don't mean to sound bitchy but so many people in Labour have flat, uninteresting voices. Johann Lamont's no exception.

Your right though, I don't see change happening. Lamont will be beholden to the unions because they put her there.

You're welcome here anytime. Have you registered with Scottish Times? Don't know when that site will get off the ground properly, but it's worth knowing. It's the lad who had problems with the newsnet lot who has set it up.

I am looking forward to the 'Scottish Times'. They have my e-mail address and I hope they will contact me. It's ironic that a site set up to counter the MSM in Scotland bans people for speaking the Scottish language. I didn't know that weegiewarbler was a woman...lol. I'll have to be a little more kind to her, in future.

I feel ashamed standing up for the 'Weegies', being a 'Kettleboiler' myself. I hope that I don't get banned from Dundee as well.

Did you actually get banned for that Gedguy? Deary me indeed. What a crock, people did some pretty serious mocking of the mod who did the initial edit. Totally daft but no one is perfect, it would be a shame not to see any more posts from you on NNS though.

I have to say, I do find the site (NNS) more than a little skittish when it comes to this sort of thing, I know they're trying to present a reasonable debate but sometimes they really need to grow a pair.

On Lamont and her 'victory'. Mmm, no aspiration, no gravitas and no vim so its a big yawn from me. As usual though, she'll get the usual easy ride from the press.

Sadly, I was banned. I think the final straw was when I posted links to 'Weegie' and 'Auld reekie' from wiki to back up my argument. C'est la vie.

She writes good articles for NNS too Gedguy.

I'll be a Kettleboiler then. Jings I'm wondering if that's a compliment. :)

Pa_broon, I don't have a problem with Weegie and it's been used on here long before NNS was a twinkle in someone's eye. Petty I think.

Mind you, 'debate' doesn't really exist on NNS. It's more like an SNP love-in most of the time and that's why I so seldom comment.

As with all nicknames, I suppose, they generally start off as an insult but get adopted as their own. 'Weegie' is not even a nickname; it is more a mispronouncement of the name Glaswegian.
In England you have:
Scouser, Geordie, Cockney and all in between.
My Welsh friend delights in calling herself a 'Covie' [I hope that I have spelt that correctly].
I agree that the NNS is like a SNP love in, but I suspect that is due to the cybernats [another nickname meant as an insult but adopted by those who had been insulted] being able to research their arguments better than the opposition; minus one, being me :-(.

Have been listening to various news broadcasts throughout the day, and naturally Ms Lamont’s leadership success naturally features.

But each newscaster seems to have their own pronunciation of Lamont

Just what is the correct pronunciation of Lamont ?

I've no idea JRB. A lad at primary with me was Lam-ont and I've always pronounced it as such since.

Second best too CH if the papers are anything to go by.

I usually see nicknames as complimentary Gedguy and Weegie I've always thought for affectionate. I live and learn. :)

The problem is the opposition are having difficulties trying to find an argument against independence now that people have stopped listening to the 'better together' mantras.

If you think Weegie is offensive, you should hear what the Weegies call us Edinburgh folk.
Back on topic, it appears the Unions (or as they are euphemistically known, the Affiliates) did not have it all their own way. Their preferred candidate for leader (Lamont) got in, but their man for Deputy (Davidson) failed.
I suspect this wasn't because they had anything against Anas Sarwar, but they made a strategic decision to support an MSP for one position and an MP for the other.
If so, they at least showed some awareness of the interesting situation created by the restructuring of Scottish Labour.
Johann and Anas are now the bosses and can tell Jim Murphy, Gordon Brown, Douglas Alexander, Margaret Curran and the rest of the MPs what to do.
At least that's my understanding of the new regime.

Ah but Edinburghers are aloof from nicknames aren't they Hamish?

I ought to do a post about the deputy being an MP.

Do you think they will tell there pals in Westminster what to do? I think the unions do that and Johann is their voicemail.