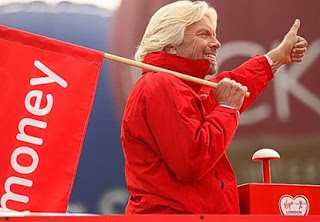 A couple of week's ago Richard Branson, through his Virgin Money business, finally bought Northern Rock for £747m.  He was an original bidder for the bank in 2008 but had a lucky escape when the sale was pulled, allowing him to wait three years to pick up the same business cheaper.

The price he paid is half of the estimated £1.4bn of taxpayer cash that was pumped into the failing mortgage lender in 2008. Subsequently the government divided the business into 'good' and 'bad', with Virgin Money now purchasing the 'good'.  The 'bad' - labelled UK Asset Resolution - holds tens of billions of pounds of securitised mortgages formerly on the books of Northern Rock and another failed mortgage lender, Bradford and Bingley.  It's said it may well take a decade before the exact size of the losses on UK Asset Resolution's books can be quantified.

I don't intend to give an opinion on the sale of Northern Rock as I have no skills in finance other than handling my personal finances, but when I read this, my cynic's hat appeared perched on my head. Perhaps it's because the reputation of bankers is at an all time low, yet none has made the slightest attempt to make good the damage they have done to millions of innocent savers.

Another reason for cynicism is Sir Richard is promoting his new book "Screw Business as Usual" and an off-the-wall comment to journalists would ensure that extra publicity authors crave.

I wish him well should he decide not to focus on profit and also do good in the world. Microfinance may well work here in the UK, but his client group will be somewhat different to those in poorer countries. The system appears to have focused on women in these countries and many companies cnsider the risk of lending to men to be too high.

It will be interesting if Sir Richard does manage to change the face of banking, even in a small way. Only then would he acquire the title 'hero'.
Tweet
Posted by subrosa at 09:22

Well, I hope Santa brings you the presents you asked for when you burned the letter up the chimney. Does the tooth fairy leave you sixpence if you put dentures under your pillow? Dream on SR. Sir Richard has staked very little of his own money, and Private Eye spent years investigating just what a flexible view he has of that. It is very surprising he has been deemed a 'fit person' to have a banking licence.

“I don't intend to give an opinion … as I have no skills in finance” – neither do I, SR, but I cannot help but be drawn to the words of a certain Mr Micawber -

It would appear our Chancellor did not read much Dickens whilst at St Paul’s and then at Oxford.

As for Mr Branson, altruistic as his intentions may be, I am sure he will be keeping a very close eye on the bottom line.

That's true, one of his investors is a US rogue I believe.

Surely it's no surprise he's been deemed fit. That's the way it works these days.

My title was written tongue in cheek. :)

No misery for Sir Richard though JRB, only misery for those of us who pay tax and await for our funds to be returned. Rather like waiting for a train at a bus station.

He is only a hero if you believe that fraud is good because our whole privatised monetary system is built on it.

Built a very good airline against the might of BA's dreadful practices.

Terrible trains though OR.

I was once held up for 2 hours on one of their trains. I eventually went to get a coffee out of sheer boredom.

I was told by the barman that the coffee was free as the delay had been over an hour, but they didn't announce it because they didn't want to encourage people to take it up.

Needless to say I walked back through the train advising people "Coffee on Mr Branson".

Branson...he will hang just as neatly as the rest of the bankers Rosie....and hopefully soon!

He did OR. Although since he's been accepted as one of the elite he's been 'under the whip' I think.

Well done Tris. I applaud you. I'd have done the same but how many would have joined us?

Nominedeus, we can but wait and see. Somehow I think he has his eggs is too many baskets.

Small loans and overdrafts at 18% interest are odious debts for the desperate but cash cows for the banks.

I see nothing 'heroic' in this type of thinking.

I was trying to find the interest rate microfinance companies use. Crinkly. Is that it?

SR -it's the rate being charged by the main banks since 2008.

The microfinance companies charge APR s in the thousands of percentiles and it is legal.

I should make clear the microfinance banks, such as Gameen do not charge exorbitant interest.

It's the bucket shops on salary loans and or loans backed by car valuations who apply exorbitant reates.

Thanks for that Crinkly. I did try to find something accurate but my googling is never great.