Are Our Police Worth It? 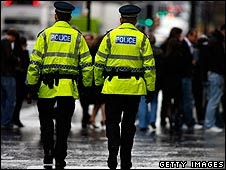 The Taxpayers Alliance say that, on average, nearly 10% of Wales' and England's police authorities' budget is spent on their Chief Executive's salary and pensions.  Isn't that a disgrace, particularly when these authorities aren't properly accountable to the public?

Having gained that information I set about finding how much my police authority - Tayside Police - paid the boss.

The 'best' I could find was this - where pay is evaluated through the Hay System. It shows that the head of the largest police service in Scotland (Strathclyde) commands a salary of £173,994 plus a gold-plated pension.  No problem with their pensions having been raided or their 'perks' having been reduced. The head of Strathclyde's finest receives the second highest salary in the UK police service while my own chief law enforcer receives a mere £130,044.

Comparing police salary grades with the Army, I find the pay in the army is less, but I respect the fact that there are many more brigadiers than heads of divisional police forces. But why should I do such a a comparison?

There has been so much controversy since the Coalition took office about military staff costs yet little has been said about UK police force expenditure.
Does a police commissioner deserve a salary 30% more than an army brigadier? If you have little or no experience of the responsibilities and duties of military officers I don't expect an answer, but let's not ignore the salaries those in the ACPOS award themselves - the 'secret' salaries and secret pensions. The ACPO and ACPOS are 'private' enterprises yet as taxpayers we foot their bills.

I didn't begin this post to negatively criticise the UK police force and in particular the Scottish one, but it does make me wonder about Kenny MacAskill's decision for one police force for Scotland and the staff costs involved. A saving of £130m a year seems a pittance when it also includes the changes to a single national fire and rescue service. As yet I haven't met anyone who believes one police force will provide a equal or better service to the status quo or save public money.

As for ACPOS, surely this secretive organisation will become defunct, or will its title be changed to the Association of the Chief Police Officer of Scotland.
Tweet
Posted by subrosa at 09:22

Sure, senior police people are wildly overpaid, and yes, I'm sure there is loads of waste and overspend in the system, possibly more corruption that we'd like to think, but by and large, seeing as the police force costs less than 1% of GDP, I think it's money well spent. I wouldn't really want to face life without any coppers.

Might be worth a bit more if they weren't so crap.

It is a sad symptom of our times that the salary of those at the top of their chosen career becomes evermore disproportionate to the frontline staff they are supposed to lead and inspire.

There has developed within our society a most unpleasant attitude of ‘I’m all right Jack’ and ‘let the devil take the hindmost.’
This attitude trickles down from those at the top and invades all corners of the workplace, and society in general, like some evil cancer.

I live in London where there is only one police force to look after a population the same as Scotland.
I see no problem with having one force in Scotland.

I wouldn't want to live without a police force either Mark, but the top salaries in the police service reflect the differences between the front line and the top brass.

When is it ever going to stop? Police, local council heid bummers - the list goes on - all receiving salaries and pensions well beyond their worth in many cases.

Even in this outpost, they've become so PC tris. Long story, but believe me, it would have been funny if it hadn't been so tragic.

Gedguy, Scotland occupies a third of the landmass of the UK. London occupies a miniscule amount.

What is concerning people is the local accountability, which they have at present, may be lost.

Time will tell I suppose.

I can see where you are coming from with this article and I don't really disagree with you.
I suspect that AS's hands will be tied when it comes to cutting back on Chief Constables as, I suspect, that their salaries and pensions will have been so tightly secured that it will be impossible for anyone to change that. However, in the future, with having less higher ranks, we may see a saving.
As to the huge amount of high up officers in the armed forces, it is ridiculous that we have a situation where there are more admirals than we have ships and, we have more higher officers than the US army.

It's true about the military Gedguy but promotion is a case of dead man's shoes there and the only way anyone can acquire a pay rise is through promotion.

We need more admirals than ships. Admirals don't only command ships, there are many other duties involved.

It's the same with many army officers, not all are involved in front line deployments. Many work away in the background to ensure the front line operates as expected. Even so there are too many of them but it was a political decision to promote them so politicians must take their share of blame.

I'm ex-army myself but I'm not going to be blind to what is happening in the higher echelons of our military establishment. It is ridiculous that the British have more generals in their army than the USA has, and our army is a tiny fraction of the USA's. The truth is that the 'old boys' network is rampant within the officer corp of the armed forces. This is this lot looking after themselves and ensuring that their 'mates' are ensured a good wage and a good pension when our lads had to but their own body armour. I'm sorry, Subrosa but I don't agree with you. We are top heavy in the military and the sooner we dump them the better for us.
I know that the army [I can only speak about that] needs 10 soldiers behind the lines to keep 1 fighting solder in the line, but that doesn't mean we have to cater for the upper classes to live the life of Reilly while the soldiers on the ground can't get the equipment they need to do the job that we expect of them.

Without the police, men who step in to squelch foul-mouthed little fare dodgers would go unarrested, and we couldn't have that, could we?

Agree completely with the proposition that the high heid yins in the public sector are paid way way too much, but I would not single out Stephen House in Strathclyde's finest as he is actually doing a good job & virtually everyone will tell you that.

JuliaM that is a cheap shot. That footage went global & clearly ''the big man'' as well as the wee student diddy were in breach of the law. What did you expect the polis to do when complaints were made? They reported *both* to the Fiscal & they can deal with it.

''I suspect that AS's hands will be tied when it comes to cutting back on Chief Constables as, I suspect, that their salaries and pensions will have been so tightly secured that it will be impossible for anyone to change that''

Why! They have changed my pension & there are thousands of front line workers who have had their terms & conditions re-written.

Why are the bosses immune?

The old-boys-network isn't only within the officer corp Gedguy, it works with NCOs too.

I agree the top of the army needs to be slimmed down but the fault lies with those who decide recruitment, not those who are recruited.

Maybe brigadier and above live the life of Reilly, but less senior officers don't - especially when they're single. The changes in allowances makes them pay an extraordinary part of their wages in accommodation which can be a small bedsit with shared other amenities. That's after 15 years service.

Policemen with 15 years service get much better accommodation packages.

Then again, ask a soldier if he'd prefer to be a policeman and the majority would say no and the reason has nothing to do with pay.

I singled out Stephen House because he's paid the highest sum Observer. The question of efficiency didn't enter into it.

Yes I know he's highly thought of and years ago, when I knew the heid bummer in Tayside, he was efficient too.

As for the 'big man' issue - I tend to agree with McLetchie who said the fiscal could send a warning letter to both and resolve it that way.

That's what I often wonder - why public services bosses are immune. There are so many chief execs earning money they don't deserve, yet once they're in the system, they can demand what they like. Nobody seems able to stop this although they can stop increases for other public sector employees.

As for the excuse that if such payments weren't made then the employee would rush off into the private sector, that's nonsense as we all know now.

"it works with NCOs too"

I agree with you about the lower ranked officers [it grieves me to come to the defence of them] but my target was the higher ranked ones. We are too top heavy.

"Why are the bosses immune?"

The old boys network, which is riddled with those of a certain male 'club', would ensure that their lot are looked after.
One battle at a time.

Gedguy, I'm sure you're aware many of today's junior /middle ranking officers are highly qualified in specific areas but choose to have a career in the military rather than in private industry.

Of course, with the changes announced this year, those same officers are reconsidering their positions because most could achieve salaries several times more if they left for private companies. I know of a few resignations already given. Such a shame because they are the future of the army and it needs their skills.

I agree though that the higher ranks must be trimmed. A brigadier (retired) I know said it's too much a case of dead mens' shoes and now the 'good' younger ones are leaving, it will be worse at the top in a decade's time.