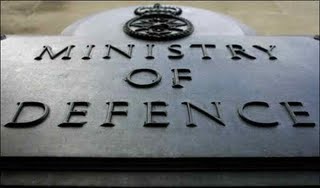 The end of another year of needless deaths brings the announcement from the Ministry of Defence that a soldier, from the 1st Battalion the Yorkshire Regiment, was killed in action in Afghanistan yesterday.

He was a member of an International Security Assistance Force foot patrol when he was caught in a blast from an IED.

394 of our troops have now died in the Afghanistan war and the numbers of civilian casualties are allegedly in the tens of thousands.

I would dearly like to think the deaths have not been in vain, however only history will tell the true story - eventually.

May his family and friends support one another. There's too little love in the world.
Tweet
Posted by subrosa at 14:38

There's not too little love, Subrosa, there's too much stupidity at the top.

You may be right OR, but I don't think the top are stupid. I think they're chancers and other names I'd rather not type.

It's not only sad that another British soldier has lost his life in a futile war but there is also the countless civilians who are at the mercy of both sides in this conflict.
It's not right.

No it's not right Gedguy, it's very wrong.