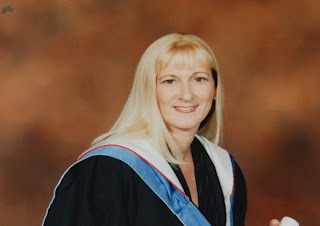 Alison Hume was only 44 years old when she was left for hours, by Strathclyde Fire and Rescue Services, injured at the bottom of a mineshaft.

She was taking a shortcut home through a field behind her house when she stepped on the cover of the disused mineshaft and fell 45ft. Her daughter raised the alarm and the local fire and rescue services arrived.  One fireman was lowered down to Mrs Hume (and stayed with her for more than four hours) and another paramedic was strapped up in a harness ready to follow when another senior officer arrived at the scene and insisted they wait for a police mountain rescue team to arrive. They arrived eight hours later. 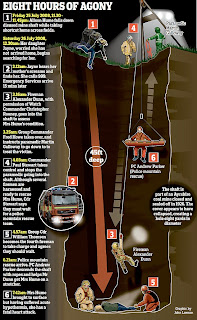 click to enlarge
The behaviour of senior officers was condemned by a judge this week: "I found their evidence bullish, if not arrogant, in their determination to justify the subservience of the need to carry out a rescue to the need to fulfil to the letter... brigade policy".

A woman died unnecessarily because of senior officers at the scene cited 'health and safety concerns' and insisted that winching equipment was for the use of staff only.  If Mrs Hume had been removed from the shaft earlier she may well have survived, but she died from a heart attack brought on by hypothermia.

One of the officers involved in stopping the rescue, Paul Stewart, is still in the service and awaiting promotion to divisional commander.

Scotland's First Minister, Alex Salmond, said at FMQs this week that he had ordered a fresh enquiry into the incident.  All the family of Mrs Hume can do is hope that those guilty of contributing to the death of the mother of two are again clearly identified and if Paul Stewart is one of them, he should be sacked for gross incompetence.

We spend a great deal of money providing the fire service with the most modern equipment and training facilities in the western world and are content to donate to other countries. Hopefully the Palestinians are free of arrogants senior officers.

I cannot help but be struck by the fact that this is yet another example of the ever burgeoning growth of the ‘jobs-worth’ mentality.

Once again officials who clearly display a simple lack of common sense or basic humanity use Health & Safety; Data Protection; Anti-Terrorist Laws; or whatever piece of legislation to hide their own inadequacies.

Too often these officials try to hide behind the rigid application of policies, procedures and protocol – all the while forgetting about – people.

What distresses me about this JRB is the likes of Paul Stewart who will receive a pension most of us could only dream about and no reprimand.

If this happened in the military the people who acted irresponsibly would be sacked immediately and pensions questioned. Gross misconduct would be on their discharge papers.

There were two similar cases in ENgland, involving Police Forces.

One was a PCSO who would not go into a pond after a child because "he had not had the necessary training".


The other concerned police at an accident scene where a passenger had ended up in a deep ditch which the officers were told not to enter. Whilst the ditch was deep and the sides steep,it turned out that the water was only 2 ft or so deep. Theo the passenger was left in it face down to drown.

But you can see what the police are up against from the Health & Safety brigade.

A London policeman fell through a skylight whilst chasing villains over a roof. The HSE took the police to court because they had not done a risk assessment before the man was allowed to climb on the roof. I recall that the total cost of the case reached £2 million before it was dropped.

'twas ever thus sadly. The woman presiding over the Mid-Staffs Morgue left with a seven figure pay off. Another involved in it is now head of the Care Quality Commission. Sadly, irony did not die with the award of the Nobel Peace Prize to Henry Kissinger, but is alive in kicking in the British public services, where reward for failure is a cornerstone of the whole edifice.

Perhaps the real blame for the tragedy lies at the door of the Ambulance-Chasing legal profession which encourages anyone and everyone to 'sue' at the slightest excuse.

“Rules are for the obedience of fools and the guidance of wise men.”

Depressing and despicable lack of moral fibre. That one of these clowns is up for promotion beggars belief. Typical of the decline of Western culture.

So long as the guidelines have been followed to the letter then no one is to blame although lessons can be learnt. Hence the Governor of a prison from where IRA prisoners escaped using a smuggled-in pistol moved up to manage a immigration detention centre that burned down and finally headed the UKBF according to wikipedia.

I remember those Edward and do appreciate what our services are up against with the H & S jobsworths.

Also you've reminded me about the skylight incident. What a waste of money. How do we control such waste?

Weren't the Care Commission found guilty of fraudulently doubling actual care home visits the other week Elby? Of course there will be no action taken against anyone.

That may be her parents next move Demetrius.

It is OR, yes indeed.