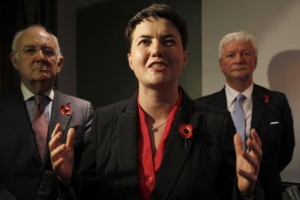 Ruth Davidson is the new leader of the Scottish Conservative and Unionist Party.  She beat off her rival, Murdo Fraser, by 566 votes and certainly surprised some who voted in this poll.

Ms Davidson was reported as being the favoured candidate of the Westminster Tory leadership, although she only managed to acquire the support of two MSPs - in contrast to Murdo Fraser who garnered support from seven of his parliamentary colleagues.

The only tory MP in Scotland, David Mundell, who avidly supported Ms Davidson at every opportunity, said:

“I’m delighted with the result. Clearly the members want change.
“Ruth is a dynamic young human being who’s not a stereotypical Tory. She’s not a toff for example.
The members want change?  Maybe, but they'll certainly not get it with Ruth Davidson in charge.  By electing Ms Davidson they know there will be no change. During her campaign she was articulate and quick witted but she offered little other than a 'fresh face' to the near demise of her party.

Is David Mundell, with his 'not a toff' remark, suggesting Annabel Goldie and previous tory leaders were toffs? Ruth Davidson may not be a toff in David Mundell's eyes but when I discovered she'd used - and presumably paid for - one of Edinburgh's elite restaurants to make her first leader's speech on Friday, I was convinced she's toffier than 90% of the Scottish population.

I've attending meetings where Murdo Fraser has been speaking and he's certainly not a toff. He may have the character of a plodding politician but he is aware that many of his grassroots supporters now vote SNP.  Why?  Because they want change; mainly in the form of separation from London.

The only hope for the Scottish tories was Murdo Fraser's intention of creating a new party. Many would say he was foolish to expose his thinking during the campaign and if he'd stuck with the 'party line' he would have been a shoo-in.  However, he disagrees and insists 'the principle was everything'.  Will Murdo Fraser be encouraged to break away and establish his own right of centre party?  He really has nothing to lose because SCUP will continue slowly dying and he would have time to establish his party before the next Holyrood elections. I don't know the man well enough to suggest that he would have the courage to do so, but I do know that many tories in this area, who now vote SNP, would be anxious to support him.

The tories missed a trick not electing Murdo Fraser. Not only was he the hope of Scottish centre-right voters but he was the only candidate who would have brought back SNP-voting tories to the fold, so the SNP will be very content with the result. His ideas were radical but seemingly too radical for over half of the two-thirds of members who voted.  With fully half of the tory Holyrood group backing him he may surprise the Scottish political scene yet.

(The photograph is from the Herald.  It's rather too evangelical for my tastes).

Tory members usually choose the wrong leader - they're building quite a track record.

Well – there you have it - a wee lassie who only entered politics some two years ago is now going to reverse the rigor mortis that has afflicted the Scottish Tories for almost a generation. Aye Right.

This is the same Ms Davidson, who entered Holyrood as a ‘List’ MSP as far back as May 2011, only having been selected after the Tories’ first-choice candidate was forced to stand down over questionable finances.
This is the same Ms Davidson, who after almost seven gruelling months as an MSP has emerged in November 2011 with such extensive political experience and insight as to be the best candidate to lead the Scottish Tories.

Oh, I’m sure the wee lassie will do just fine – for a month or two maybe – or until the Scottish Tories, youthful leader or not, realise that for them, perhaps rigor mortis really is terminal.

"I think this fresh faced young chap is just what we Tories need, ex Terrior, kickboxer, all excellent stuff.

I wouldn't say building is an appropriate description John Page. :) However you're right.

Why the tories put themselves up for a fall by electing the inexperienced never ceases to amaze me JRB. It was the same with Cameron if I remember.

Mind you, the decision will please the SNP. If Murdo had won then he could well have taken many natural tory voters away from the SNP.

Colonel, didn't we meet the other week?

Much ado about nothings.

I don't think so Crinkly. It's the future of the centre-right at stake and Scotland needs a strong opposition from that area.

The Scottish Conservatives are run by a spook, reportedly.

Ruth Davidson was supported by that spook, reportedly.

Was the vote rigged?

Your comment Ms Davidson is an ex BBC employee hits the nail on the head. She fits the BBC profile of Left leaning and Pro EU. She's obviously taking the Scottish Tories in a new direction and into the mix of other Left Leaning Pro EU parties here in Scotland and so will soon to be lost in the mix. That narrows the choice for any Centre Right voters still here in Scotland. UKIP's now the only choice.

There is an interesting little post script in today’s papers…

Paul McBride QC, Conservative party sponsor and former justice adviser to the Conservatives has resigned from the party, describing the new and youthfully invigorated party as – “a bunch of unreconstructed morons” and “no friends of the people of Scotland”

Looks like Ms Davidson’s reign has lasted all of two days before she is left presiding over an implosion within the Scottish Tories.

SR -read the comment again -the (s) denotes an intention to personalise.

Good question Angirfan to which I have no answer.

You're right Peter, it would seem UKip is the only answer right now.

JRB I've just finished a post on that very subject. :)

Rosie, you're dead right. It just shows how far the SCUP would go NOT to embrace change when they voted for a lesbian in a relationship with another woman she wants to marry. Not that that matters to me, but it sure as hell does to the blue rinse brigade in the Tories.

DL I don't think her sexuality has anything to do with it. It's her inexperience and lack of solid policies it seems.

However, all good news for the SNP.