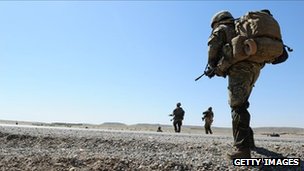 A soldier became the fourth British serviceman to be killed by a Taliban bomb in Afghanistan yesterday.

The infantryman, from the 1st Battalion The Princess of Wales's Royal Regiment, died following the explosion while he was on foot patrol in the Jamai Kowi area of the Nahr-e Saraj district of Central Helmand.

His family has been informed according to the Ministry of Defence and his death brings the number of British service personnel killed since war began in Afghanistan to 389.

May he rest in peace.
Tweet
Posted by subrosa at 06:56