Ofgem And The National Grid 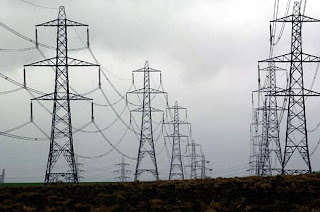 Next month Ofgem are due to publish a consultation document which will show the cost of feeding the north of Scotland's renewable energy into the national power grid could fall by 80%.  The costs are estimated in a draft pricing and investment model.

The draft report shows how the cost per kilowatt in the north and north-west of Scotland would fall from £24 to less than £5 if the cost of accessing the grid was equally spread.  If it was equalised not to support renewable power but new build gas-powered electricity generation, the unit cost would be £12 throughout Britain.  Sounds good so far.

One of my readers, Joe Public, brought this to my attention and sent me his comments:


My own view about the Ofgem report is that there's a lot of political pressure being exerted.
It's all very well for the powers-that-be (no pun intended) to complain about Access Charges to be £24/kW for generation from the north of Scotland, but they conveniently ignore the fact that those points of generation are very distant from the actual 'average' market.
1. It's only right & fair that Transmission Costs (distance-related) apply. Electricity (unlike Natural Gas from the North Sea) is not very efficient to transmit over distance. Therefore the Access Charge for electricity generated much closer to the point of demand must be far lower.
2. Unreliable power sources such as wind & solar need virtually 100% conventional power generation as back-up.
No-one, anywhere in Scotland, would depend upon wind or solar to power a hospital, because it has zero critical dependency.
3. The emotive statement in the Beeb's article "Sharing the costs equally across the UK would remove the financial incentives to build any new nuclear power stations, and shift a projected £17bn of nuclear investment to other technologies." really means getting every electricity-user (pensioners & those on the bread-line included) in the UK to further subsidise those investors already receiving massive feed-in tariffs for what electricity they generate. [And in some cases electricity generated for which there's no immediate demand.]
4. The Beeb's article seems to imply its an either/or scenario - (nice, green, clean) wind +solar vs (nasty, polluting) nuclear. Conveniently ignoring the fact that only the latter is 24/7/365 reliable.
Joe isn't pro-nuclear but he's aware we need power to be dependable and affordable. If Scotland is to be the 'renewable power house of Europe' then we have much to do to achieve a reasonable balance between price and reliability.

"Joe isn't pro-nuclear but he's aware we need power to be dependable and affordable."

And not just Scotland. In England I'm seeing my bills soar due to the ruinous policy of trying to force green technology on us to the detriment of efficient energy supply.

1/ Slightly misleading as we in Scotland pay a flat £24.00 no matter what the generation is or how close or far it is to end user. Whereas SE England gets subsidised £6 for all of its electricity use.

More significant than the life in calendars years is the lifetime energy production of a reactor. A few reactors may have achieved a lifetime production equivalent to about 24 full-power years.

Sorry FE, I should have included England too.

I don't see where it's misleading CH as £24 is stated as being the going rate.

What's the lifetime of a wind turbine?

SB the £24 is the wrong way round as the SE is importing the power they should pay not the supplier end.

I believe 20 years + but I have nothing to justify that only this one is 446 years now if we averaged that :)

As far as I can gather that's about right, between 20-25 years max.

If only ours were so architecturally aesthetic. :)

Cynical Highlander - thanks for the link. All proponent of nuclear power would be well advised to read it.

Joe; with reference to your concerns it seems to me the fault lies more with failings of the grid and a lack of joined up thinking in the administration of energy policy than any gift horse to producers.

Paying a supplier nine times more than his products price for not supplying it, is adding insult to idiocy.

As to the balance between supply and demand? Well that comes down to who needs it most - the supplier with an infinite resource or the consumer with an insatiable demand?

Rosie,
How would Scottish independence affect the pricing structure? English consumers, given a choice, would prefer to have cheaper electricity than subsidise a foreign country's supply network. Electricity is already imported from France and the Netherlands when required.

Except when Scotland is calm but UK east coast offshore windmills are turning the cost will be the other way. When the whole UK is calm imported French nuclear power comes in from the south. So should the Scots pay more in those situations?
The grid is a multi way system and is equally essential for all users, it makes sense to share the cost equally, it's not a one way supply route.

"SB the £24 is the wrong way round as the SE is importing the power they should pay not the supplier end."

On the contrary, the SE can import its energy from either the French (often closer, so less transmission losses, so more efficient & because a significant proportion is Nuclear, it's 24/7), or, from the North.

Green generation is after-all, a political, not market-driven or engineering-driven decision. [That's why such enormous subsidies are paid.]

'Green' energy created in the north of Scotland, can only really find a market southwards.

In return for the cheaper, reliable Nuclear French energy, the SE is however, at considerably greater risk should a Fukushima-type incident befall our continental brothers. [And even if the SE didn't buy that nuclear output, it still endures the same risk.]

We can go back and forth so I did Uswitch!

If we stopped fannying about with political decisions, religious attachment to "green" nonsense, and subsidies to whoever lobbies the loudest (in which I include the Global Warmist fanatics), and just charge everyone what it actually costs, we could stop having these arguments and be sure that we were getting the best deal.

Oh, and as a by-product, all windmill building would cease forthwith. Result!

I don't know Brian. The BBC article is based on a devolved UK.

There has been talk of link up with Northern Ireland and Norway but that would take years and no infrastructure is in the planning.

Doesn't Scotland already manage to power itself Woodsy? Why else would it be exporting?

Jings WY, we couldn't do that! What about the middlemen?