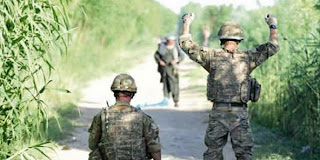 The good news: The last Marines from Arbroath's 45 Commando have arrived home safely after a six month tour in Afghanistan, without a single fatality, although 13 Marines from RM Condor have died in deployments to Afghanistan since 2006.

There will be hundreds of families and friends breathing a sigh of relief at the arrival of their loved ones on Scottish soil.

Soon Arbroath will no longer be home to 45 Commando. Liam Fox announced in July that about 1,000 are to be relocated, within the next five years, to the West Country as part of his wide-ranging shake up of the UK's military.

For every seriously injured serviceman or woman flown back to Britain there is at least one unpaid carer.

There are currently more than six million carers (including those tending to military and ex-military personnel) in the UK - 11% of the population.

The bad news: A 24-hour help line run by the Soldiers, Sailors, Airmen and Families Association (SSAFA) has had its £330,000 funding axed and that means it must close at weekends and in the evenings.  The MoD said: "The number of calls is declining and to ensure value for money the contract won't be renewed."

Surely we, as a compassionate people, can afford £330,000 to ensure that those who serve/served in our military have immediate access to help. Despite the MoD's protests that cuts must be made, it's disgraceful that the state owned RBS will be boosting their employees' pay by around £500m in bonuses.

Who is to blame for this situation?  Politicians.  It was their decision to send our military to Afghanistan and also their decision to bail out RBS and Lloyds.  The bankers are mocking the population.  When will we realise that?  Such a pity those occupying the steps of St Paul's haven't a strong message about that.
Tweet
Posted by subrosa at 19:43