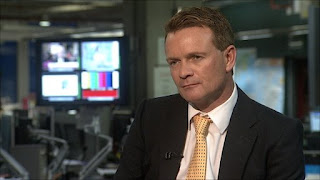 Yesterday I was slightly surprised Paul McBride didn't appear on the Politics Show, but having the new Scottish leader of the Scottish Conservative and Unionist Party - she insists upon the full title - as a guest, then it's perhaps as well Mr McBride wasn't invited.

Paul McBride QC was the youngest person ever to be appointed to the Queens Council at the age of 35. He is no shrinking violet, but which QC is?  They're all performers with a intricate knowledge of the law, but without Equity cards. His legal career is as colourful as his political opinions and he's a man I think I may enjoy having to dinner, mainly because he's unafraid to change his political thinking.  Unfortunately I doubt if I could persuade him that Scotland should be an independent country, but the discussion would be vibrant.  I dream.

Mr McBride, who appears to have always held strong political views was a lifelong member of the Labour party until he decided, in 2009, after growing sick of seeing his former clients shopping on the high street when they were supposed to be locked up, he would join SCUP. His reason was that they were 'the only party serious about tackling the Scottish justice system'.

He was adopted as justice adviser to the ex-leader Annabel Goldie and now, hours after the tories have elected a new leader, he's resigned.  He said he quit over the tories' opposition to anti-sectarian and minimum pricing laws, yet I feel that's not all.  Resigning within hours of the election of Ruth Davidson must be a a blow to her and her henchmen.

“It had nothing to do with Ruth winning. I resigned over their performance on criminal justice, in particular their approach to the Offensive Behaviour Bill.
“They are the most moronic, dysfunctional, introspective bunch of MSPs I’ve ever seen.
“They have no interest in the people of Scotland. Their only interest is their careers."
Oh dear, not an positive endorsement of the new leadership.  I wouldn't dare to suggest Mr McBride has little time for the new leader Ruth Davidson.

He says he will not join another political party. Good for him.  Nobody needs to be a member of a political party and his decision will allow him to act on the political stage without having to toe the party line. Welcome to those of independent thought Mr McBride.

Meantime, Ms Davidson is off to London today to be congratulated by her boss colleague David Cameron on a job well done. She must keep him on side as finances are short in SCUP and CallMeDave will be writing the cheques for their anti-referendum campaign.

I wonder how much longer it will be before other Tories join Mr McBride and turn their backs on this party.

Ms Davidson’s youthful and somewhat brusque ‘in your face’ style of politics does not seem to sit well with the more mature and traditional conservative party activist.

I would be interested to know how her comments re Mr Cameron go down south of the border.
She is reported as having said –
“While David Cameron is my prime minister, when he comes to Scotland he's not my boss - we're colleagues." – so is he her boss when she goes to England?
“If he [Mr Cameron] needs a quiet tap on the shoulder, then I'm just the girl to do it." - Cameron might take such talk from Sarkozy, but will he from Ms Davidson?

Either at your throat or your feet .... no thank you. If you are parting company, do it with some dignity despite your inner feelings.
We have a steady influx to the ideal of Independence without the need for self-publicists and fair weather friends.
The expression on Mr Mundell's face during Miss Davidson's acceptance 'speech' when she referred to Mr Cameron as her "colleague" not her "boss" was one of profound shock - good luck with that one Miss Davidson.

I'm sceptical about the political convictions of anyone who moves from Labour to Conservative (or vice versa) and then quits in a huff after a couple of years (timing the resignation for maximum personal publicity).

I also think his language is utterly unacceptable from someone in his position and perhaps he is using his position to stop people challenging him. A classic bully.

I think he's grown to love the limelight over the last year and seems to be something of an attention seeker. We now find him offering opinions in the media on matters which, on the face of it, do not appear to have anything to do with him in a personal or professional capacity.

If I was Ruth Davidson, I wouldn't be losing sleep over this guy.

I'm not even sure why he's given the air time, after all, who is he anyway?

Despite not admitting it, he obviously believes having Ruth as the new tory leader is several rungs short of fan-dabi-dozi.

I would agree, except I'm no Tory so I think its quite good, indeed, I could crush a grape.

JRB, I should think quite a few tories will continue to vote SNP rather than a dying party. At least one third of them. :)

I don't think McBride does dignity Clarinda. Remember he's a defence lawyer and they are a breed apart here in Scotland. He enjoys the limelight, but I think his star is fading now because, like you, many will resent this outburst.

I'm with you on this one William. From Labour to Tory is too big a leap for me to understand anyone's opinions moving so far.

She may not lose sleep over him, but it's the ones who will keep a silent counsel she has to fear.

All grist to the independence mill pa_broon. I crushed a garlic clove. :)

I am surprised by your surprise over Mr McBrides jump from Labour to the Torys.

Given that there is virtually no difference between them since John Smith died it was hardly a great leap.

Rosie,
Off topic, but, as Mrs Merton might say, I wonder what prompted Alec Salmond to contact a £161 million lottery winner who had helped produce SNP party political broadcasts over twenty years ago? ;-)

It might have had something to do with the fact that the couple in question were life members of the SNP.

Twenty years ago there were few who could produce videos Brian. I wasn't one of them and those who were so skilled were much appreciated. Hence Alex's letter. :)

Dubbie, I'm stuck in a timewarp at times. Yes I find a leap from labour to the tories extreme but you're right, they're all the same these days.

He wrote a letter because he knew his old friends would make a rather nice contribution. As they did. And good on them for continuing to support their beliefs.

I do hope it all comes to fruition Jeanne. Such a donation will make a tremendous difference to their campaign.