Are Our MSPs Work-shy? 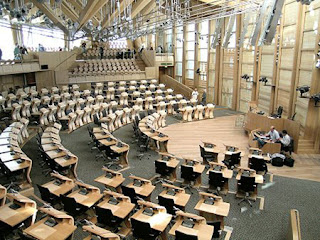 According to today's Express, Scotland's MSPs are work-shy- a generalisation possibly quite unfair to the majority.

Tricia Marwick, the parliament's Presiding Officer, wants to expand the hours parliamentarians are present in Holyrood.  Currently they are only required to be there one and a half days a week.  Debates are held on Wednesday afternoons and Thursdays, with committee members also required at Holyrood every second Tuesday. Sessions are always completed by 5pm and there are no late night debates.

Mrs Marwick proposes a change to debates on Tuesday, Wednesday and Thursday afternoons with committees held in the mornings.

Neil Findlay, a Lothians Labour MSP, wants the status quo to be retained because his work hours are already excessive.  He's been forced to pay for a hotel room in Edinburgh four times in the past seven months after attending late-night functions. He sounds a bit of a whinger and could do with being seconded to an army colonel - who receives roughly the same salary - for a week or two.

In large organisations there are always individuals who are more skilled at 'being busy doing nothing' than their colleagues. Going back some years, I can recall a senior of mine who contributed nothing to the business, but he was beyond reproach because, as I later discovered, he was related to the managing director.  Give the man his due his attendance was perfect, his appearance referred to as 'dapper' and he had a genuinely happy persona. He perfected the art of wandering round the building always carrying bundles of documents and conversing with anyone he happened to meet. His job title was 'project manager' but no projects were ever produced.

Therefore, being 'at the office' will not ensure MSPs are any more productive than they are now, although I'm sure that few spend three and a half days in their constituencies meeting their electorate.

Where improvement could be made, even though it's superficial, is in the number of MSPs who attend debates in the Chamber. For the majority of debates there are often less than 10 politicians present and as these events are broadcast, the emptiness conveys an apathy to the viewer. Perhaps a ruling insisting 50% of MSPs attend each debate may inject some vitality into these proceedings.

The proposals will be discussed by the Standards Committee on Tuesday while on Thursday, Mark Griffin's question (number 12), 'to ask the Scottish Executive what plans it has to consult on introducing a ban on smoking in cars carrying children' will be answered. Two broadcasts I'll be closely observing.

Note: I wonder if Alex Salmond's relative will send him a copy of her latest book for in time for Christmas.
Tweet
Posted by subrosa at 09:25

Our (admittedly, Westminster) MP certainly puts the hours in.

His Parliamentary work is but a fraction of his constituency work.

"Neil Findlay......sounds a bit of a whinger and could do with being seconded to an army colonel - who receives roughly the same salary - for a week or two."

I'd rather see him seconded to a Helmund-based, front-line squaddie for whom there's no Edinburgh hotel room available after a patrol gets delayed.

… all this for a couple of days a week.

Nice work if you can get it.

There is an easy solution
… put them all on hourly piece work, if they turn up for debates, committees, constituency work, then they get paid for time they are there.
… out on a nice little ‘jolly’, a round of golf or doing some shopping on Princes St, then they don’t get paid.

How can there be enough constituency work for MSPs if it is shared with Scottish MPs (or vice versa)? Are Scottish Councils and government departments really twice as inefficient as their English counterparts to require extra elected representatives to sort problems out for their constituents?

The expenses (or allowance) system should be brought in line with the rest of the public sector in Scotland.

I don't get anything like the amount they do for overnight stuff. I get £5 for lunch, £15 for dinner, the hotel is the cheapest they can find short of putting us in a flea pit although that is very manager-dependent; some are a heck of a lot tighter than others. Our mielage allowance is 48p so that is in line I suppose.

On the difference between MSP's and MP's, for local issues the MSP gets my vote everytime, they just seem to be more plugged in to local issues than the MPs do.

Although again, that depends on who you've got.

My MSP puts the hours in Joe but that doesn't mean all do.

Aye I made an error using that comparison.

JRB, as I said to Joe I made an error using a colonel's salary as a comparison. The military overnight allowance is far below an MSPs and these days they receive no family travel allowance but two journeys a year for their next of kin - not involving children of course.

I'd agree with that. They should keep timesheets and then we would know how much time was spent on parliamentary business and party business.

Excellent point Brian and one which should be used by independence supporters. Of course that's why unionists are so against independence - they'd be jobless.

Of course it should pa_broon and I was hopeful that would be the case when I voted for devolution. However our newly elected politicians showed little regard of their electorate when they decided these expenses.

Is it any wonder I have little faith in politicians?

My MSP is great. My list MSP(s) I don't know at all and I've never had any communication from them. They appear to be admin rather than active.

Just confirms my opinion that Parliamentary democracy is obsolete.
Roll on the real thing after independence. I'll be founding the Guy McFawkes party if nobody else does.
In the meantime, some excellent points made by earlier commenters.
In particular Brian's comment about constituency workload.
I guess most of us here know the solution. It's as simple as the solution to the West Lothian question. Only Tam of the Binns hasn't worked out the answer.

I'd join up Hamish. Such a shame the SP hasn't taken the opportunity to be a people's parliament where debate should go on every day of the week.