The Answer Lies With The Politicians 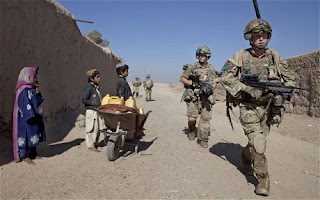 Yesterday, two British soldiers were killed when their armoured vehicle struck a makeshift bomb in Afghanistan.

Both men belonged to the 1st The Queen's Dragoon Guards and had been providing security in the Yakchai region of Nahr-e Saraj when they were caught in the explosion. They were serving with the Formation Reconnaissance Squadron.

One soldier was named as Lance Corporal Peter Eustace, aged 25, from Liverpool. The other soldier is expected to be named later today.

The deaths take the number of British troops who have died since the war began in 2001 to 388.

How many more families, both military and civilian, will suffer the torment grief bestows?  The answer lies with politicians.
Tweet
Posted by subrosa at 09:10

These deaths were barely whispered across our MSM. They ought to be ashamed of themselves. Too busy slavering over the EU debacle.

It's so sad, Subrosa, that many of these poor young fellows enter the military because they have no other job prospects.

If only the youth knew that Kissinger referred to them as "dumb, stupid animals"; they might not be so keen to join up to the perpetual war machine.

I didn't see mention of them last night OR. It was my MOD pal who informed me.

Highland Cooncil, 'If there is hope... it lies in the proles' - George Orwell.

It is sad Fausty but it shows these youngsters are willing to work and they join for different reasons. For some the military is like the family they never had. That's even sadder to me.

Sadly, our armed forces in Afghanistan are little-more than simple moving targets.

As with all their Invader-predecessors, they will leave no beneficial political legacy in that country.

Joe many are poor souls: they're sacrificial lambs many of them without an understanding of today's politicians' like for war.

Trouble is Subrosa most of the politicians do not know what is going on in the world just now re the wars and the financial meltdown and even if they did they would not care as they are only there for the position and the money - The politicians who do know what is going on are in the pay of the real people who run things - the bankers and others who run the global companies who are responsible for all this.

The people need to wake up and get rid of these crooks and this system before it gets rid of them.

The politicians input to the 'Big Society' is first to create the circumstances that make it necessary, then to hope to exploit it by removing themselves from further responsibility; then to make decisions that diminish the amount of individuals who can take part in it!

I'm afraid, as much as I would like to agree, that I can't. The answer does not lie with politicians.

We are the ones who allow it.

The problem is we still vote these people in Billy. We still believe, or want to believe, they mean what they say.

War is a money spinner for a few and the few are usually pally with politicians.

Aye Crinkly. I saw a snippet of Cameron with some women who were showing him their contribution towards the Big Society and thought it was a purely a photo shoot event.

To a point Jeanne. We like to believe politicians when they say they will withdraw troops but of course they lie. Just how do we ensure the politicians we elect stick to their word - other than wait another 4/5 years for the next election?

Rosie,
The answer lies in filling the gap between democracy and accountability: we can begin to vote according to results achieved instead of tribal affiliation. Or we could demand that we the voters vote on individual policies instead of the bundles proferrred by the establishment approved parties. But the parties won't agree because that would require them to give up power which is why politicians enter the fray.

I wonder, if politicians stood without any party affiliation being known, only policies, how that would work. Of course it wouldn't because parties are power.