What Constitutes A 'Good Victim'? 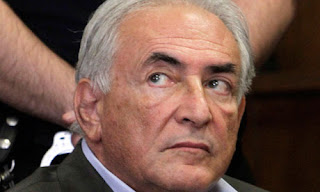 It's not my intention to analyse the case of Dominique Strauss-Kahn who was accused of attempting to rape a hotel maid Nafissatou Diallo, although given the events since his arrest, it's little wonder the conspiracy theories have been numerous.

This week the case against him collapsed when his legal team filed papers stating: 'The nature and number of the complainant's falsehoods leave us unable to credit her version of events beyond a reasonable doubt, whatever the truth may be about the encounter between the complainant and the defendant.


'If we do not believe her beyond a reasonable doubt, we cannot ask a jury to do so.'

Ms Diallo's lawyer attacked the decision but was told by the that she had repeatedly lied to the defence.  Initially the DA Cyrus Vance had supported Ms Diallo, calling her statement 'a compelling and unwavering story' which appeared to be backed by forensic evidence but Strauss-Kahn's defence lawyers said Vance had been too quick to bring charges and 'rushed ahead to indict him when they didn't have to'.

Pierre Hourcade, a French attorney who also practices law in New York said, 'Dismissal does not mean he is innocent, simply that the district attorney doesn't believe the case can go to trial.'

What constitutes a good victim?  Surely the woman should have the right to have her case heard in front of her peers regardless of unrelated issues.

Could the 'good victim' epithet become an essential part of criminal cases here?   Sadly in the Chan family (see John Brown Cafe 2) the victim is dead.  He was murdered. The police and Crown Office refuse to have a public enquiry.  Unfortunately for Mr Chan's parents even the murder of their son doesn't make him a good victim.

In America, you can forget justice; you can forget the constitution; for, to put it bluntly and simply – money talks.
DSK, his international supporters and top-flight legal team easily out bank-rolled the perhaps less sophisticated and less savvy Ms Diallo.


In Edinburgh, you can forget justice; you can (for now) forget the Scottish legal system; for, to put it bluntly and simply - the establishment talks.
The well worn platitudes of DCC Steve Allen - “taken steps to review its management of critical incidents” and “was refreshing guidance and training given to all officers” – have but a hollow ring to them. Similarly, the Crown Office have been off-hand and dismissive of the events surrounding this case.

Let us just hope that Christine Grahame MSP, convener of the Scottish Government's Justice Committee, can extract an explanation of all that has (or has not) happened from the Lord Advocate

In London, it seems you get 6 months for a trivial offence of taking a few bottles of water from an already looted shop during a riot, if you are poor and ordinary and have no connections.

You get 4 months for lying and defrauding the country out of tens of thousands of pounds if you're an easy touch, drunken sot that no-one likes.. but for all that a member of their parliament.

You get off with an apology to colleagues who have stolen as much, if not more than you if you are a Secretary of State.

You get off completely free if you are Gordon Brown.

And if you were on the Tory front bench, you may well be rewarded with a cabinet position...although who exactly would want that is a mystery to me.

The richer and more influential you are, the better deal you get in justice.


Mr S-K was always going to get off with it. he was rich and powerful and white (even if he was French), she was black, female, an immigrant and not particularly attractive. Fluttering her eyelashes at the judge wasn't going to work.

I was surprised he was arrested in the first place JRB.

As for our own justice system, it requires a deep clean.

I do admire Christine Grahame as she appears to be the only senior MSP willing to tackle such issues.

Tris, labour and the libdems are just as bad as the tories. They're all in it together remember.

There more to it than that I think Tris. Maybe I've been reading too many conspiracy theories.

I suppose the best victum is the best liar at these from a judicial point of view or else with the best crew of lawyers or advocvates creating good stories for the benefit of the jury and the press...

Yes SR, I was saying that it was dependent on wealth and position rather than political colour. As I indicated, a Labour MP only got 4 months for stealing tens of thousands of pounds; a Labour Cabinet minister got off with an apology after stealing hundreds of thousands of pounds, some of it for porn, and a Labour prime minister got away completely despite the fact that we built or refurbished such things as summer houses, because, apparently that was where he worked (It makes you wonder why we gave him No 10 AND a country estate, if he was going to work in his greenhouse, doesn't it?) Then we paid for his cleaner, and his brother's cleaner... and he couldn't sort out his expenses and separate that cost...despite being the bloody finance secretary for 10 years...

It was only the last line that mentioned the fact that the Cons were as bad.

I certainly wasn't indicating that Labour weren't every bit as bad. But I'd kinda forgotten the Liberals exist. In England they have become Tories and in Scotland they have disappeared altogether. I only remember them when someone sprays them with blue pain and makes them stand out.

I'd be interested in hearing another possibility on the DK story though, SR. Without wanting to sound like a smartarse, I knew from day one that they wouldn't make it stick. Rich important white man v poor black woman = obvious result to my mind.

Yes stranger. As Tris has said money buys influence and SK has plenty of the former.

Tris, the libdems don't appear to matter to many either here or in England, but unfortunately they have a great deal of power at present. They're using it against the will of the people too and creating as much damage as Brown and co.

DSK had to be taken out of circulation long enough to get someone more 'on message' in charge at the IMF. It can't do to have independent thinkers in positions of power. Replacing him with someone who led France to financial ruin is neither here nor there as long as she's 'on message'.
The maid is a terminal liar, illegal immigrant and perfect for the sting on DSK. He was a sitting duck as he believed his own spin. That he was one of the 'untouchables'. History is full of 'untouchables' who have come unstuck. Dead in woods, dead in underpasses, dead in portaloos, dead on mountain tops, dead in showers, dead in suitcases, dead in mountain glens. It's a wonder that he made the plane before he was picked up. The plan was probably to top him en route to the plane.
There's nothing personal against 'the untouchables'. it's just business.

That's the theory I'd accept RM. Of course there was also the fact of those in France who wanted him off the scene and out of the running for president.