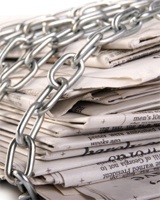 Apparently, Ed Milliband is suggesting that Murdoch, or anyone else for that matter, should be restricted to owning no more than 20% of the press? This is so predictable. Politicians, or to give them their technical name headless chickens, try to be seen to do something with meaning whilst showing responsibility. Of course they actually achieve the reverse.
Complete yawn time. Reach for the legislation. Several new laws designed. Tiresome voting required. Job done. Move on. The next overhyped crisis will be along shortly. Bank on it, especially if it’s a financial crisis but that’s another story entirely.
You can second guess what they will actually do. They’ll come up with something, implement it and then months later we’ll find out that it affects us more than it affects the people it was supposed to. Of course there will be absolutely no chance, no chance at all that they will then change it or ditch it. Once it’s there it’s there forever.
For goodness sake.
And… and… we sit back and take it. Everytime! Will we ever learn?
How about they do the following -a.  Bring all the UK newspapers into the scope of the inquiry.b.  Also include the BBC and all the other UK broadcasters.c.  Do not consider, plan or layout any new legislation until the inquiry has fully and finally reported.d.  Do not increase privacy laws, which will damage democracy by allowing the creeps, who tell us what not to do getting away with doing it them selves.e.  Split up the BBC and immediately remove the license fee.
f.  Give every license fee payer an equal share of the money raised after selling off every single bit of the BBC. g.  Re-enforce the requirement on all press and broadcasters to ensure balance at all times regardless of subject etc.
Will it happen?
Of course not.
Well at least not soon.
But maybe.
Just maybe sooner than the politicians etc. expect?
Let’s hope.
Petem
Tweet
Posted by subrosa at 10:14

As you suggest, entirely predictable. I am waiting for the regulation that makes the BBC licence payers responsible for only 20% of the BBC and the other 80% mixed ownership - it might be a long wait!

Works for me Petem.

Its pass the hot potato time …..press moguls -> police -> politicians -> press moguls -> and so it goes round and round again.
When the music stops the one holding the potato will be the one we blame and punish, the rest will carry-on as if nothing had happened.

But as the music does not appear to have stopped it is as yet difficult to know who exactly to blame, who to legislate against, who to reform.

By the time that tune does stop, we, the great unwashed will be listening to yet another tune on yet another hot potato ….. politicians -> banks -> European Central Bank -> EMU -> politicians -> and so it goes round and round again.

As for your thoughts on the BBC – sadly a beautiful utopian dream – to many luvvies within the corporation are on the ego trip of a lifetime, and will never relinquish their position.

Not into the techy bits just Google Open Democracy.

Bit long to copy here - and a bit luvvy for my taste re Miliband; but otherwise its bang on the nail being hammered into Britain. And gives prime arguments for those of us who want Scotland out.

Do not worry, people. They will make sure it cannot happen again. Get caught with their pants down again?
They will make damn sure THEY cannot get caught the same way again. They will not bother if the results cause us problems, their ideal is we know our place, shut up, and keep paying!
And voting for them.

Sorry, can't agree with g, for a couple of reasons. One, I like to know what "the other side" (and there alwasys will be one) are thinking. Honest and open debate requires that we hold, and can defend and substatiate, strong, clearly outlined ideas and principles, which brings me to my second reason:

If all media are required to "ensure balance" -logically impossible, never mind intellectually barren, who is the final arbiter of "balance" and why should we trust, or cede to,their particular interpretation. Far better to have a plurality of opinion, however strong or mis-guided, than a miasma of soft-left drear, anoydyne and timid, frightened to hold an opinion for fear of upsetting or antogonising any amount of nameless "others". We may as well all subscribe to the Guardian, or Observer, now and have done with it.

BBC have, I gather, some 88% control of UK news coverage. They should be very careful of what they wish for...

Thanks Woodsy 42. What started out as a supposed quality broadcaster has plumbed depths that are shocking and which do not fit with their current governance.

No problem though.No one is about to take them to task.

maybe that large black dog could come in handy to control at least some part of the BBC OR. Hmmmmm.....

It will be a utopian dream until someone or more likely some people sort it out. Big job and long term JRB.

I'll have a look at the Anthony Burgess article Crinkly. Thanks.

Other countries manage with better balanced media. There always seem to be some who wish to hold the majority and some where it's a single voice.

Fox News is an example of an alternative. It's also the shining example of why the BBC have spent so much time and energy on the current crisis. There should be balance Hubris and a way of maintaining it

88% control of news Elby. More people need to wake up and switch off. Hey that could be the calrion call for BBC opposition.!!!!!

All media are not required to ensure balance. Whatever gave you that idea?

There are certain restrictions on broadcasters during the short campaign period of an election i.e. once an election has been called, in terms of the amount of air time that they give to political parties - they must be proportionate. There are no such legal restrictions outwith the short campaign period as far as I am aware. There are no such restructions on the printed media at any time. That is why papers can endorse one party or another.

The BBC at one time had class, or so it seemed - I add that because through the advent of the net its impossible to audit its accuracy and bias or its lack before the net came on the scene - now it only has form.

Now the public service it performs is to dumb down its audience with edited sound-bites of establishment hype, and we're daft enough to pay for the privilege.

Hubris 69 makes valid points - we don't want our news or press defined by percentages or privilege of state - we want critical analysis backed by fact and audited by truth.

Tits, bums and titillation may keep the presses running and the spam advert revenues coming in but, if and until they get some integrity back, there only real purpose will be to save on the Andrex.

Well Indy, my suggestion was that this would be endorsed and would become a requirement for entire media.

State controlled? I think not. Freedom of the press is one thing but the endorsement of political parties at anytime is quite another.

Perhaps the press/media are still operating without taking into account the new ways of communication open to them and of course to their market.

Upholding press freedom is a worthy aim, however with that freedom come responsibilities. Our press may not be up to the second part at the moment.

The fact that the Sun and The News of the World are/were the best selling newspapers proves the dumbing down which has taken place.

There is still great output from the BBC but even that becomes tarnished by advocacy. There is no case for a license fee and a broadcaster of the type which the BBC is. The consumer should be able to choose Crinkly.

The BBC has made a bit of a mistake by thinking it has to compete with commercial rivals & that has led to its dumbing down in my view.

Frankly we can blame Rupert Murdoch & Margaret Thatcher for that as well as others.

I would vigorously oppose the dismantling of the BBC. If you want to know why, watch Fox News.

Indeed Observer, Murdoch's arrival and his climb to power started with Maggie.

For me the depoliticising of the press would create a difference literally overnight. This state of affairs where one news item can be spun in newspapers according to the political leanings of the newspaper demonstrates exactly why it is useless. If we had a press committed, across the board, to reporting the news accurately and to truly holding politicians to account many truly awful things could not have happened in the last ten to fifteen years. Like Afghanistan, Iraq and what we are now involved in over by in Libya.

With an honest, responsible press politicians would indeed be afraid of it but for reasons we would all be happy about!

That's what should happen, but I reckon that the Journalist and the politicians think if they talk long enough about this 'non-story', we'll get completely, fed up with it and they can get away with it!

I'd be happy to have the BBC stay as it was as you suggest Observer however, only if it was privatised and the license fee was discontinued. Let the viewing public decide what they want to watch/listen to and how much they are prepared to pay for it.

Totally agree Jo G.No newspaper should have the right to suggest to voters who they should vote for.

We don't want press controls but the responsibility of their owners/shareholders etc. should include ensuring that the language used in bulletins and reports does not allude to sensationalism.

Just give us the facts without endless conjecture also.

Who knows what the true aims of the press are at the moment DG. Well beyond it being obvious that the BBC and the Guardian want Murdoch neutered. The Guardian are a short time away from also being exposed. That could be fun.
Humble Pie anyone?