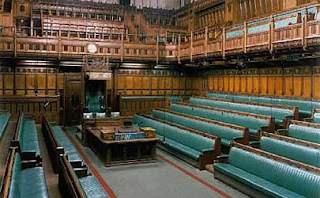 Quietly last night, smothered by the Murdoch fiasco, the Westminster parliament voted 274 to 246 in favour of increasing the UK's contribution to the IMF by £9.3 billion.

According to John Redwood the result implies that more than 80 tories were unavailable, abstained or voted against the government.  Many Labour MPs behaved in the same manner even though Labour recommended voting against.

Mr Redwood states he will be checking the voting lists later today.  I do hope he names the 80 complete with voting intentions.  That 274 MPs voted to give the IMP nearly £10 billion to support its euro fantasy shows they have little regard for the average working person who is being taxed into oblivion.
Tweet
Posted by subrosa at 13:12

Hello by the way!

What's even worse (btw why weren't Labour M.P.s whipped?) is that the money will be spent on a country that is in virtual default. Or rather, circumtuitously, to rich financiers to buy Greek assets at knock-down prices to the benefit of no-one but themselves.

When Greece does default absolutely - guess which "state" has underwritten most of the guarantees? The U.K.

Who will have to bail out these institutions when they can't repay the insurance on Greek debt?

You and I and our fellow "subjects".

My Dad can't pay his gas bills these days...

Who and what are we protecting by doing these things exactly?

Well,well well!- first they robbed all us Peter's in order to save the banks who were too big to fall because, in their incompetent hubris they considered them too magical in their myths to ever fail.

Now having pawned all of the present and future generations of Peters, they're being blackmailed by the same banks and expected to pay ransom by way of interest for the privilege.

If - and its a huge if - that's a way to run the economy of a nation then the only qualifications needed are Ph.D. in the en action of lunacy.

In my opinion the headless chicken scenario is beginning to accelerate into focus.

Hello John B. I wondered that too and searched around to see if they were but it doesn't appear that way.

Aye I read that just today.

Just can't believe how our politicians are so stupid to be throwing our money away.

Sickening indeed. Regards to you too.

pa broon, it does and there are many thousands like your Dad believe me. It can only get worse too.

They should be horse whipped brownlie and not by some person in high heels either. I'd choose someone with tattoos over both is muscular shoulders.

We'll be the biggest losers Crinkly. What I don't understand is why the IMF needs so much money when it's a bank. Surely it should be able to work from the interest etc it gains from loans.

There is an interesting question which I have thought about a lot regarding Government Debt and it is this:

Where does all the money that Government borrows come from? Who owns it? It is not sufficient to just say 'Banks' because all money in banks is held in bank accounts of one sort or another.

I rather suspect that this money is not money at all. I rather suspect that it is 'figures in a computer', and that it somehow a reflection of wealth in the sense that, for example, I could borrow money on the security of my fully paid for house and then lend it out again at a profit. Thus, the Government could do the same thing, but using the whole property (including yours and mine) of the nation as 'security'. But the Government do not need to borrow from a bank, it creates its own bank.

I find it all very confusing. Who owns the money that the Gov borrows?

I think China and other eastern countries are involved in lending to us Junican.