A Case For Interpol 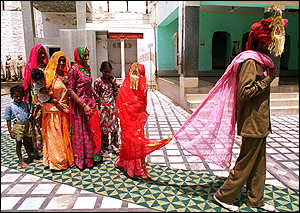 A third of child marriages take place in India say UNICEF. Girls as young as under ten are married to men old enough to be their fathers or grandfathers. Nepal and Pakistan are part of this horrific scenario where wee girls are sexually abused by men so much older than themselves.

Be it through religion, culture or ignorance I abhor the abuse of children and in particular female children. Genital mutilation in females is horrifying yet can't be controlled for reasons we could, but don't want to address; Jews continue to mutilate their male babies and even celebrate the event and various cultures encourage the rape of young girls by 'marrying' their tiny daughters off to men for money.

Six staff in a UK nursery warned their superiors about an employee who they suspected was abusing wee ones.  He was given a written warning and went on to rape a toddler, filming his disgusting actions on his mobile phone.  He was given a 15 year sentence.

Yet this is one of the most sickening videos I've viewed involving children.  It's my understanding it has been withdrawn from Youtube and the blogger Max Farquar managed to copy it beforehand. For some reason I can't access Max's blog so the link goes to another blogger who has also published it.

Whether it's to do with religion or culture doesn't matter to me. Young children shouldn't be raised anywhere in the world by sadists and the individual in the video is a sadist.  One appalling point in this film is that someone actually recorded it without making any protest and - if you can bear to watch to the end - other adults are seen to be present in the room.

We are a country who supposedly provides aid to those in need in foreign lands.  In the years since we've been providing billions in aid to these countries I've seen little change. It's all very well for celebrities to appear on television once a year at Comic Relief and pose grinning in front of a well declaring a tiny community now has water - I've never been impressed by such broadcasts.  With the billions we've provided to less developed countries than ourselves I thought by now every person should have had clean drinking water and at least been provided with a basic understanding of sanitation.

But it's not so. Little has changed and child abusers continue to ply their evil trade, both here and abroad. Our politicians throw money away - calling it aid - but cannot account for the investments.

We all contribute, via our taxes, to Interpol.  Surely there is enough evidence from this video to arrest the perpetrators of this detestable child cruelty.
Tweet
Posted by subrosa at 09:29

I'm amazed Mandleson hasn't pushed for same sex marriage for him and his mates, in a similar manner you describe. Like gays, they can't help it so it's alright, isn't it?

That really is an apalling video. What makes it so despicable is the chuckling in the background.

The UN Convention on the Rights of the Child is quite clear.
Until aid money is dependent on recipient nations implementing the provisions of the convention, DfID Ministers will be guilty in the court of public opinion of assisting child abuse. The same applies to countries that discriminate against and mistreat women. Religion and culture are no excuse for criminal behaviour.

No it's not all right OR.

It was horrifying FE and to think that adults allowed it. Those involved are certainly very sick people.

But who will investigate this type of thing Brian? The video was on Youtube but removed. Surely with all the policing services we have someone somewhere should be finding out who this sadist is. It's clear enough.

Rosie,
According to Max Farquar the sadistic scum is Algerian. Corporal punishment is prohited in Algerian schools: article 21 of Law No. 08-04 (2008).
Perhaps the Algerian Ambassodor or the UK Algeria Trade Council should be informed, suggesting a boycott if the git isn't brought to book.
DfID doesn't have any leverage as, for a pleasant change, it doesn't waste borrowed money in Algeria.
The Foreign Office will probably huff and puff and say that Algeria is "a valued partner in the War Against Terror". This sort of terror, notice that the children didn't cry so they were used to the assaults, is the sort that should be fought against.
Can Cameron assure us that none of the £650 million jizya to Pakistan hasn't gone to madrassas with similar practices?

I am against the abuse of children too, & in favour of the rights of the child & other liberal stuff like that.

I am also in favour of the right of the child who grows up gay to get married to their parter if they want to.

Brian, I couldn't access Max's blog yesterday on either Safari or Firefox so didn't know the story.

Wherever it is Brian, surely the international police can do something about this abuse,

I'm in favour of children being nurtured and protected Observer. Think I also said in the post that child abuse does happen here as well as in other countries.

There have always been adults who abuse children, but I just wonder, with all our fancy systems such as social workers etc., has the percentage of abused children reduced?

Of course now we have child trafficking - a modern evil.

Rosie,
Interpol may be able into intercede in child trafficking but I think its constitition prevents it from issuing an arrest warrant for the thug in the video who could be arrested and prosecuted by Algerian authorities instead.
Looks like emails to MSP, MP, MEP, Algerian Embassy and William Hague might be the best approach.

Hi SR.After reading the previous comments,can I respecfully suggest that you all read this...
http://www.dailymail.co.uk/news/article-2020391/Probe-secretive-Sharia-law-courts-scrapped-Muslim-leaders-close-ranks.html
...and consider ALL the implications.
Think about them, then look at some of your comments and think some more.
Are you sure you know what you are asking and what you want,your motivations and the implications in doing it? Just saying, like.

Thanks for that advice Brian. I'm surprised there is little protest at the treatment of these wee ones. I would have thought at least someone in the MSM would have highlighted it.

Hi Apogee. Mmm, I see what you mean I think.

Spoken from the heart and well said, SR.

Foreign aid is basically a scam and if it ends up supporting stuff like this and the people who condone it, then it's evil too.

One of my readers says this abuse took place in Algeria WY and we don't give aid to Algeria. Nevertheless, we should know where every penny is to be spent and have genuine proof of spending from the countries to which we do donate billions.