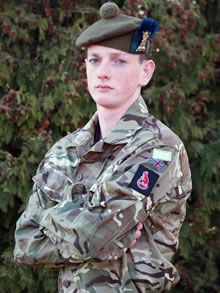 Twenty year old Scott McLaren would never have thought the above photograph would ever be used. No military person gives the compulsory photo, requested by the MoD when combat deployment orders are issued, more than a fleeting consideration.  They don't dwell on their chances of being killed; if they did we wouldn't have voluntary armed services.

This young man was from Sighthill, Edinburgh and deployed to Afghanistan in April this year as a rifleman in D Company 4th Battalion, The Royal Regiment of Scotland.

Something went tragically wrong on Monday when Scott was discovered missing. I've no intention of speculating on the circumstances except to record he was found dead after a full search by the military. His family have suffered a great loss and the his squadron too.

Another life lost in this war which has now claimed 375 of our military. Surely now our politicians realise we can't instill a western-styled government into these lands. It's been evident for years the majority of Afghanis want to run their country by their own methods.  Yet we continue to pour more and more millions into Afghanistan's corrupt government's greasy hands.

David Cameron announced today a further withdrawal of 500 troops by the end of this year. Add the 400 withdrawn earlier this year and when 2012 arrives less than 10% of our troops will have been brought home. He promises all shall be home by 2015.

Meanwhile the killing will continue on both sides and more body bags will arrive at Brize Norton.  It's all very well offering children bursaries if a parent is killed on active service but wouldn't it be more acceptable if they had lost their lives protecting these islands instead of fighting for a share of Afghanistan's gas and mineral wealth.
Tweet
Posted by subrosa at 09:32

That we still pursue this long gone fox is a disgrace. The terrible figure is now 375, I believe. The dreadful wounded and maimed remain a difficult number to obtain or comprehend. Still, Dave and our political giant pygmies have a grand life so who cares?

He wearing the Jerboa on his arm which makes him one of mine. His platoon was attached to The Rifles and I remember a time when Highlander and Rifles regiments marched together, also Jerboas. He should not be forgotten. My thoughts are with his family.

I wish I could find a collection of photos of those wounded OR and show people the thousands involved as well as those killed.

Stop killing altogether would be fine CH. I'm all for that but it will only happen once many more women are leaders.

He was only a lad Demetrius. Not even old enough to buy a can of lager if politicians have their way.

Condolences to the family & to your comrades ..