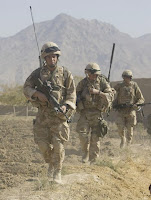 A soldier, from the 1st Battalion The Rifles, was killed in Afghanistan yesterday while in the Nahr-e Saraj district of Helmand province on an operation to recover bomb components.

The soldier's tragic death occurred on the same day General David Petraeus handed over command of the Afghan war to Marine General John Allen.  General Petraeus is returning to the US to take over as director of the CIA. As he leaves, it remains unclear whether his strategy - with an emphasis on protecting the local population and decisive strikes against insurgents - has made Afghanistan any safer.  Last week the UN reported that the number of Afghan civilians killed in war-related violence rose 15% in the first half of this year.

The US has lost 1670 military personnel since 2001 when the Afghanistan war began. We have now lost 377.

When he took over a year ago Petraeus brought in more than 30,000 troops in a surge designed to bolster his counter-insurgency plan.  Little has changed.  Why?  Because there are no winners and losers in this war, only losers.  Britain has just lost once again and the Afghan people gained nothing.
Tweet
Posted by subrosa at 09:19

My thoughts are with the young man's family and friends.
The UK has suffered nearly 25% of the fatalities of the US but its force levels have never exceeded 10% of the American contingent. Doesn't that indicate a fault with our strategy, tactics and equipment? It is morally wrong to rely on brave and dedicated men and women to make up the deficiencies by risking their lives.

So sad to learn another of our Service personnel has given his life for the sake of Blair/Brown/Cameron not having the balls to admit to their political folly.

With the recent news that those who survive will then face redundancy makes you (me!) wonder why they put their lives on the line.

The suffering of the families and friends are very difficult to visualise Brian.

Yes another volunteer HC. How lucky we are to have people to do the job without pressure.

Joe, most enjoy it. If you read the ARSSE forums you'll notice the camaraderie and skill standards compensate for the thought of what could happen. Perhaps many do it in the hope that there's no bullet with their name on it.