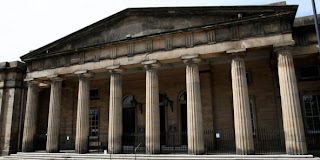 Call me naive but until I was about 40 years old I always thought the judiciary of England (when I lived there) and Scotland would protect the law-abiding from those who are hell-bent on criminal activity.  In recent years some judgements in both countries have left me feeling considerably confused and in certain cases wondering about the mental health of some judges.

This is one example of my doubts concerning the Scottish legal system.

A registered paedophile Graham McLean, 65, has a record of indecent assault and indecency. This individual pleaded various health problems when he was caught with over 1500 indecent photographs of children on his computer(s). The Sheriff at Perth's Sheriff's Court decided his sentence would be 27 months in prison and granted an order that the pervert should not to access the internet for 25 years through an SOPO order.

An SOPO order prevents a sexual predator from possessing, owning, using or having access to any computing or other equipment including a mobile device with internet facilities.

What good is it to imprison a man for 27 months when he'll be back in the community within 9 months and who has a history of indecency from accessing the internet?  How would this be policed?

Again I despair at our legal system. This man will always get his rocks off and will probably have access within the prison system to computers - albeit it controlled access.

More and more often I despair at our our laws.  Why is it that a man who has a history of paedophlia is allowed out of our prisons?  For many years I thought that people who  abused children in this way deserved a certain sympathy.  Let me assure you their defences can be quite emotional.

Now my opinion has hardened.  Men (and women) who use children for their sexual gratification should be locked up for a long time.

As I said, this man will serve around 9 months, but how will it be possible for him to be policed?  Anyone can access the internet at any time and a man who has managed to download so many photos of children will never be deterred.

The question of permitting mobile phones in prison is another post of course.

They can't police that. It's the cheap option, the easy get out for salving politician's consciences. Unless he's going to be tagged for 25 years and someone sitting monitoring his every move, or following him 24/7, then it is the most pointless sentence out there.
27 months in prison is pathetic considering the 1500 damaged souls whose photographs were on his computer. The majority of whom will have a lifetime of confused dysfunctionality to live through as they deal with the abuse as best they can. The consequences of this man's actions are far reaching in terms of mental health care interventions that may and probably will occur to many of them.
He has not only burdened these children and their immediate family, but the whole of society, as we are the ones who pick up the broken pieces with our taxes through social works and health care costs.
Paedophiles need to be dealt with more realistically as should the scope and damage their crimes bring about.

Castration is good or maybe being killed

Judges live in a different world.
They make a court order and believe it will be obeyed!
It's a simple as that, and, as they see it, it's the end of their responsibility in the matter. No one can sue a judge if they are harmed as a result of his incompetence or stupidity.

Hazel that's the most succinct comment about this matter. I hope you don't mind if I use it as a response but you don't have an email contact on your own blog.

Niko I agree entirely. Women would have a far more appropriate punishment.

That's the problem EP,judges have no responsibility other than to announce laws. They're not involved thereafter. If they were then they're bright ideas may not seem so bright.

Yes there seems to be a gradual breakdown in law enforcement and common sense in general.
There was the case this week of Sheik Salah who was banned from entry to the UK but walked through customs as Sheik Salah and went on to do a speaking tour of the UK.
Or the man today who was threatened with a fine of £1,000 from DVLA for displaying a rude number plate.
The fact that he had paid DVLA £399 for the number plate was neither here nor there as far as they were concerned...

What sort of punishment would women like Myra Hindley and Maxine Carr have delivered to paedophiles? Or look at the number of women who send marriage proposals to the likes of Peter Sutcliffe. I think we can drop the sexist claptrap that women have some special insight, or revulsion, about this that men don't have. The vast majority of men are disgusted by this activity and want to see stronger sentences too.

I agree entirely with Hazel. My impression is that the courts regard viewing images as somehow a lesser crime than committing actual abuse. Of course some children have to be actually abused to obtain those images in the first place. It's usually only a lack of opportunity that separates someone who views child abuse images and someone who commits child abuse.

The courts don't punish this crime severely enough. I also regard paedophiles as one of the few criminals that cannot be rehabilitated.

A maths teacher at the school I attended, King Henry VIII in Coventry, collected 1200 paedophile images and was sentenced to 3 months ..... suspended for a year. He was a bully who enjoyed humiliating pupils. I owe him my hatred of all authority. I wonder what he is doing now?

I never understand women who behave in that manner William and I never will.

There's something wrong with laws when we lock people up for non-payment of council tax yet people who prey on children are given small sentences.

You wonder Brian? Like William I too doubt if paedophiles can be rehabilitated.