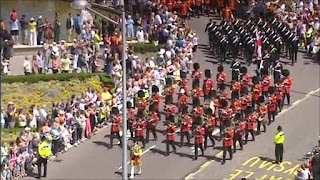 Today is Armed Forces Day which is an American idea Gordon Brown decided to import back in 2009.

The website states: 'It's an opportunity to do two things.  Firstly to raise public awareness of the contribution made to our country by those who serve and have served in HM Armed Forces. Secondly it gives the nation an opportunity to show our support for the men and women who make up the Armed Forces community: from currently serving troops to Service families and from veterans to cadets'.

Is it necessary to have a 'show' for the people to appreciate our military? In Andover there are some who don't. The talk on ARSSE is that this story has been concocted (surely not!) and the banners were erected against council rules.

This year's host city for the national event is Edinburgh.  The great and the good will be vying for front seats during the weekend. Here's one lady who certainly should be honoured with a seat right at the front - although I doubt if she's had an invitation -along with the hundreds of veterans who quietly live their lives without expecting thanks. As many have said to me over the years (I'm paraphrasing): 'I need no thanks. I'm just grateful I had the opportunity to work alongside such reliable, honourable and trustworthy colleagues.' How many of us can say we've had jobs where everyone had these qualities?

This country has changed greatly since I was young - in many ways for the good, but not always.  The Edinburgh event is being policed in a vast operation comparable to last year's papal visit and other such grand events, because there's the possibility that some visitors may not be attending to show their respect.

It's a sad state of affairs when the police have to come out in such numbers to protect our armed forces.

Update:  Mention should be made of Alex Salmond's announcement of a bursary for the children of members of the military who were killed in action. Sometimes, if a service family lives in military quarters, then not only lose their loved one but their home and this creates even greater pressure on the parent left behind.  It will be welcomed by all Scots who are associated by the military.
Tweet
Posted by subrosa at 09:34

The last time I was in the palace of Westminster there were large numbers of soldiers in smart shirtsleeve order.

A flight of fancy did briefly occur to me that some latter day Cromwell with a Colonel Harrison and a file of dragoons at his back might have arrived to cleanse the temple - and I didn't feel all that unhappy at the idea!

Dare I think the unthinkable - but I have to question the necessity for all this show of pomp and ceremony.

I have this nagging doubt that this whole event is merely for the great and the good to be seen ‘doing the right thing’ - but at what expense?

I feel sure the average soldier would rather have a three day pass to return home to friends and family, than having to bull his boots and clean his equipment prior to parading round the streets Edinburgh.

Or, rather than spending all that money on dignitaries etc, why not just open every mess in every camp as a ‘free’ bar and let the lads enjoy themselves.

What JRB said
+
A real appreciation of our military would be an end to the MOD's regular attempts at downgrading post-service care for personnel injured/killed in pursuit of the government's interests.

Edinburgh? Won't the celebrants fall over the tramlines or down the holes in the roads?

How the rest of the UK and much of Europe must envy us the good common sense government we get from Edinburgh.

The British are tiring of war, as in America. The awful consequence of that will be a decline in support for those most deserving, The Armed Forces. We are seeing this in many ways already. Of course that's an attitude that suits our EU masters and their rapidly approaching EU force planning of many decades.

I wouldn't have felt unhappy either Edward.

John, I don't know if you noticed my lack of opinion because I feel rather like you about this. It's an extra day's work they could perhaps do without.

As for the veterans that's different. We should hold a Veterans Day. They deserve it.

Mind you, when the British Legion organises anything they insist it's high profile. The likes of BLESMA and Erskine Hospital have events which don't attract royalty etc but still provide an occasion for cameraderie.

It would indeed TT. Unfortunately they've nobody to fight their corner and Westminster takes advantage of that.

I don't think the Royal Mile is affected Woodsy and I'll bet the royal car never went anywhere near them either.

Yes Tris, I was delighted to read about that earlier. One a serving person is killed all military allowances halt immediately so this will make a big difference to the few. Thankfully they are a few but a few too many.

We are OR and it's evident with the turnout I've just seen on television. The BBC are trying to jap it up but the spectators aren't there except for the pipe bands.

Rosie, I must admit I have some disquiet over this. For one thing, I don't follow the Government line that we're over in Iraq and Afghanistan for security reasons. I don't belie the bravery of the forces, I just don't believe that many of them have thought exactly why they are in it. If they were defending our borders, I would be 120% behind them, I just find it strange that they are in foreign lands for the sake of a gas pipeline. http://www.proparanoid.com/priorknowledge.htm

Hi DL,many are in it because the signed up prior to the UK having warmongering leaders. If they resign before their contract expires then they loose much of their pensions but watch in the next 5 years or so. So many of the high flyers will have left. It's already started. Without those people the quality of our armed forces will rapidly decline but that's what Cameron wants, then he can integrate with an EU force because we're unable to stand alone.

Youngsters join up because there's nothing else for them and believe it or not, a military life is a good one. You work with people who trust and grown to respect you and no one day is the same. That's exciting to youngsters. They're not well paid at all, but have enough to survive.

Is the Salmond bursary in addition to this one?
What's the point of an Armed Services Day if their dead are smuggled out of the back gate of RAF Brize Norton along back roads?

Ye, but we've always had warmongering leaders. That's why at one stage the sun never sat on the British Empire. The US is trying it without actually conquering the countries just putting billions into the leaders' pockets and if they grow tired of you, you're out. Aka Gaddafi!

Brian, no it's not as far as I can see but I'm awaiting confirmation from the Scottish government. I've emailed to ask.

Brian, thanks for the other link. I didn't realise that decision has been made. I'll await the reponse of the SG about the bursaries before I write anything.

DL we've never had them as keen as Blair, Brown and Cameron for some years though. Even Maggie wasn't as bad.

And it came to pass as Dram predicted it would:
http://www.dailymail.co.uk/debate/article-2008170/PETER-HITCHENS-As-Dave-does-talking-war-dead-sneaked-gate.html

Thanks for that Dram. I missed that one. I was waiting until I received a response from the Scottish Government about Alex Salmond's declaration of bursaries, but now I think I'll do a post for the morning about this. It's a disgrace.