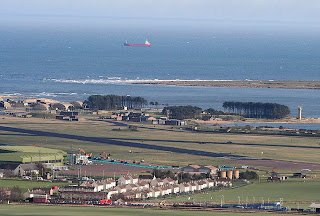 Leuchers airbase
The shameful handling of the maritime surveillance aircraft Nimrod has wasted around £4billion of taxpayers' money and is the cause of the closure of the main maritime surveillance base at RAF Kinloss, although some insist the cancellation of production is money well wasted. Maybe so, but our coastlines need to be protected and without suitable aircraft the Westminster government has suddenly decided the safety of these islands is at risk.

With other countries now purchasing the Boeing P-8, the Westminster government is also thinking along these lines.  But from which base would they fly?  Liam Fox has already announced Kinloss is to be closed and he's been vocal about another base closing here, so it would appear the P-8, should they decided to go ahead, will operate from an English base.

Liam Fox is in no hurry to decided the future of the other two RAF bases in Scotland and says the decision will be made later this year, but rumour is rife here that the decision has been made to sell off RAF Leuchars. Of the two I'm in favour of Leuchars being sold because far less damage will be done to the local community. Of course the MoD isn't looking at these closures from a militarily strategic position but from one of financial gain.

To close RAF Lossiemouth would be the death warrant for an area of Scotland which, although very beautiful, isn't particularly accessible unless by private transport.  It also wouldn't be an 'easy' sell because of its position.

Leuchars has it all, which means it has a rail station (something of a novelty in small towns), a good bus service is easily accessed. It's near enough to Scotland's central belt to me within easy commuting distance and also only a few miles from St Andrews, perhaps one of Scotland's most famous towns - certainly one of the busiest here in the east.

Back to the rumour mill.  Last week it was said that Ryanair had been to check out the £27million new runway and other areas of the Leuchers base while those associated with Dundee airport have also been evident in the area.  Dundee airport is small and therefore the size of aircraft it can accommodate is limited while Leuchars can easily accept a Boeing 737.

The idea of Leuchars becoming a commercial airport is good news for this part of Scotland and even better news for lovers of golf who year round visit the shrine of the Old Course.

However, isn't it time Mr Fox made a U-turn about Kinloss also? It's common knowledge that Kinloss is in the best position to provide maritime surveillance and with Scotland having a third of the UK's coastline it makes sense to fly the P-8s out of that base.  Somehow I think a rethink about Kinloss's closure will be a step too far for Mr Fox and his cohorts.  Few politicians view this country in the long-term and that's part of the reason they waste billions of our hard-earned cash.

Is it too early to consider the closure of bases and assets sold off may be in part due to potential Scottish independence? Maybe not?

On the other hand the Navy and the RAF are sharing assets with the French. Perhaps the integrated European defence forces will require less independent and possibly duplicated bases in the UK and in other EU countries?

The thing is who knows what Dave and his chums are going to come out with next.

"On the other hand the Navy and the RAF are sharing assets with the French."

Perhaps they could close all Scottish bases, and just berth a French carrier at Aberdeen?

If Scotland becomes independent, she could then sail south to Hull.

I have heard speculation concerning the MOD pulling out of Scotland, and as petem130 says, the speculation links it to the possibility of Scottish independence.

If Mrs. Queen starts selling property here, it will look like a certainty.

I still think independence is futile as long as Scotland is just another region of the EU, because nothing will change. Westminster isn't calling the shots anyway.

Heh SR, so the British politicos are thinking of selling off another part of one of our colonies? Hell, we can't do that - at this rate there'll only be England left! Mind you the bastards have virtually 'sold' England anyway!

(Trust you appreciate my warped sense of humour!)

We live in interesting times.

I'm with Leg-iron. I'm hoping Wee Eck and Deputy Nippy will go for an agreement to work with the EU but retain control of fishing and the like. Similar to Norway maybe or Switzerland. But no daft non-democratic regulation and policy making from Brussels.

I think it will be interesting to watch Eck and Nippy drop the green stuff and all the policies which stand in the way of a modern democratic country. Hey I can dream can't I?

That could be part of it petem but it's foolish if they want the Scots to believe the rest of the UK cares.

I'd suggest the EU force route is what they have in mind.

The suggest that our Navy combine with the French is madness. A country's military independence is its main strength.

Would the Aberdonians wear that though Joe? They haven't been dealt much as the oil city of Europe have they?

Mrs Queenie will hang on LI, it's what Charlie does that matters. But that's another book isn't it.

I always appreciate your humour WfW. :) You're right though, there's very little left in the UK that is British anyway. I was reading something about the London Eye, the Dome etc all belonging to foreign businessmen. Lots of Scotland does too.

That my stance petem. A negotiation like the Swiss with the EU.

The green stuff will come to a grinding halt in 10 years petem, once it's proved it's unsustainable and most of the country is in fuel poverty.

You cannot have it both ways. You cannot want Independence and expect the English to continue with bases in Scotland can you?

I believe in the UNITED kingdom not the breakaway model created by the Labour Government in allowing the Scottish Parliament/Welsh and NI Assemblies with the additional cost of more third rate (except Salmon) politicians living off the backs of the people.

Now that is a reality we have to live with the consequences. That is an independent Scotland more linked to Europe, as in their historical past.

So England must look ahead and prepare for the eventuality of losing Scotland as a full partner.

There are airfields, such as Truro, which was an MOD airfield but allows civilian flights into and from there, which could be re-opened fully as an MOD Base.
There are so many more.

The facts are simple, Subrosa, under Labour Scotland got far more of its share of defence contracts than England. It is well time for England to benefit. After all we are the largest Country in every respect!

Wishing you all well.

Frankly if I was in charge of defending the UK and one part of it had just elected a nationalist party with a referendum policy then I don't think I'd be rushing to move resources/infrastructure into what might be a different country inside a decade.

Tactically it might make sense (showing unionist commitment in advance of the referendum etc) but strategically it would be daft.

Of course I can't strapworld, but we don't have independence and the security of these islands should matter more than political games.

I can tell you're a unionist. '... allowing ...' There was a referendum for a Scottish Parliament and the Scots voted yes.

There isn't another airport in the whole of the UK as efficient and geographically perfect than Kinloss for maritime surveillance. Not any old airport will do strapworld, but if that's what you think then go for it.

Unfortunately, the majority of Nats can't see beyond their own nose.

The infrastructure has been here all my lifetime ASE and there's no question of anything moving in - quite the opposite.

I'm not complaining about that in the least. I thought I was being upbeat about it. Obviously my optimism didn't show. :)