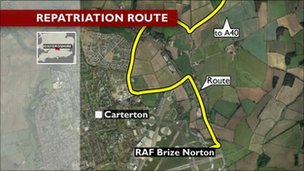 The homecoming of our fallen will be moved from RAF Lyneham to RAF Brize Norton in September.

Unfortunately in more recent times it also became a media circus when interviewers ran around clutching microphones and asking stupid questions of those in attendance. Sometimes it was difficult to listen to the falseness of reporters as they pressurise the public into making statements.

Now our dead are to be returning to RAF Brize Norton, an airport I used to know well and I doubt if it has changed much in the intervening years. The plan is that the corteges leaves by one of the back gates of the airport and is routed down side roads to join the A420 to Oxford.  Some are up in arms not only because of the back gate plan but why the route doesn't go through the nearby small town of Carterton.

Andrew Robathan's remarks did rile me:

I am not sure taking coffins in hearses past schools, past families, past married quarters is necessarily the thing that everybody would wish to see .  .  . the focus must be on the families of the dead service  personnel. They are the people who care most. That is where our focus is.’


Of course the focus must be on the families, but his excuses about coffins in hearses going past schools is political speak for: 'the real reason is we want to keep the sight of the dead away from the population as much as we can. We don't want the people reminded how many dead military return from the wars we've created'.

In a poll organised by the Oxford Times half the local people didn't want the corteges diverted through Carterton.  Repatriations usually take place on Thursdays and Thursday is Carterton's market day. The families shan't be concerned by this lack of interest as their grief will be far too profound to take notice, but some could be distressed by the fact that their loved one departs their last service base through a back gate instead of a more dignified departure through the main gate. 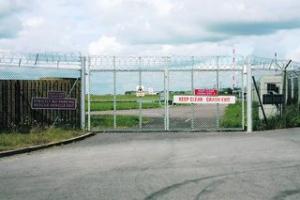 The MoD say the back gate is nearer the currently-being-built repatriation centre and to reach the front gate the cortege would have to cross the runway.  Such action would interfere with base operations. Erm?  Surely if repatriations are to be, once again, part of the base's operations the movement of a few vehicles across the runway would cause minimal disruption.

Having looked at some military forums a large majority of commenters would prefer the corteges to leave by the front gate as a mark of respect.  Only one serving airman said he didn't like the idea of meeting a cortege when he was arriving at the front gate for further duty in the deserts of far off lands.

A few suggested other forum members contacted the local MP about the use of the back entrance. He's sure to have quite a bit to say in response but will he take any action? I think not. 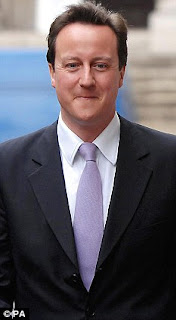 Aye, it's the UK's chief salesman who is MP for the area.

Update:  This morning I've been reliably informed that the last year no British service personnel were killed on active service was 1968. Political leaders have been perfectly content to have the body bags return without any public acknowledgement. None made any effort to ensure a proper and dignified ceremony was offered.  That was voluntarily undertaken by the joint armed services.

It's only since the generously spirited people of Royal Wootton Bassett decided to pay their respects that the public have become more aware.
Tweet
Posted by subrosa at 09:07

Shouldn't be said but this is so so wrong I will. A procedure initiated by those with an unhealthy fixation on their own rear entrances.

I'd have to agree with you John. It's back to the 'old' days when Blair etc wanted the body bags hustled away out of the vision of anyone.

Why not simply give the next of kin the choice - front or back?

Or would that be too simple?

Julia, knowing the services, that may cause a problem. My opinion, for what's it's worth, is that the front gate should be used as it is for all living personnel and civilian visitors.

We should not be in the least surprised by this.

For today’s ConDem politicians and their MoD underlings it is all about positive spin.
You can forget about ‘respect’ or what is the ‘right’ thing to do.

If there is the slightest possibility that anything might be reported on by the media and a spokesman might have to comment, then there must be a positive spin.

If it is unpleasant, or the message it sends could be interpreted as being negative, then it is brushed under the carpet – or in this case, swept out the back door.

Unfortunately for the politicians JRB, the old 'system' has gone and will never return thanks to the good people of RWB.

Better if the pageantry of 'respect' was played out in far fewer occasions and for far greater purpose.

Sorry - grief needs no ceremony and is forever private.

Maybe they are expecting a lot more bodybags - Libya soon?

As I said in the post Crinkly, the fact that corteges aren't going through towns is fine with me. It's the backgate business. Now if they tidied it/replaced it perhaps I'd change my mind slightly.

All those who have selflessly given their life for the sake of their country, should have the 'honour' of being driven past Parliament.

The unfortunate frequency of which, will at least be a continual reminder to politicians, of the results of their decision(s).

Now that is an idea Joe but of course they keep such matters well clear of London.

Madame, Figures now stand close to 3100 killed, maimed & very seriously wounded. I bet the public wouldn't be so supportive of Afghanistan if the truth came out...lambs to the slaughter & seduced by ConDem + Labour propaganda. This will come back to haunt in years to come. It always does, they learnt nothing from Op Corporate.

Thanks for the accurate figure CD. I couldn't find anything similar.

Cool here and very damp. Only had one totally dry day in two weeks, but I prefer that to claustrophobic temperatures down south. Nothing like our fresh air. :)

Yes like Billy said. Maybe some plans for Libya that will make the hundreds killed in Afghanistan and Iraq look like the good old days. Can't have dead bodies being shown on tv every night. Might make the peeps wake up from their tennis and Corrie.
I've not heard 'the plan' of what happens when we finally kill or remove Gaddafi. Any ideas ?
Heard rumours of attacks on Syria and Iran though.
Hopefully they stay just rumours.

Scary link Bill. Apart from the lives that will be lost how do we manage to pay for it all ?

RM,Gaddafi will possibly go the same way as Bin Laden.

Billy, as RM says that's scary but is it surprising?