The Bilderbergs, Twinings And The Mafia 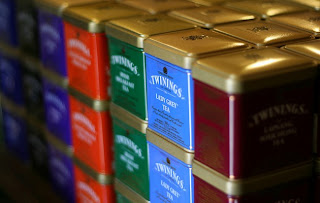 As the Bilderbergs' meeting draws to a close in St Moritz, Switzerland today, it's without doubt - given the size of the British contingent - that over the four day event, tea will have been served as one of the main beverages. I wonder if, in the assortment of teas which are bound to be on offer, if any are the product of Twinings.

One of my favourite beverages is Twinings Digestif, a blend of fennel and peppermint.  Last year it suddenly vanished from Tesco's shelves and when I asked the reason I was told the tea was no longer produced.

Then came the news that Twinings was moving part of its production to Poland with a loss of 400 jobs in the UK.  The name Twinings has always been associated with England and afternoon teas so it seemed that the move was a cost saver and nothing more.

But it was more.  Through a Polish subsidiary R Twining and Co., Twinings applied for an EU subsidy which would net then €12m.  The guidelines state these grants must be used for new investments and not moving factories from other member states.

Last year the Financial Times and the UK's Bureau of Investigative Journalism found that millions of euros in EU subsidies had been allocated to companies relocating plants from western to eastern Europe.  The investigation raised questions about whether the EU oversight of grants was strong enough, since EU officials rely upon regional authorities to avoid funding relocations.

Due to the joint investigation which was handed over to MEPs, the EU has blocked Twinings' €12m grant as they are not convinced the money is to be spent appropriately.

The EU Structural Funds Programme, which distributes €347bn of European taxpayers' money across 271 regions in 27 countries, makes up the EU's second biggest budget after the Common Agricultural Funding programme and with only 25 anti-fraud investigators and a web of bureaucracy it's almost impossible to track how money is being distributed and billions is being wasted and lost to fraud.

Twinings is only an ice cube in an iceberg. They should have taken advice from certain people in Italy:

'Italy’s most dangerous mafia, the ndrangheta, has become an expert at getting its hands on these funds'


I wonder if Mario Borghezio was offered the pleasure of tea after his incident with the security which surrounds the Bilderbergs? It's somewhat ironic he is protesting at the secrecy of the Bilderbergs when, as an EU official, he must be aware how opaque the EU is in much of its business.

Back to my wee tale: a month after Tesco's response, I was delighted to find Digestif on the shelves of the local Co-operative.  Concerned they perhaps were stocking it as an 'end of line' item I contacted Twinings in London. Their answer was very positive and I was assured there were no plans to end production. "Tesco has decided to concentrate more on our fruit teas." they said. There's only one reason for that.

This is a good vid about the EU Structural Funds Programme..

Approx 11% is stolen ( about £35Bn a year)
There are 5 'luxury' hotels on the Canaries. Never finished as they were built on nature reserves and shouldn't have got planning permission. No sign of the money of course.
Or the new highway in the south of Italy where the mafia take 3% of funding for 'protection'. The builders just add it to the price.

I was surprised to see Rory Stewart on the Bilderberg list. Osborne and Mandelson are a given but I thought Stewart was some sort of hippy expert on the middle east after his gap year trudging through the sand pit. He's obviously being groomed for the 'top'.

Rory Stewart certainly is not a 'hippy expert', former Army Officer, former Diplomat, an expert on the peoples/tribes of Afghanistan. He is a very educated man, Eton I believe.

I say an expert and I mean that. This day and age we get 'experts' in this and that who prove to know a bit but with no depth. This man has depth.

Sadly his gaunt appearance and analytical mind give people the wrong impression of this quite brilliant man. People do not like, it appears to me, someone who analyse questions asked of them and gives a very thoughtful and honest response.

That this man was elected by the tough, honest people of Westmoreland has shown that they can see an honest politician with a real sense of duty.

The great pity is that those lesser politicians, Cameron and Co, will ensure that this man does not reach the top.

That he was invited to this secret society (do they roll their trouser legs up?) shows that someone within that organisation has a job for him.

Once invited you are a (secret) member for life.

His profile is excellent for his role at Bilderberg. A gap year with the Black Watch. Not quite in charge of this and that etc. Hints of a dark brooding intellect that is never allowed to flourish. I'm thinking 'Jack Reacher'.

Johann Hari: It's not just Dominique Strauss-Kahn. The IMF itself should be on trial

They wanted to build a global financial system that ensured they received the lion's share of the planet's money and resources. They set up a series of institutions designed for that purpose – and so the IMF was delivered into the world.

Where have ALL THE JOBS (MONEY) gone?

Can you tell me when Rory graduated from Sandhurst ? There's no detail in google/ wiki / mps' blog etc.
For the record I agree with most of what he says about Afghanistan etc re - talking to the taliban/ rebels.

Good video thanks RM. Yes I was too initially, then I thought perhaps he's doing his apprenticeship. He's a smart lad by all accounts.

Many folk have been impressed by him strapworld and I heard even some of his friends were surprised he entered the political arena.

Somehow I feel, like you, that's he'll never be permitted to reach the top - not while the salesman's in charge anyway.

Thanks CH. Valuable information as always and much appreciated.

I somehow doubt if Rory Stewart completed a year's training at Sandhurst RM as usually recruits are required to sign on for a minimum of three years thereafter. He may have been fast-tracked in some way but I've never heard of that happening.

He could have entered the BW through the TA system though and that doesn't require a year at Sandhurst.

If he'd attended Sandhurst (where prior to training our soldiers have to sign to agree to join a regiment for a minimumof 3 years) and he didn't complete the course he would have been required to pay a very handsome fee for the privilege. Even then he wouldn't be able to use an officer's title.

Thanks for checking that SR. I tried to find out myself but got nowhere. The man is an enigma right enough. Eric Joyce's career is an open book in comparison !

Aye RM, but your comment has made me think about just how much we know about our elected representatives. I know quite a bit about mine because of circumstances but I doubt if many know much about theirs.