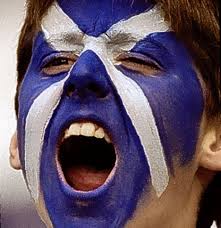 Oldrightie has a significant respect for any political movement that flies in the face of the left and Labour. If the price for tribal breakup is the wipe out of Labour and socialism North of the Border, count me in. If such a movement were to take hold in the South with UKIP becoming the ESP, my gratitude, to The Scottish tribes, would be one of immense pleasure to offer. Just bear in mind, however, history has never been kind to any loser in a civil war. We only need to look to The Middle East today to realise that fact. So forgive me for a modicum of anxiety and very well done Alex and The SNP. It will be very interesting to see how the future unfolds. Sadly, there are warning signs and this philosophy rules in the corridors of power. "However, such anti-democratic nationalism has already failed to bring peace to Europe." and the theme is heavily espoused in this paper, here. A meme that by itself is provocative and in my mind insulting to the human need to belong and identify with like minded and family orientated, natural instincts.
Tweet
Posted by Oldrightie at 19:34

I worry if such a loyal sentiment will happen towards Unionism in England, considering that UKIP haven't gained any more council seats than we have before.

I want my country to maintain and cement its links to each other as part of the UK. In that sense, I am an integrationist Unionist.

I just don't see that happening though - I suspect the Tories will become 'the South of England party' and the Scottish, Welsh and Ulster parts of this country will continue to divide themselves from the rest of the UK. The EU must be loving it.

I want my country back and I'm not sure that UKIP can deliver it as I don't see a decisive commitment to Unionism in their thinking.

Paul, if you want your country back you have to recognise England (I presume) is your country. Scotland is mine.

Thank you OR for your thoughtful congratulations. I just hope we take the right road, at the right pace, now but we'll need good fortune on our side.

My country is the United Kingdom. I consider myself British first, English second.

Congratulations. I watched the Scottish results all day, facsinating politics. One thing though, your very first Scottish nationalists MP, the woman who is now an independent. She comes across as a very bitter person indeed. What happened?

That said a truly momentous day. I just hope you kick the Labour Party out of your politics. They are not the party Keir Hardy dreamed of. They are now in it for themselves.

As for my Country, England, with the EU trying to kill it off I fear we have no chance unless Cromwell comes back.

It has been a momentous nearly 24 hours Strapworld. Me too and the libdems have to learn that trust has to be earned, not just spoken.

As for Margo MacDonald, it's a long story and I don't know much of it but if you google her name and include her husband Jim Sillars would may get a kind of picture.

I think, even today, some in the SNP still realise Margo is a more skilled politician them.

Congratulations to the SNP, I don't know if Scots would vote the same way in a Westminster election (probably not) but without Scots MPs Labour could never again form a majority government.
It will be interesting to see how they mess up Wales over the next few years.

I'm reasonably comfortable with the idea of Scottish Independence (once we've had the last of your oil) but then we have been used to the idea of being in a family of nations (re Canada, Australia etc) unlike stand alone countries like Germany or Italy.

"As for Margo MacDonald, it's a long story."

Couldn't have put it better Subrosa.

I agree with the post you responded to tho. Margo sounded more bitter than usual today. While respecting her to some extent I grow lately weary of her moaning and her bitterness towards the SNP. Its ashamed she allows it still to trail around with her.

Why oh why wasn't she glad about this today? She actually said it would be tougher now after this. I couldn't believe it.

Suddenly the Unionist Parties (with its media backers) are screaming for a referendum. Who'd have thought it? Less than 24 hours ago it was the last thing they wanted.

Today any SNP MSP interviewed was challenged on the subject. "Why wait til the end of the Parliamentary term? Do it now or else we'll say you're feart!" Talk about childish!

Kenny Gibson made a very foolish response. He said something about waiting until the SNP knew they could win. That is not the policy. The policy is to wait until the end of this coming term and that's for a reason. Its because that is the policy and its also because the SNP will not now allow the media to dictate the timescale just because they now intend to be the ones who are "distracted" by a referendum. There is work to do meantime: the worst of the cuts is still to hit Scotland and there are clear policies to get in place now that the much-needed majority is there. I think Salmond should stick to his timetable.

Wonderful clash between MacWhirter and McTernan on NN Scotland tonight. McTernan said we know there will not be a referendum because the Scottish Parliament doesn't have the authority to call one. MacWhirter actually laughed at him, then tried to reason with him and ended up telling him, " Your approach is why Labour lost so badly yesterday!" Ouch.

Kenny was right in some ways Jo but I see what you mean.

I've been like a parrot since blogging because I think the Scots are far more cynical than they were in 1979. We need to provide the electorate with every little detail - and be very honest - before a referendum is called. We don't have detail and that's why Eck wants to start with the Scotland Bill.

No longer will people vote on the word of politicians. They want to be able to research facts and figures before they decide.

Of course the Unionists will have their own facts and figures...

Aye, I saw the spat between McTernan and MacWhirter on Newsnicht. MacWhirter 1, McTernon 0.

The last of North Sea oil may be far sooner than you think. With the tax Osborne imposed upon them many are seriously considering taking their skills to other parts of the world.

There is a part of this that everyone seems to be missing.

People are totally sick of both of the old parties. Labour just had 13 years to fix britain, and the tories didnt do a lot better before that.

The lib dems just messed up and leave voters nowhere to turn.

In Scotland we are so lucky to have the SNP whose policies seem for the most part to be workable, and people vote for them not as rabid nationalists but as common sense - neither Labour nor the Tories have Scotlands best interests at heart.

If England wants the same, then it has to find better options than the BNP or UKIP.

Subrosa we do indeed need detail. I have seen already disturbing posts elsewhere which seek to exploit reservations and turn them into all out fear of an independent Scotland.

I heard a programme from Galloway last night on the radio where he was on about passports, immigration controls, the Euro, and presenting Scotland as something the size of Millport which had no chance of survival on its own.

Understandably his massive ego took a kicking but he deserved that. I do admire his eloquence at times but he came here this election, trashed our Parliament yet still expected to be elected to it. What arrogance. That he now seeks to spread fear by talking complete nonsense is quite disappointing.

Well done Scotland and hearty congratulatons at finally breaking the back of the red monster that has been your bain for so long...Good luck and may your journey from here be filled with blessings!

Sandy, this was written and posted by one of my co-authors OldRightie. He's having a day off (blogging) today but I'll ask him to respond when he can.

Jo I heard Galloway too. He sounded bitter so I changed to R4 after a while.

'There's nought worse than a politician scorned' and him being a Dundonian doesn't help the situation. :)

Thank you indeed nominedeus for your gracious comment. It's much appreciated.