Sold To The Lowest Bidder 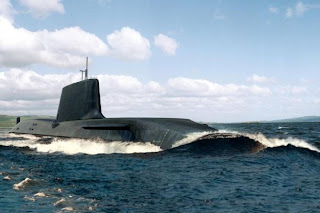 It's common knowledge the Ministry of Defence have to save money and now they've dealt with sacking members of the military, changing military personnel terms and conditions and cancelling orders for equipment badly needed, what was left?

How about Britain's nuclear bomb base at Coulport on the Clyde?

The SNP is opposed to a nuclear fleet and I concur with their policy, however I understand Angus Robertson's concern when it was announced the running of Coulport is to be handed over to a consortium of multinational private firms led by the controversial Lockheed Martin.  That's the same US based Lockheed Martin which analysed the data of the recent Census and which was the recent target of a 'significant and tenacious' hack.

Another multinational involved is Jacobs Engineering which purchased the Gloucestershire based Sula Systems last year although the company website states 'Sula is an independent consultancy with no vested interests'. There is no mention on the website that Sula is no longer a British company but owned by a US business.

Also involved in the managing of more than 200 Trident nuclear warheads will be Serco - the British government's favoured destination for outsourcing - which is unable to keep Scottish hospitals clean.

Despite official reports which have highlighted the dangers of outsourcing vital safety posts such as Coulport, the MoD plan to have the contract finalised in August and for the newly formed company ABL to take over in February 2012.

The MoD insists it will remain in overall charge, with Naval Base Commander (Clyde) retaining overall responsibility for nuclear activities, explosive safety policy, security and emergency management planning although it's highly questionable if they will have enough people to carry out this role as up to 200 Coulport workers have been told that they will be seconded to the newly formed private sector consortium.

“Weapons of mass destruction are the most sensitive areas of military technology and should not be put in private hands,”


William Hartung from the Centre for International Policy in New York and author of a book on the Lockheed Martin said:

"A nuclear weapons depot was much too sensitive to be handed over to a private firm. This is particularly true in the case of Lockheed Martin".

Furthermore, Peter Burt from the Nuclear Information Service in Reading urged the Scottish Government to ensure that the new operational and safety arrangements at Coulport are subject to the highest standards of independent scrutiny and regulation.

As Defence is not a devolved issue I fail to see what influence the Scottish Government can have, particularly when Peter Burt remarked:

“As with virtually every aspect of the Trident nuclear weapons programme, this decision has been taken in secret and we have no idea of the costs or risks associated with it.”


Secret decisions?  No surprise there.  The sooner Scotland can rid itself of these weapons the better.
Tweet
Posted by subrosa at 09:15

Subrosa I do love you, BUT.

The post did make me laugh. I worked for over thirty years in London. We had the Greater London Council who decreed that London was a Nuclear Free Zone! Gosh did we feel safe in the knowledge that come a nuclear war London would not be hit!

It would be lovely to live in a nuclear free world. Sadly the scientists will develop another dastardly weapon. First we had sticks and stones etc.

Sorry, dear Subrosa, it is all a lovely dream linked to a nightmare.

Subrosa, I love you too, no buts.
One of your best articles.

In effect this has been the undercurrent since the fifties that has supported the quasi independence of The UKs nuclear deterrent.

Britain had the theoretical know how but not the cash to develop or build the ironmongery. So we paid for the American Rent - A - Nukes provided the sham of a Union Jack could be painted on them and allow the UK to hold its seat at the top tables.

The euphemisms for this was, and still is called, a 'special relationship' which everyone knows - especially those round the top tables - is shorthand for 'you'll do as your told and pay for the privilege.'

Lockheed and its cohorts have been running the UK atomic facilities from the 80s, and Brown Root running Devonport since the 90s and both they and their cohorts are merely arms-length service providers answerable to the Pentagon neo-cons.

So the only error in SRs post is in the title - neither tender or bid is relevant - it was the price demanded if we wanted Trident to be added to the charade.

And Strapworld -you're right in that we can't put the Genie back into the bottle but that's neither argument, reason or excuse for allowing an idiocy prominence, or even the lies that sustain it provenance.

Strapworld, I think you missed the point of the post. UK PLC is no longer and that's nothing to do with nuclear weapons up here but the fact that the country belongs to others, with the US having a large stake.

It's an insult to British people that the most dangerous weapons stored on their shores (although unusable by us because we need the US's permission) to outsource the running of them. This, like Scottish water, should be in the hands of the public ie government.

OR, you're perhaps not very far wrong there.

Auch Hamish, thanks for cheering me up. I'm happy I made Strapworld laugh though. I believe that's not an easy task. :)

Accurate as usual Crinkly. This outsourcing business is just another method of making vast sums of money for politicians' pals.

Look at care homes. Council care homes were excellent, then they were sold off to the private sector. No quality left.

School meals. They used to be reasonable when they were made in house. Now more pupils than ever refuse to eat them. That's not to say they're poor these days - I wouldn't know to be honest.

I think its a bit rich of Angus Robertson to complain. The SNP gave the same company access to our personal details via the Census. There was a big stooshie at the time about a US company, and particularly this one, being anywhere near the Scottish Census but they gave them the contract all the same.

Very true Jo but he can complain about secret meetings surely?

These multinationals are all part of this NWO of course. Soon my home won't belong to me.

Wouldn't know about that and whether it does or not is none of my business, but on that subject here's something to think about.

Most people in order to get a home are obliged to trawl the market for a fairly substantial mortgage, for which their obliged to forfeit ownership of the asset until the last penny is paid.

Yet under the fractional banking system, the lender only needs in theory, if not practice, to have the capital to cover 6% of the loan that's agreed - £6k for every £100k with, of course the interest chargeable on the £100k = interest at only 1.5% means they have recouped all their exposure within four years.

Conversely if the mortgagee pays all that's demanded religiously for 23 on a term of 25years then falls into difficulty the mortgagor still retains the right to foreclose?

It's right enough when they say all that glitters is not gold - Caveat Emptor.

Jo / SR
The Scottish census wasn't run by Lockheed Martin. I think you're getting mixed up with the census in England and Wales.
Ours was run by CACI International.

RMcG, CACI is wholly owned by Lockheed Martin. LM is its parent company.

Jo.
I don't want to fall out Jo but I can find no evidence of LM owning CACI (UK) Ltd or CACI International.
Can you give me a link to read that would confirm this ?

My God, you don't trust me with anything do you?

Jo.
Well you must admit you do have history ;)

All that glitters is not gold right enough where mortgage companies are concerned. It seems to be a gamble these days.

RM, CACI is another US company. I can't find their association with LM but that doesn't surprise me.

As I said in the post Jacobs Engineering isn't mentioned on the Sula site. It's left to imply Sula is still a British company.

They're all at it.

Jo, I'd make sure the bottle was still corked when you two went for that drink. :)

Take your e-cigarette. That'll upset you RM and you can do your artificial coughing while you enjoy your pint. ;)

Actually RMcG I don't have history! You are pushing your luck.

I had a link earlier which I'd checked before posting and I've been searching for it everywhere and can't find it! But the two companies are closely associated.

Actually I regret very much that something wasn't organised to boycott the Census throughout the UK this year. That the Scottish government went with CACI and forced us to hand over information to a US firm was utterly disgusting. Under the US Patriot Act all US firms collecting information, even if it is collected outwith the States are obliged to make it available for "security" reasons to the US authorities. So confidentiality and DP do not apply to any Census Form completed this year because of the companies who now have that info on their US databases.

Jo.
I checked your link but it just seems to be a list of companies that offer similar services. A bit like the guide you get when you go to a trade show.
What am I going to do with you ? ;)